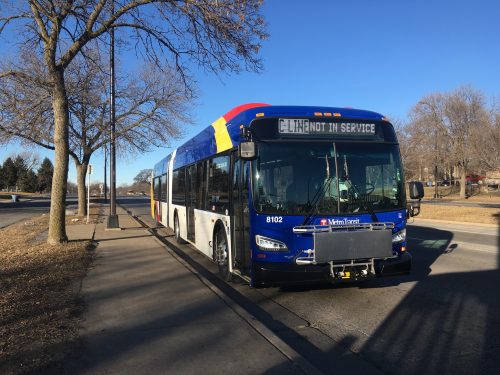 At long last, the C-Line will open on June 8. Pictured is a bus undergoing schedule testing on Olson Memorial Highway in January 2019.

At long last, the C-Line is finally opening!

This Saturday, Metro Transit will begin running the C-Line. The C-Line is intended to replace the 19; it will run on the same route as the 19 between Downtown Minneapolis and Brooklyn Center but it will stop less often. It will use special buses, including electric buses, that are painted differently from the rest of the fleet. The buses will have an extra door for riders to board and exit, and they will have USB chargers. Just like on light rail, you won’t be able to pay onboard. You’ll pay before you board at a station (except on 6th Street; see below), and Metro Transit Police will patrol the buses to make sure you’ve paid before you board.

When C-Line operations go into full swing at 10am Saturday morning, service on the 19 will be cut. From that point forward, the 19 will only operate every 30 minutes, and will operate from as early as 2:30am and end as late as 11pm. Before the C-Line opens on Saturday morning, there will be extra buses to supplement the frequency of the 19.

To celebrate the opening of the C-Line, Metro Transit will have an opening ceremony and ribbon cutting starting at 9:30am. The first C-Line buses – one to Downtown Minneapolis, and one to Brooklyn Center – will depart Penn & Lowry at 10am. Twin Cities NUMTOTers (the local branch of New Urbanist Memes for Transit-Oriented Teens) and busfans from the upper midwest will meet for breakfast at The Lowry Cafe at 8:15am, with hopes to be the first ones on the bus at 10am. (You must be a member of NUMTOT-Twin Cities to view the event; if you’re not a member and wish to join, please answer the questions in your membership request.)

Folks from Move Minnesota, MN350, and the Sierra Club will meet at the festivities at Penn and Lowry at 11am. They will catch the C-Line to Downtown Minneapolis at noon, where they then will gather at Gluek’s at 12:30pm to discuss important transportation news from the most recent legislative session, and ways you can get involved.

If Saturday morning is too early for you, you do have the rest of the day – and the weekend – to ride it. The C-Line will be free for all of Saturday, Sunday, and Monday. There will also be other events happening along the C-Line corridor that, while not necessarily tied to the launch of the C-Line, shows what makes a community special. This weekend, instead of just riding the C-Line, take a moment to get to know what’s in the community, and participate in it. Have a great weekend!

Positive Image Minneapolis “fosters youth empowerment and leadership through life skills development, health awareness and education” and works with “educational systems, corporate sponsors and the community”. On Saturday morning, they are hosting a breakfast at UMN’s Urban Research and Outreach-Engagement Center to address men’s health issues, as well as provide financial education. There will also be an update from Senator Jeff Hayden.

It’s been nine years since the Goddess of Glass & Friends first opened their door on 44th & Osseo Road. To celebrate, they are giving away free cupcakes and doing a prize drawing. They will also be hosting Backpack Project MN to fill backpacks with essentials for homeless youth.

I didn’t hear about this until Metro Transit advertised this on their website. The City of Brooklyn Center is organizing a series of pop-up markets this summer, with the goal of increasing its residents’ economic stability and cultivating new and existing businesses and startups. There will be food, jewelry, clothing, arts and crafts, and much more. 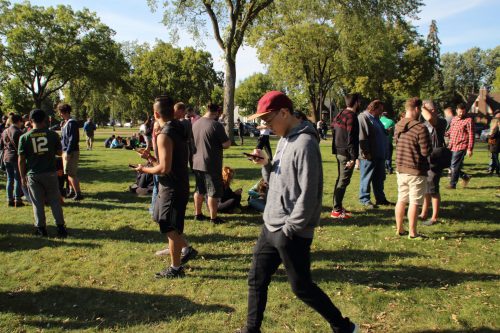 When I first heard about this, I honestly didn’t realize that Pokémon Go is still a thing. For the uninitiated, Pokémon Go is a scavenger hunt game where one uses real life places to collect creatures called Pokémon and trains them for sport. Don’t get me wrong – Pokémon was one of my favorite shows growing up, but it’s been quite a while – at least 10 years – since I last saw it. But it’s very much alive.

Echo (he/him/his) is the founder, organizer, and facilitator with MN PokéCon. Echo, along with 30 other volunteers, put on all events related to Pokémon, including tournaments, conventions, launch parties, and the monthly Pokémon Go Community Days in the Twin Cities. Echo tells me that those who participate are interested because they have an interest in Pokémon, particularly in a new Pokémon that will be released on the day of the meetup by the game’s creators. Still, others do it because it’s fostered a sense of community and has encouraged people to explore new places.

This Saturday, Pokémon Go players will once again descend on Victory Memorial. MN PokéCon will be there to provide the support they usually do, including distributing water and helping players out with catching a new Pokémon. Echo does note that the meeting spot may move, so follow the Facebook event page for updates.

New Leaders Council’s “A Seat At The Table”

Join the New Leaders Council as they graduate their latest cohort of changemakers. The New Leaders Council is a six-month leadership development program that “empowers forward-thinking young professionals from outside traditional power structures to create social change in our communities”. Refreshments include hors d’oeuvres from Afro Deli and a cash bar. Guante, a local rapper and spoken word artist, will perform. Tickets start at $50.

If you plan to ride the C-Line within Downtown Minneapolis on 6th Street, it will be tricky. Because the stops on 6th are temporary, Karyssa Jackson, Community Outreach and Engagement Coordinator for the C-Line, tells me that Metro Transit “does not plan to add ticket vending machines and Go-To card readers to those stops”. However, she also made it clear that “no one may ride for free”. Unless you are transferring from another bus or paid through the mobile app, there is no way you can pay for a trip on the C-Line on 6th Street, even if you’re just riding through the Downtown zone. For example, if you’re at Hennepin and need to ride to HCMC, and the C-Line just happens to be there, and that you’re not connecting from another route, you can ride it. BUT: know that you can’t pay for it and that you can be charged with a misdemeanor and fined $180 if a Metro Transit Police officer catches you. You have been warned.

3 thoughts on “Your Guide To C-Line Opening Day Events”