Public transportation policy and funding in Minnesota over the past several years – if not decades – has focused on roads, bridges and airports.  As Minnesota’s population changes, these modes alone cannot satisfy all of our transportation needs.  The time has come for investment in a truly multi-modal transportation system.   Many Midwestern states have invested in intercity passenger rail and have seen tremendous returns in economic development, mobility, and environmental benefits.  This article explains why Minnesota should invest in more passenger rail as defined by MnDOT.

The Proposed Passenger Rail Improvements and Investments section of the overall MnDOT Rail Plan of 2015 outlines the plans for development of the Minnesota Intercity passenger rail network and a shows a map depicting the future environment, as envisioned in 2015.  The substance and progress of planning has changed over the past five years.  My intent is to update the status of relevant portions of this plan as they exist today and discuss requirements to fund the initial planned implementations.

The updated map we will reference has been prepared by All Aboard Minnesota, a 501(c)(3) passenger rail advocacy and education organization. The map has been updated to encompass current and future Minnesota intercity passenger rail corridors, within the over-all regional network.  It should be noted that the reference materials and interpretations of current plans are sourced from All Aboard Minnesota

A clarification may be needed here.  Sometimes there is confusion as to what constitutes “intercity passenger rail”. Simply put, it is any passenger train route that serves two or more metropolitan areas.  In the United States these trains are predominately operated by AMTRAK . Examples are the Empire Builder which serves towns and cities from Chicago to the Twin Cities to Portland and Seattle, and the Hiawatha service between Chicago and Milwaukee.  A broader view of passenger rail would include “commuter rail” and “transit rail” (LRT and streetcar) which generally serve one metro area, and are not within the scope of this article. 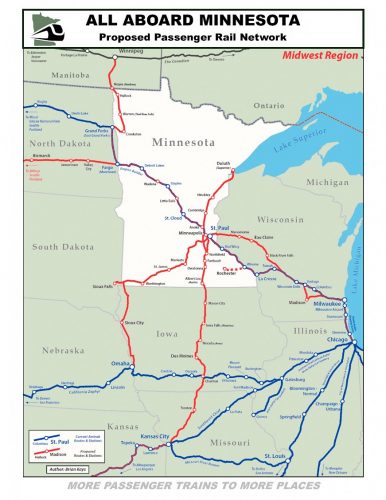 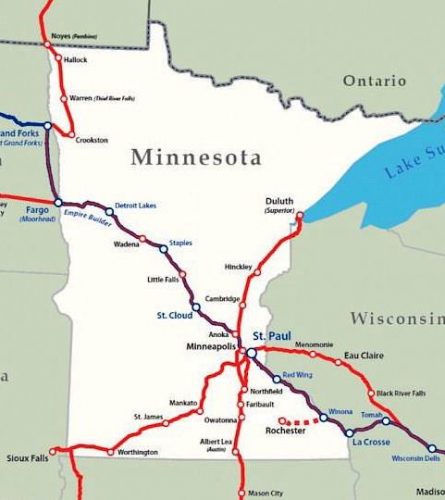 The Midwest Region and a Closer Look at Minnesota

A VISION OF THE FUTURE

Note that over 30 outstate-Minnesota communities would receive new or improved passenger rail service. This provides the backbone of a robust public transportation system, integrating with local transit systems and shared ride services…eventually automated vehicles…for door-to-door multi-modal mobility throughout the State.  For an interesting perspective on this, see the recent post on streets.mn – Intercity Rail Would Bridge Minnesota’s So-called “Rural-Urban Divide” – which also contains some informative links relevant to passenger rail development.

There are many economic, mobility and environmental benefits that more passenger rail service offers.   A recent study of the benefits of the proposed 2nd Train to Chicago  details categories of these benefits which “could generate total annual economic returns in the range of eight- to ten- times Minnesota’s annual net spending to support the service”.   Similar savings can be realized across the network.

There are many economic, mobility and environmental benefits that more passenger rail service offers.   A recent study of the benefits of the proposed 2nd Train to Chicago  details categories of these benefits which “could generate total annual economic returns in the range of eight- to ten- times Minnesota’s annual net spending to support the service”.   Similar savings can be realized across the network.

Before commenting on the Minnesota Rail plan status, it is worth noting that other Midwestern states have aggressively pursued improvements to their state rail systems…shown in blue…most notably Illinois, Missouri, Michigan and even Wisconsin which is increasing Hiawatha frequency to 10 round trips per day.  Both Illinois and Michigan (not pictured here) have converted large portions of their rights of way to 110 mph capability.  States in other areas of the country; including, Virginia, North Carolina, Florida, California, Oregon and Washington are also building out their passenger rail infrastructures, largely for reasons of economic competitiveness, and have seen these new services fill up rapidly and generate economic development .

By way of contrast, progress on the Minnesota Passenger Rail plan has been lagging for years.  The principal reason is lack of funding.  The current funding environment in Minnesota, Wisconsin, and at the Federal level …pre-Covid-19…appears to be much more favorable during the current legislative session. The impact of the pandemic remains to be seen, but could drive more infrastructure spending.

Conditions on the freight railroads are also more favorable to accommodating passenger trains.  Shipments of oil, fracking sand and coal have greatly diminished since 2015.  Passenger traffic is recognized as one opportunity to monetize excess capacity.  In addition, many of the necessary infrastructure improvements, such as Positive Train Control and double tracking, have been completed by the railroads in the intervening years.

PROJECTS TO IMPLEMENT THE PLAN

Development and implementation is being done within the framework of Private-Public-Partnerships among the States, active freight railroads and Amtrak.  When implemented, the freight railroads maintain tracks and operating infrastructure, Amtrak maintains equipment and operates the trains. The State provides funding for required upgrades and equipment, and covers operating shortfalls, offset by matching funds provided by the Federal Government.

Phase 1 – The following plans are in currently in active development

Emerging Corridors – formerly phase 2 developments in the 2015 plan.  $5 million has been included in the House Omnibus bonding bill for initiating or reinstating route planning for the following:

WHERE DO WE GO FROM HERE?

If the past is prologue – not very far.  A streets.mn piece from 2015 “Second Train to Chicago: Still Running Late” expresses the frustration in lack of progress two and one half years after the second train study was initiated.  Here we are another five years along and still looking for funds to get the 2nd train on track.  The same can be said for the NLX…two years after the project was declared shovel ready…with only minimal funding and little progress made toward implementation.

It is time for the Minnesota Legislature to act. If monies are appropriated, the state can apply for Federal Matching Grants that would fund capital costs in a range of 70-80%, and there are Federal grants available for operating costs in the first three years of new services as well.  But, the state needs to put up money first.  Wisconsin and many other Midwestern States have moved forward to invest in passenger rail as part of their multi-modal transportation networks, and have realized significant benefits.  Minnesota needs to do the same to stay economically competitive in the Midwest, creating jobs, moving people efficiently, reducing greenhouse gasses, reducing wear and tear on highways, improving safety, by improving and utilizing the existing rail infrastructure.

Getting Back on Track?  The Governor and House have proposed funding for Passenger Rail.  The Senate is formulating its Capital Expenditure Bill… 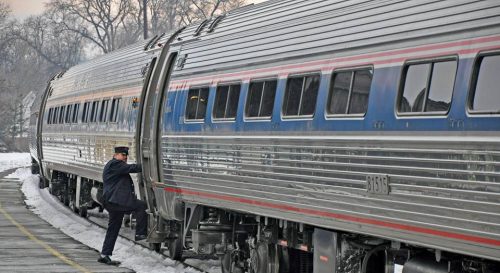 …Time to get back on board to fund the multi-modal transportation future!

30 thoughts on “The Minnesota Intercity Passenger Rail Plan – Getting Back On Track?”