Due to a prolonged, tedious debate over bike lanes for which there is not yet a concrete proposal, St. Paul’s Summit Avenue has been a frequent topic of discussion in the past few months.

In most of these discussions, it seems to be taken for granted that Summit is an expensive and exclusive street. Many of the houses essentially fit the bill for the term “mansion,” and there are plenty of 7-figure property values. The city’s registered student dwelling map shows only three student rental houses on the street in the area around the University of St. Thomas. Summit is not within reach for most people.

I recently spent the weekend in Chicago, staying with friends who live on Logan Boulevard. Like Summit, Logan is a beautiful, desirable street. It has grassy medians, historic homes and churches, and people constantly walking along the sidewalks or sitting in the grass. Though all of the lots are smaller, some of the buildings still have million-dollar property values.

But unlike Summit, living on Logan is an option open to a pretty large variety of people. My friends that are college students working summer service jobs can afford to live in a nice triplex there. Meanwhile, as a Macalester student, it is nearly impossible to imagine students renting on Summit.

From Logan, we can envision the future attainable by legalizing neighborhood-scale density, particularly in our least affordable areas. The smarter zoning and land use on Logan shows us that Summit Avenue doesn’t have to be a wealthy enclave carved through St. Paul’s western half. And while Summit is a particularly out-of-reach strip of the city, learning from Logan’s better land use policies could make the whole city more accessible.

Anatomy of a Chicago Boulevard

Chicago’s Logan Boulevard shares a lot of characteristics with St. Paul’s Summit Avenue. The street design is nearly identical to the stretch of Summit near Macalester College, with a main thoroughfare and two green medians: 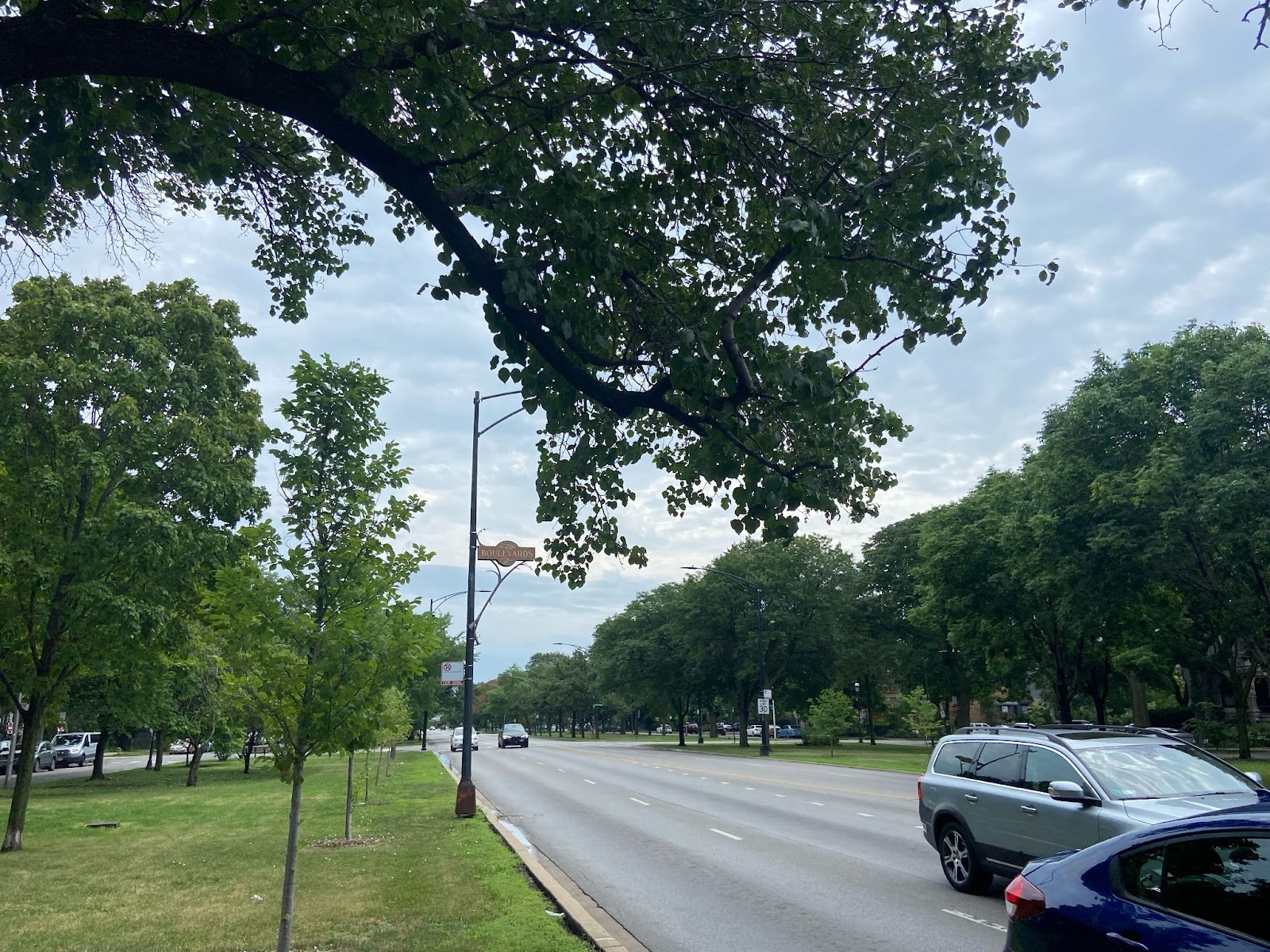 The biggest difference between the two streets is in the type of housing that exists. It is much denser, as a representative picture below shows: 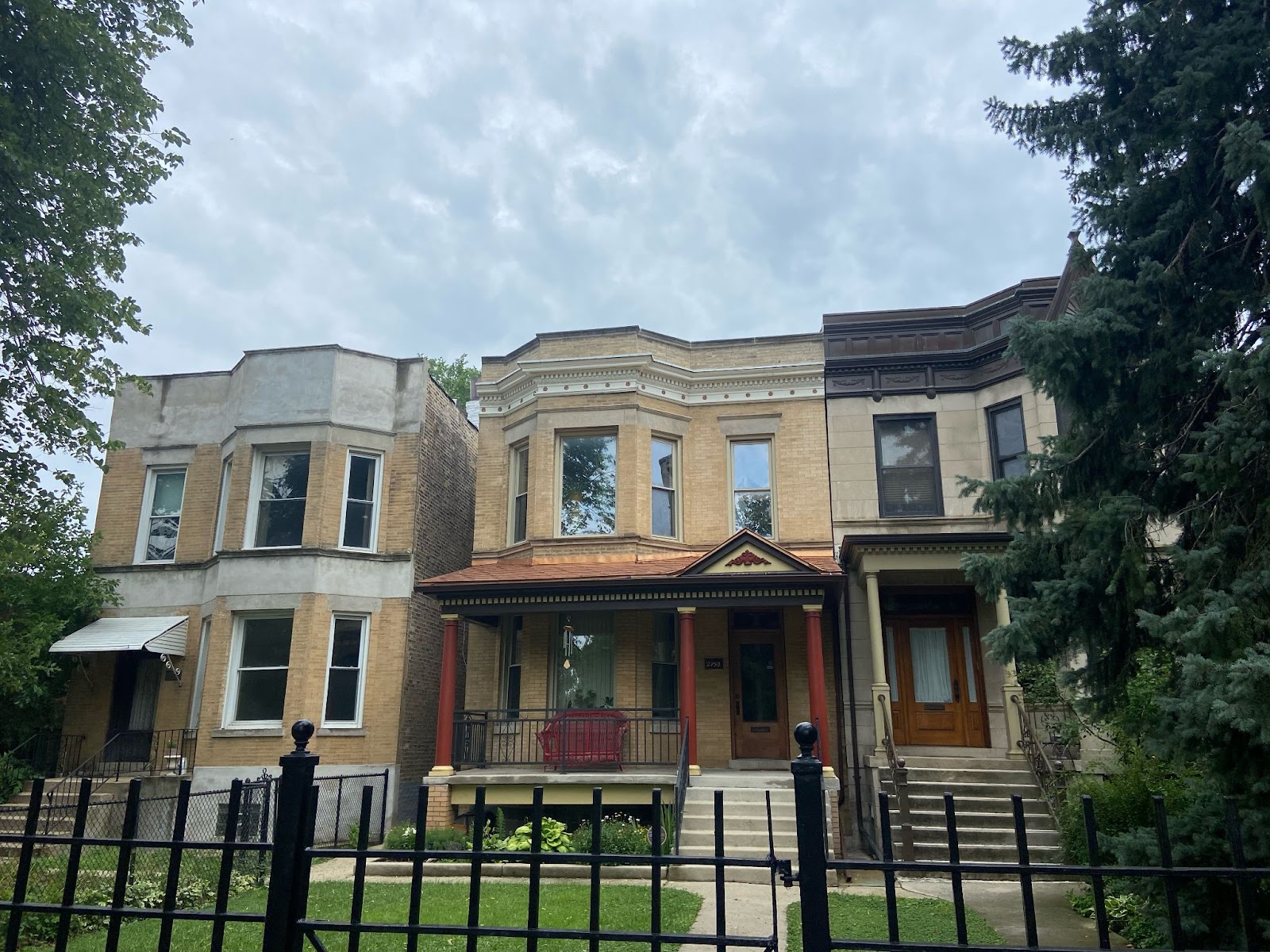 One of the most immediately apparent differences is the lot sizes and side setbacks. The buildings are on much smaller lots than most of the large lots along Summit, and they use a greater portion of the land on the lot. Many of the buildings are within a few feet of each other or fully touching, whereas housing on Summit tends to be spread out.

In addition to the more efficient use of the available land, there are far more housing units. Even though the above buildings are smaller than many of the more mansion-like Summit homes, most of them are multifamily apartments. The friends of mine that lived on Logan Boulevard lived on a single floor of one such apartment, with other tenants both above and below them. Most of these quasi-townhomes appeared to have 2-4 units of housing.

There were a couple other noteworthy elements of the land use along Logan. Ostensibly single-family homes were still mixed in all over: 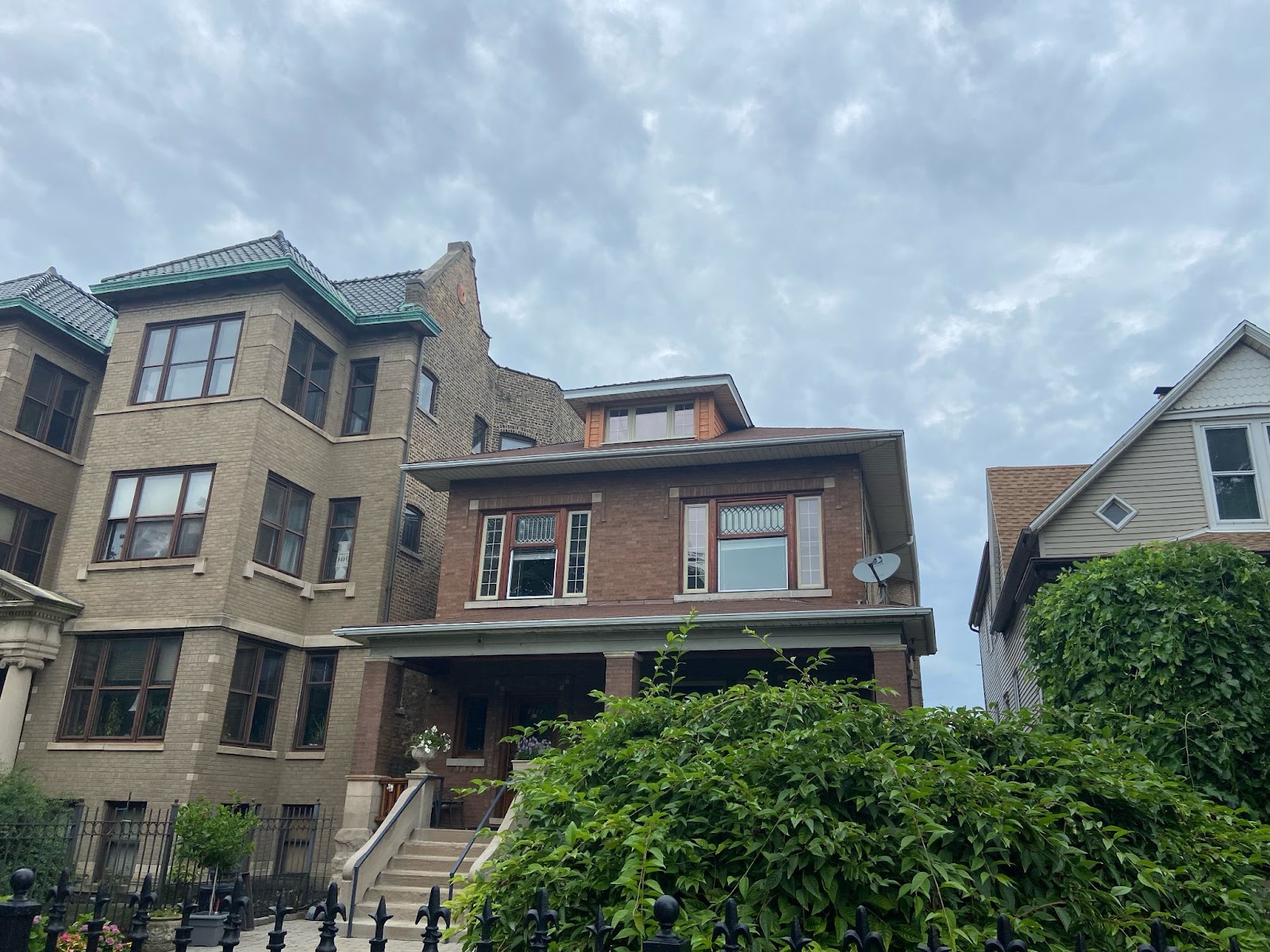 And on street corners, there were often larger apartment buildings that had a more built-out feel, with retail storefronts on the first floor. 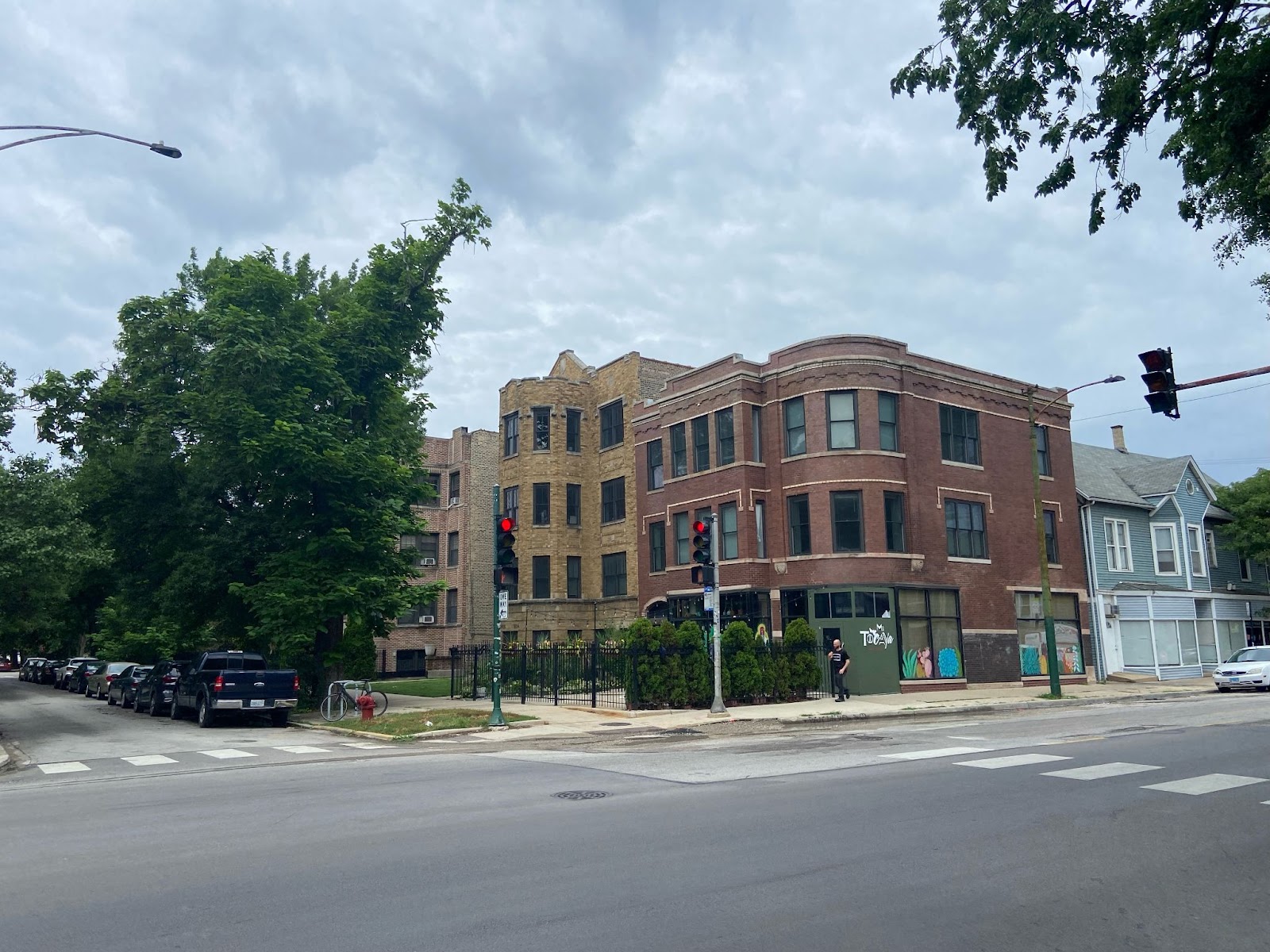 All of these elements made for a vibrant street that was wonderful to walk down. As a matter of urbanism and pedestrian experience, the street was well designed. But more importantly, this kind of land use is good for housing affordability.

The denser and more efficient land use in Logan has two big benefits relative to large-lot single-family zoning: it increases the supply of housing while reducing the marginal cost of housing.

A greater supply of housing can help change the bargaining power between renters and landlords. When many tenants are lining up to get a single unit (as in New York City), the landlord can charge higher rent or discriminate against potential tenants. When landlords are having a hard time filling their units, they have to lower rents or offer additional benefits to tenants. This boost to housing supply is especially important as the Twin Cities population grows, and fights against a persistently low rental vacancy rate.

Denser housing will also tend to have lower marginal costs. For a landlord that owns a three-story building with a unit on each floor, each floor is relatively cheaper to maintain, both because the units are smaller and because the fixed costs (land, certain infrastructural needs) are shared across the whole property.

These smaller apartments do what mansions can’t: they meet a diverse group of people’s needs. Here’s a slide from a recent St. Paul planning presentation: 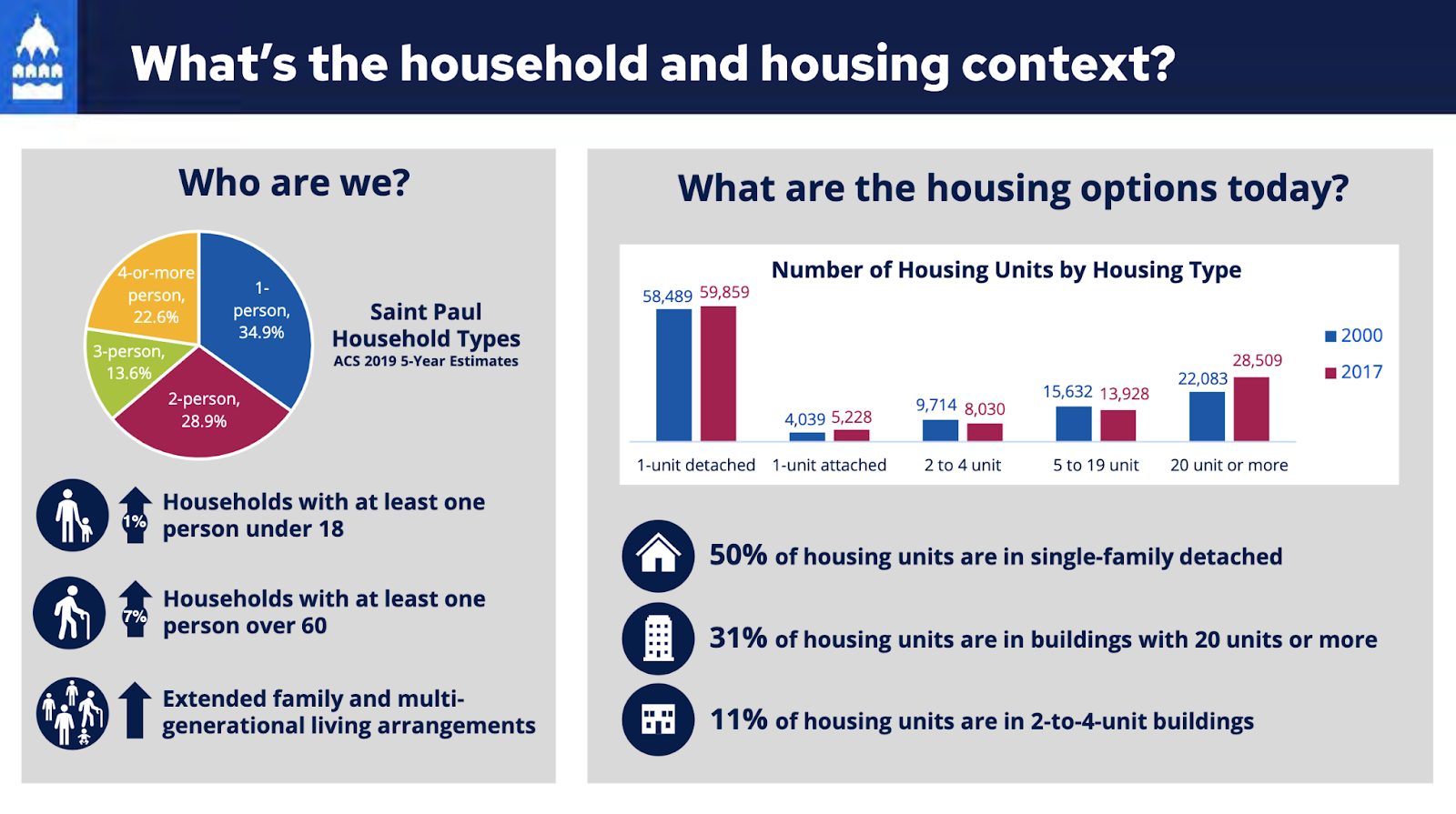 The city’s population is seeing a relative increase in households with seniors, and with multi-generational living arrangements. The dominance of single-family homes, which is mandated by zoning, leads to mismatches. These homes might work well for a nuclear family, but they’re less likely to work well for empty-nester parents, or multi-generational households that want a close-by but separate dwelling for the grandparents.

Zoning for neighborhood-scale density offers people the flexibility to make housing decisions that work for them, both in terms of location and dwelling type.

Some people might choose to live with less space or a shared wall in exchange for cheaper rent or a better location. But as Logan shows us, many people are happy to make that trade. Plenty of college students will take a triplex with less living space in exchange for an affordable spot close to campus; zoning should allow people to make these types of decisions.

The Future We Could (and Should) Have

This style of development already exists on a sizable stretch of Summit Avenue, where the zoning level is RT-2, or “townhouse residential,” meaning that 4-unit buildings are legal. There are apartments, and they don’t disrupt the street’s look or user experience — if anything, they make the street more vibrant by adding inhabitants to the street. See the apartment below, on Summit and St. Albans Street:

Single-family zoning regulates this type of housing out of existence for no good reason. This is a bad thing for Summit, and it’s bad for the large swaths of the rest of St. Paul that are zoned for single-family — all of the yellow in the below map. 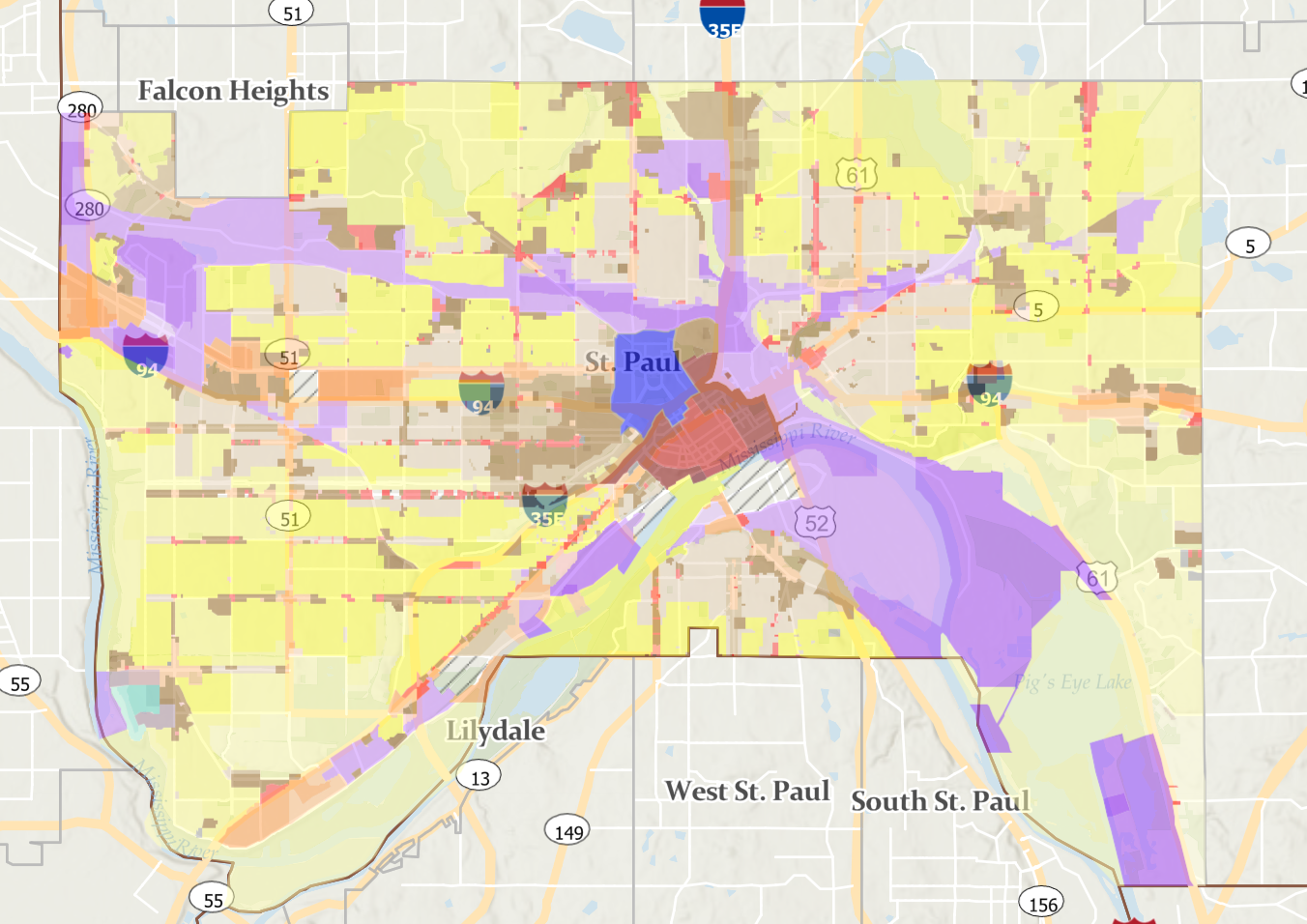 It’s not just the headline “single-family” restrictions that hurt us all. One lesson to take from Logan Boulevard is that good zoning includes a suite of policies across the zoning code. Allowing two-to four-unit development should also come with adequate changes to setback requirements, floor-area ratios, height limits and so forth.

This future is about to be gifted to us by the staff at St. Paul Planning and Economic Development. One of their current projects is the 1-4 Unit Housing Study, in which they will offer options to allow for more Logan Boulevard-style development in our city. Duplexes to fourplexes, townhomes and carriage homes could abound.

Of course, regulatory changes can’t solve all of our housing problems. Tenants need to be protected in other ways, and neighborhood-scale density won’t provide housing for many of the poorest people. As we fight to end single-family zoning, we should also fight for policies to support these related goals.

The first round of public engagement on the 1-4 Unit Housing Study showed some positive responses from St. Paulites, but expect the issue to become more prominent and polarized when it comes to the City Council around the end of 2022.

As coalitions coalesce around this issue, don’t forget that this kind of rezoning would be a win-win in our city — a boost for renters and property owners alike, increasing housing supply and choice while making our city a more vibrant place.

18 thoughts on “Envisioning a More Affordable Summit Avenue (and Rest of St. Paul)”