There has been a lot of discussion across the internet lately about how we’re digging ourselves into a financial hole by overspending on infrastructure that isn’t very productive. Chuck’s post a few days ago called Paved with good intentions is a good example. For the purposes of this post, let’s just assume we agree with Chuck, and that something needs to change in the way we view infrastructure.

As many of our bridges continue to age and the list of bridges that need repaired or replaced continues to get longer, at some point, we should consider whether or not all of our existing bridges are worth replacing. I think most people would agree that there are probably a few bridges out there where the replacement costs are simply too great to justify the expense, but how do we determine which ones? This is a difficult discussion to have, in part because for every bridge that I might consider removing, I can think of two others that we should consider building (for example, why have we never constructed a France Avenue extension over the railroad tracks to Lake Street?). Removing a bridge will almost always be unpopular with the neighborhood, but inherent in this discussion is the understanding that we’re going to have to make difficult and unpopular decisions.

The Stillwater Bridge immediately comes to mind as a candidate for removal simply because of the unusually large replacement costs, but I’ll leave this case study for others to consider.

Instead, here are some of my ideas about a few local bridges: 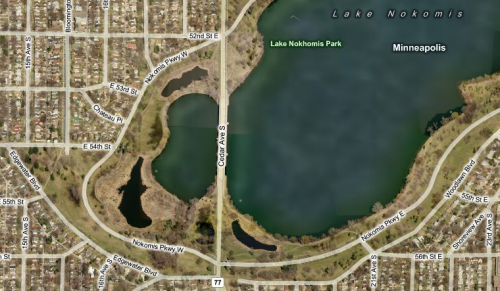 The Cedar Avenue bridge over Lake Nokomis (map) was dubbed Planning Blunder #9 by Streets.mn authors Bill and Alex. This bridge is a clear example of a roadway that went over when it should have gone around. In hindsight, I think nearly everyone would agree that if we could start over, we’d make a different decision about this bridge. But now that it’s in place, does it make financial sense to remove it? From an engineering standpoint, traffic could certainly be re-routed west along a reconstructed Nokomis Parkway with a few intersection and signal improvements (which would actually allow the City to tackle a few longstanding traffic, parking, and design issues they’ve had around Fat Lorenzo’s – hello improved outdoor dining area!). This would probably be cheaper than replacing the bridge, but it would be close. This would be an interesting case study to develop some firm numbers for.

A few years back, the City of Minneapolis conducted a study of the couple dozen bridges spanning the Midtown Greenway. The purpose of the study was to determine the historical significance of the former freight rail trench and the bridges that cross it. Given the purpose of the study, it’s not surprising that bridge removal was not recommended, although it’s significant that the study considered it briefly. The study recommended reclassifying some of the bridges as bike/ped bridges in an effort to buy some time before the bridges would need to be removed or replaced. This is a good idea, but it doesn’t really solve the problem. Eventually, bridges will fall under their own weight even without loading. I don’t think the City has made any final decisions about whether these bridges will be removed, replaced, or reclassified, but a historical designation would surely give them fewer options. The impact of removing (rather than replacing or reclassifying) some of these bridges is not fully known. Since many of these bridges carry only a few hundred vehicles per day, it’s hard to justify the $1.8 million replacement cost. A few of these bridges are probably some of the best candidates out there for full removal.

The 60th Street / Acorn Drive / Pieper Road bridge over I-494 between Inver Grove Heights and Sunfish Lake is hard to justify by nearly any criteria (map). The bridge leads to a cul-de-sac in Sunfish Lake that serves only about 8 (not-as-expensive-as-you-would-think) homes. This is not a short span bridge, and there are at least a half-dozen feasible alternative ways to provide access to these residential properties that doesn’t involve building a bridge. This bridge probably carries less than 100 vehicles per day. RUMOR ALERT: I remember hearing at some point that the owners of these 8 homes had privately funded the bridge, but a quick Google search doesn’t provide any documentation of this. If anyone can confirm or deny this, please let me know by leaving a comment. Privately funded or not, this bridge seems unnecessary (at least, as long as Acorn Drive is a residential cul-de-sac).

This example hits close to home, literally, since I live a stone’s throw from the three bridges over Minnehaha Creek within a few hundred feet of the intersection of Portland Avenue and Minnehaha Parkway (map).  The three bridges – Portland Avenue, 50th Street to the west, Minnehaha Parkway to the east – seem redundant. When I tally up the number of roads (including frontage roads), and the number of intersections that exist within a two or three block area, it seems like with a little bit of careful planning we could eliminate at least one of these bridges and still allow all these roads to intersect. In this case, however, it may not be economically feasible to do so, even if the neighborhood was supportive. These bridges have very short spans and are also very low (maybe 10′ above creek level?). These will be some of the least expensive bridges to replace (and they have the lowest risk of causing injury or harm if they collapse), so we might find it would be less expensive to simply replace the bridges than to figure out how to effectively remove them.