For the past three years, Minnesota has been visited by a TIGER from the east, who brought bags of cash for us to use on transportationy things.  This year, the TIGER skipped over us, saving his magic bags to open over other states.  What happened?  What did or didn’t we do that displeased the TIGER?

First of all, this magic TIGER is a granting program operated by the US Department of Transportation, and it is not a member of the largest cat species but is referred to as such due to an acronym composed of the words Transportation Investment Generating Economic Recovery.  TIGER’s a bit different from other Federal transportation granting programs because it isn’t specific to a mode; you can apply whether your project is for freight rail, freeways, foot-powered transport, or all three.  The projects just need to be “multi-modal, multi-jurisdictional or otherwise challenging to fund through existing programs” and should have “exceptional benefits, explore ways to deliver projects faster and save on construction costs, and make investments in our Nation’s infrastructure that make communities more livable and sustainable.”  These criteria are both vague and specific; it seems you could sum it up by saying the project just needs to be cool.

Minnesota’s TIGER grants have certainly been cool – the flagship is the rehab of Union Depot in St Paul, which was Minnesota’s sole grant from the first round of funding (2009) and now is nearing completion.  The first was also the state’s largest single grant at $35m, more than the rest of the grants we’ve received so far combined, and tied for 17th largest of all TIGER grants.  The next year brought a $7.6m grant to tiny Staples to build an overpass over a rail line.  Also in 2010 St Paul was awarded a grant for their Complete Streets plan, which doesn’t seem to be in process yet from what I can tell.  Last year Minnesota scored two TIGERs: a $1m grant to Northfield to improve pedestrian infrastructure and build a ped bridge over a highway, and a $10m contribution to Hennepin County’s Interchange project.

So in Minnesota the lion’s share of TIGER money has gone to train stations, excuse me, intermodal passenger transference facilities.  How about nationally?  What kind of project does TIGER tend to pursue?  It turns out that over the life of the program it has been fairly omnivorous:* 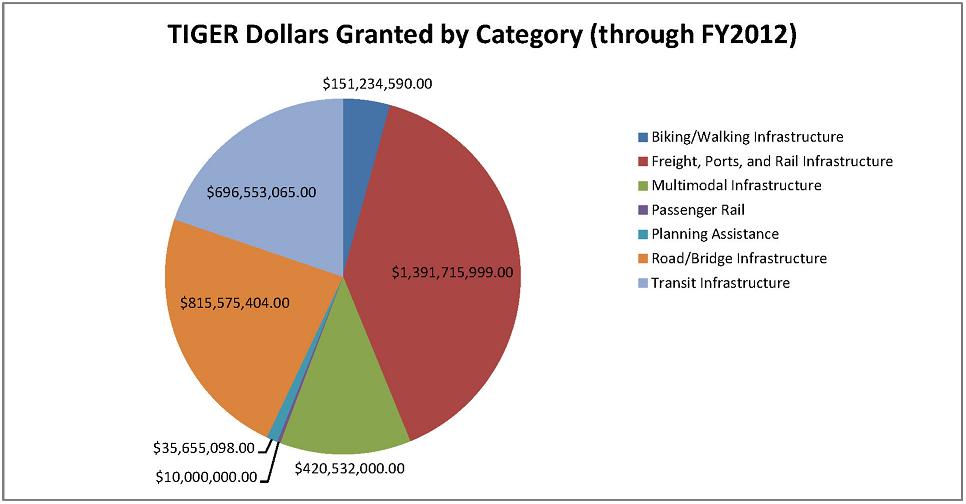 The clear plurality of dollars has gone to arguably the most inclusive category – Freight, Ports and Rail Infrastructure – but a significant portion of the dollars have gone to Transit and Road/Bridge Infrastructure as well. You may be thinking, wait a minute – bike/walk projects cost so much less overall than their motorized brethren, surely they’re underrepresented when measured by dollars!  Actually no, as you’ll see in this pie of number of projects: 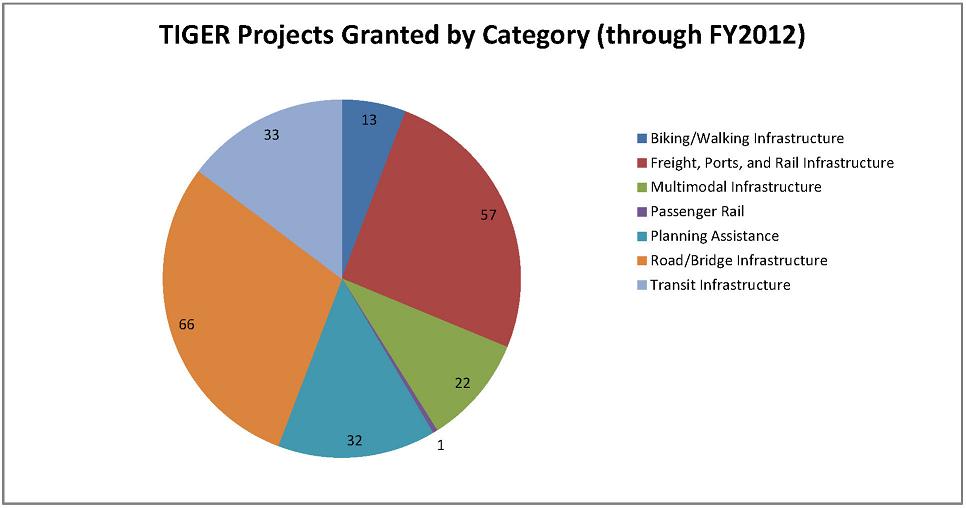 The above two charts show all the money doled out over the four-year life of the program.  Has TIGER changed as it’s grown older?  Was 2012 any different? 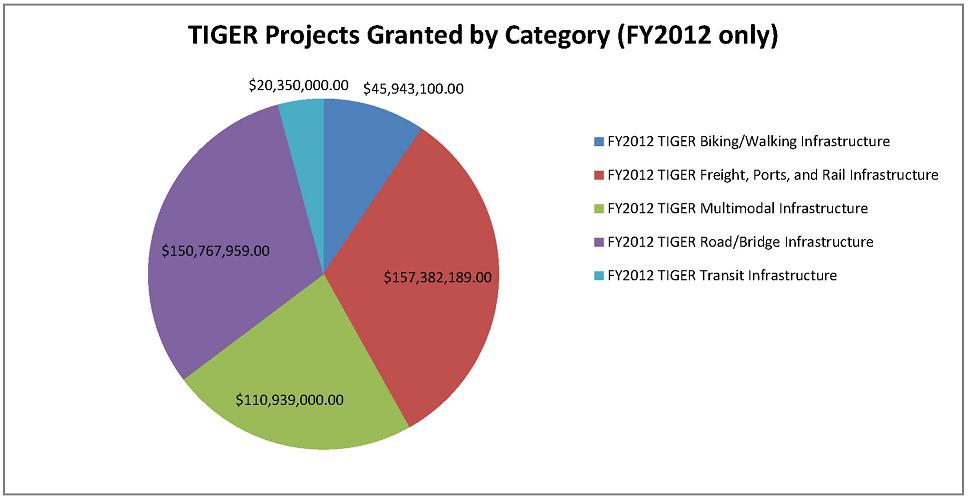 Seems to be (sorry about the change in color for some of the categories – it’s Microsoft’s fault).  Freight, ports, rail, roads and bridges are still dominant, but transit took a big hit – only 3 transit-specific projects were funded this year, compared with 8-12 in the predecessors.  The difference is even more stark in dollar terms – TIGER I funded $387m of transit projects, while there were only $20m doled out to transit this year.  This being TIGER, though, there could be transit components to projects in other categories, and in fact Multimodal Infrastructure was more represented in 2012 than in past years, and that category almost always has a transit component.  Here is the pie by number of projects: 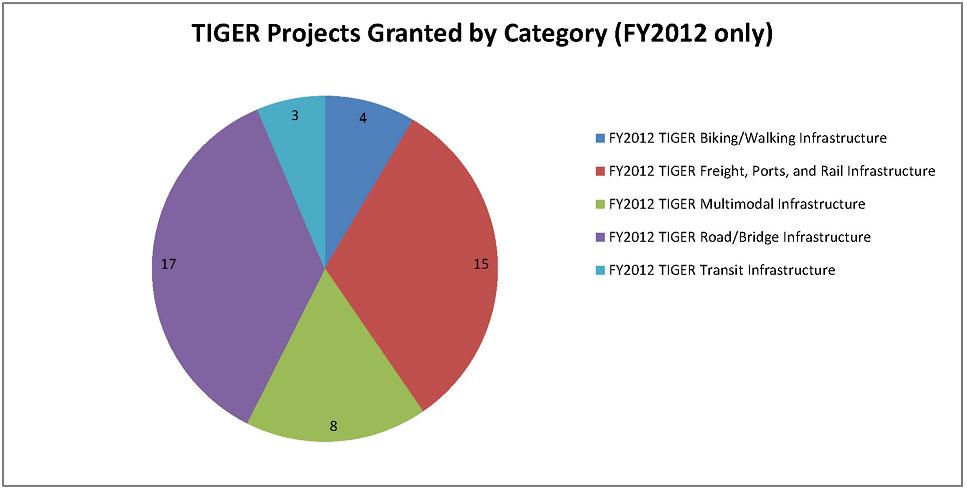 So what does this mean for Minnesota?  Did the state apply only for Transit Infrastructure projects?  (Ha.)  As far as I can tell, no.  I can only find one source indicating the Minnesotan projects applied for this year, and they seem to fit in the most-funded categories:

So it’s a bit of a mystery to me.  And speaking of skunks, you may have heard that Congress passed a stinker of a transportation bill on Friday in which the TIGER program was radically altered.  TIGERs of the future will only accept applications from State DOTs (as opposed to directly from cities and counties), and bizarrely will only fund projects with total costs of $500m or more.  That last provision seems to work directly against the criterium of cost efficiency, and possibly exclude nearly all projects that are “challenging to fund through existing programs.”  Will the TIGER ever return to Minnesota?  Only time will tell… 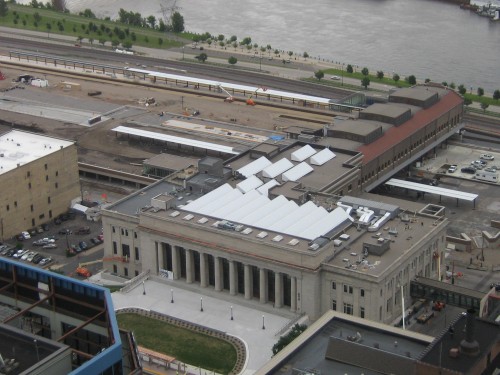 *I put the pie charts together using a spreadsheet on the USDOT website, to which I added the FY2012 projects and standardized the categories.  For example, the original spreadsheet used the categories in the charts for all years of funding except 2011, in which it differentiated between port and freight rail projects.  I used the broader category in part because it was easier but in part because many TIGER projects are truly multimodal, encompassing improvements both to the ports themselves and to the rail lines and highways that service them, for example.  In other words, there is probably room for argument over which category some projects should go into.  Should a complete streets project fall under Road/Bridge Infrastructure or Biking/Walking Infrastructure?  I chose the former unless the project appeared to solely involve restriping to add bike lanes, as seems to the case for Link Detroit.  If you doubt the categorization, check out the spreadsheet and see if you can do better.

2 thoughts on “Minnesota skunked in TIGER 2012”