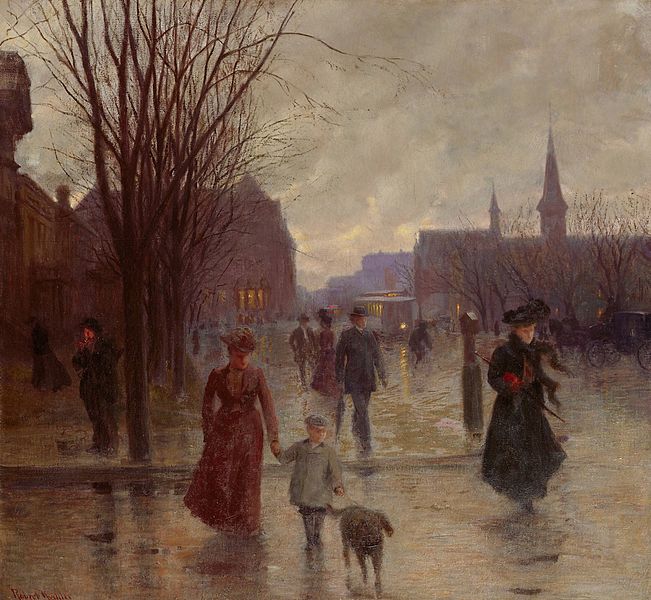 What if we closed Hennepin Avenue S. to through cars? It is illustrated in the adjoining map.

Suppose you created a Hennepin Transit Mall, similar to Nicollet Avenue in downtown or Washington Avenue at the University of Minnesota, with room for bikes, pedestrians, and a high-quality fixed-route transit service connecting Uptown with Downtown (with a flyover/short tunnel somewhere to cross I-94).

Hennepin would be closed at I-94 on-ramps, at 22nd, 24th, 25th, and 26th. The closure in my plan would be half-block (or less), enabling the road to still be used for local access traffic, but not through traffic. The space devoted to car movement could probably be reduced to one-lane in each direction from 26th street to Franklin Avenue, with the rest of the space for streetcar/bus lanes and on-street parking, bike lanes, and sidewalks. Where the road was physically closed, there would be a small pedestrian/transit plaza.

Why would we do this?

(1) There are plans to run a Streetcar down Hennepin (forecast to carry 11,000 – 13,000 riders) plus there are existing buses. If the streetcars and buses had a more exclusive right-of-way, they could provide better service and carry more riders. The road is not able to accommodate the streetcar (at current standards of design and levels of service) and all the existing traffic. If the community truly wants transit to be the primary mode from Uptown to Downtown, the Right-of-Way needs to be turned over to transit.

Streetcars will make left and right turns awkward at best, especially with high traffic counts. Current vehicle traffic counts on Hennepin (2011) are 25,927 two-way at Hennepin just north of 25th street. Lyndale currently carries 14,680 two-way just north of 26th street (though the counts on Lyndale are highly variable, and just a few blocks north it supposedly carries 24,000).[I don’t believe that if we closed Hennepin, all of that traffic would switch to Lyndale, though certainly some would].

(2) Hennepin creates a large number of awkward intersections even in the absence of a streetcar. It violates the existing street grid. It is congested. There is a case in the transportation literature called the Braess’s Paradox which says under certain circumstances, removing a link can save overall travel time. I do not know if Hennepin is such a case (and even if it were, it might only be under certain traffic conditions), but the congestion creates spillovers. There are other paradoxes in transportation about traffic signals, and so on, but the main point I think is that this added capacity is less valuable than elsewhere because of the awkwardness of the network. Roads and cars have problems when intersections are not at 90 degrees and have more than 4 legs. To fix that, traffic engineers at some time in the past further bent the street grid.

New York had this problem with Broadway, which cuts a diagonal through the regular street grid. Its solution was to close it to through traffic i.e. to disconnect it in many places.

(3) More capacity leads to more traffic, less capacity leads to less traffic. This is the phenomenon of induced demand, and is well established, the best local example for which we have evidence is the case of the I-35W Bridge after its collapse.

(4) Closing Nicollet to private vehicle traffic downtown has not seemed to hurt economic activity there.

Why would we not do this?

(3) Removing the link will increase distances for drivers who continue to use their cars to travel between I-94 and Uptown. My estimate is total distance per trip will increase by less than 800m (0.5 miles) for cars, as the hypotenuse does not save more distance than that, depending on where you are going.

Based on evidence about induced demand, some traffic would disappear and some traffic would reroute to alternatives. Substitute routes should see an increase in total traffic. My guess is the most affected route would be Lyndale. If my posited design were implemented, short sections of 22nd, 24th, 25th, and 26th Streets would also see more traffic as travelers from the North peel off from Lyndale to reach places on Hennepin that would have been accessed differently.

There would be fewer traffic conflicts at the remaining Hennepin Avenue intersections, though it wouldn’t go to zero, as sections of the route would still be open.

It gives us an opportunity to straighten the grid. Colfax, Dupont, and Emerson can be reconnected as through routes. We can also remove or modify a number of the traffic calming measures in the neighborhoods abutting Hennepin, as the spillovers would be of a different nature. 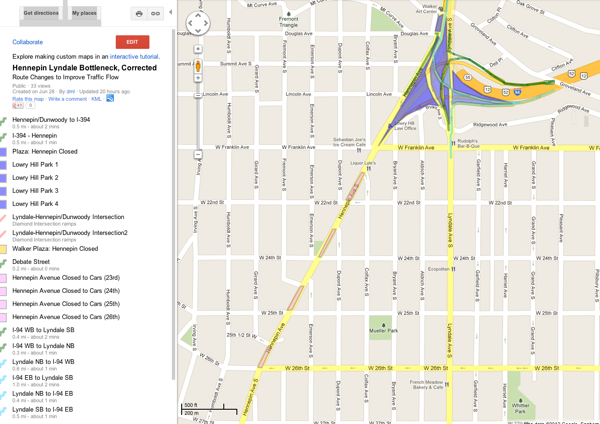 9 thoughts on “What if we closed Hennepin?”