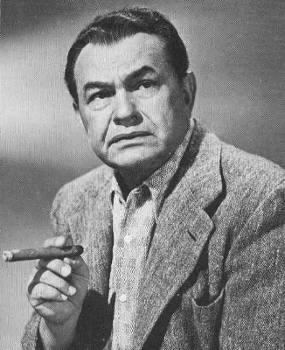 This image of Edward G. Robinson is courtesy of whatever Hollywood media conglomerate owns his image.

This is Edward G. Robinson; I’ve been torn from my eternal slumber to warn you about a dangerous new wave of degeratism sweeping across this country.  But first, some rules: No talking during the filmstrip. No sleeping during the filmstrip. If you have to go to the bathroom, be sure to get some ice for Mrs. Larson’s scotch glass. All right now sit still and we’ll get started.

Crosswalk Creeps – they’re everywhere!  Infesting the arterials of our decaying downtowns…  Lurking in the shadowy corners of the otherwise peaceful neighborhoods of this great land… Someone you know might be one.  You may even be a Crosswalk Creep yourself! 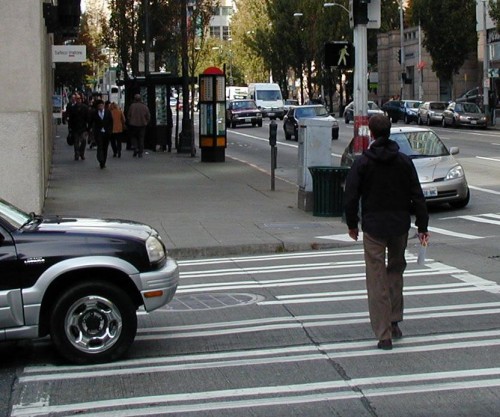 An Incher in Seattle, from a Seattle DJC blog post complaining more coherently about much the same thing.

Crosswalk Creeps fall into one of two types.  The first type is the Incher.  This degenerate is deluded into thinking he has powers of telekinesis that will allow him, if he inches into the crosswalk incrementally, to change traffic lights from red to green. He’s so deluded that he even thinks he can will pedestrians out of existence simply by blocking their sole crossing point across a roadway.

Upstanding Americans know that they can’t force a light to change, no matter how much of the crosswalk they park in.  So stay behind the stop line, for Pete’s sake!  You wouldn’t want to be a Crosswalk CreeeEEEOOUUououououoaplllllloo………

OW! Johnny! Mrs. Larson, Johnny hit me with a spitball!

Johnny! John Anderson, I saw you!  Come here this instant! You just earned yourself detention young man! Constance, please start the filmstrip while I escort Johnny to detention.  Children, sit still and be quiet and no one better touch my glass!

………oooeeeeheheheheheEEEEEehehEHecond type of Crosswalk Creep is the Giddy Skidder. This menace to society thinks he’s so important that he can’t wait a handful of seconds for a crosswalk to clear before he starts to turn. Instead he starts creeping towards the crosswalk, aiming his lethal machine at the law-abiding citizens in the walk. Some of these monsters like to rush to get out of the way of oncoming traffic and instead fling themselves right at the good people on the sidewalk, oftentimes blocking a portion of the walk if there’s a steady stream of pedestrians. 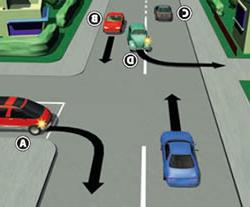 It’s not that complicated: Keep it straight, and don’t be a giddy skidder!

But hey, Mr. Giddy Skidder didn’t hit anyone, so as long as there’s no sidewalk smears there’s no problem, right? Wrong! Not only wrong, but sick and twisted, I should add. You don’t like it when Daddy gets drunk and points a loaded gun at your face, do you? So why would a pedestrian like it when you point your car at him? It’s just as easy to keep your car pointed straight ahead until the crosswalk is clear, and if you really loved America, that’s just what you would do.

[Warbly music fades as the filmstrip runs out, leaving only a relentless flipflipflipflipflip as the film remains on the spinning projector.  This sound is nearly inaudible as a general high-pitched cacophony rose as quickly the closing music faded. Camera pans to Mrs. Larson, who is slumped over her desk. Fade out on now-empty scotch glass.