This map sparked a few disparaging tweets, including a small #twitterwar with a City Council member. As it turns out, people get riled up about parking. It is as if they feel they are entitled to parking and the benefits thereafter. 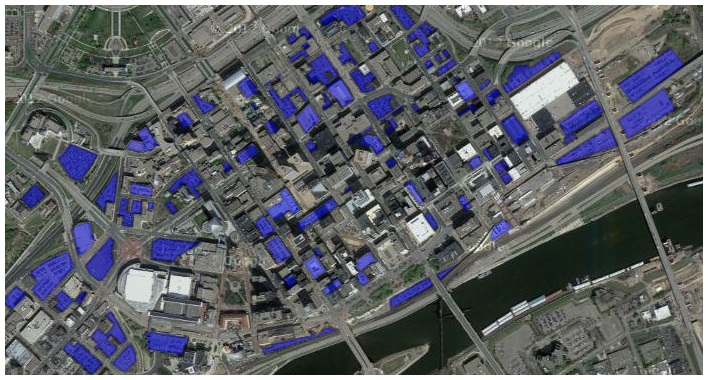 These blue spaces represent off-street surface parking lots and parking garages; but do not highlight on-street or underground parking. Also, they represent only, to the best of my knowledge, available public parking. There are a few more small parking lots but Google Maps limited me to 75 shapes per map.

I bring this up because there’s a debate going on in Lowertown about removing up to 22 on-street parking spaces to expand a sidewalk to accommodate outdoor dining. If you think that 22 spots is a mere drop in the bucket, you’d be right. I went out to prove it.

The rules were simple:

Findings of the “Challenge”:

This is not an academic study. I merely sought out to prove that, under current conditions, a person can drive into Lowertown and park with relative ease and do it for free. I also wanted to mention that I’m keenly aware of the limitations of this challenge (e.g.; time of day, work week, etc.).

Lowertown is arguably the most successful area of downtown St. Paul. Coincidentally, although it has a lot of parking, it still has noticeably less parking than everywhere else. I do not think that is a coincidence. That being said, I think there is something to say about on-street parking.

The opposition to the sidewalk expansion isn’t without a good argument; “Some downtown residents have said that parking lanes act as a buffer between moving vehicles and pedestrians on the sidewalk and that removing those lanes could be a safety hazard.” [Pioneer Press]. This is a good argument straight out of the Jeff Speck Walkable City Playbook. It’s true. Cars can create a great pedestrian buffer zone.

In my mind, this whole debate is moot and has leapfrogged into the realm of ridiculous, including an implied comparison of the construction of Interstate 94 through downtown and the destruction of a historic neighborhood to that of a one-block sidewalk expansion proposal. The sidewalk proposal was also rejected by the Historic Preservation Committee, confusingly so I might add. Why is the moot? Because the real culprit isn’t parking or cafes, and it shouldn’t be viewed under just those two lenses.

This debate about city life (parking vs. cafes) has a uniquely American bend. I say this because we are ignoring the role that the street plays in this debate. Why does a street through the heart of our downtown need to have two through-lanes? Why can’t we impede upon the traffic flow?

We have all of this space for an estimated 5,000 to 6,000 cars per day [MnDOT]. While it’s not downtown’s sleepiest road, it certainly doesn’t have a lot of traffic compared to other areas that many would consider successful commercial, residential and retail streets. For example, this stretch of street has about 1,000 to 2,000 fewer cars than (smaller) Selby Avenue.

One of the failures of St. Paul is that it’s refused to let go of one-way coupling streets; a move that would be likely lauded by planners and citizens alike (with St Peter St. and Wabasha St. being possible exceptions). St. Paul is still being held hostage by out-of-date auto-oriented transportation planning. And worse yet, it’s so ingrained in our psyche that a situation like sidewalk cafes and parking comes into our public dialogue and we don’t even consider that one-way couplings and our tenacity for traffic flow might be our biggest impediment to a successful downtown. Instead, we pit on-street parking versus cafe seating. Little do we consider that, if we were to slightly impede peak traffic flow, that we could actually have both.