Reading about Pat Borzi’s MinnPost article about the on-street parking system ($15 to park on street for Vikings game? Minneapolis smart meters raise rates for big events) hit me right at home. I read this as a raging left-winged Michael Moore fan might watch an O’reilly Factor broadcast – exasperated, frustrated, and wanting to throw the inanimate rectangular screen out of the window.

Okay, maybe I wasn’t THAT frustrated about it. But, to be fair, I am biased because I interned for the city last summer under the engineer interviewed in the article, Tim Drew, and I helped install most of those cool, shiny new meters around the Metrodome area. And, I can say after sitting in many discussions and meetings about how the event rates should be charged, that a larger amount of good than bad has come out of the new “smart” meters.

I understand that the article was written as an unbiased journalist report. In my opinion, it had a sort of Dane Cook effect to it – a verbose, riling, pseudo-passionate presentation to illuminate a very specific problem on an otherwise ordinary subject. Although I give credit to the author for pointing out some of the shortfalls of the meter system, I would like to counter many of the seemingly negative-spun thoughts that were placed in the article.

“Beyond posting maps and information on its website, the city did a poor job getting the word out about these (event-rate) districts.”
Throughout the installation process last summer, much of the effort outside of placing the triangle-shaped meters on the poles was communication-related. Interviews on major media outlets occurred several times throughout the summer, including with KSTP, WCCO and the Minneapolis Journal. All businesses in the Downtown East area were contacted on multiple occasions to let them know what the new meters would bring, when the installations would take place, and what they would expect on Vikings game days.

Also, even if one lived in a cave most days of the year and only came to downtown once in a blue moon, every single pay station in the event zone states when the next event is coming, even if it is a week away. On game days, the electronic screen on each station states that it is currently an “event rate day”, and lists the subject price. Not looking at the station to make sure you don’t have to pay at a certain time is a fault of the user, not the city.

The fact that 33 tickets were issued in September on one street tells me that most of the cars were regular users who used the previously free parking in past seasons. That number diminished as the season went on, which either signifies that less people parked on 4th Street, or more people paid attention after getting that friendly little envelope under their windshield wiper.

In the Minneapolis metered parking world, each area of town is divided up into different zones, and each zone somewhat illustrates ward/neighborhood boundaries. 4th and 5th Street are in “Zone 1”, which encompasses much of downtown west, and the meters on Portland eastward are in “Zone 2”. (Next time you park downtown, note the first number in the 5-digit meter number – this signifies the zone.) Although the rates change throughout each zone, 5th street is often referred as the downtown boundary, and thus illustrates different rates from Portland or Park Avenue. Before the new meters were installed, 4th and 5th Street had free parking on nights & weekends, which meant free parking for almost all Vikings games. With the new event rates, nights/weekends are still free except for Vikings games on 4th/5th. I think this is a fair compromise for the few surrounding businesses that are actually open on the weekends.

“That’s right. Fifteen bucks to park your car on the street.”

I’m sorry, but I don’t really see a huge problem in this. The author made it seem like a big deal that you have to pay that much to park on the street, but it is still some of the cheapest parking around for game days. Last summer, my fellow interns and I did a short walking survey of the surrounding surface lots, and found that most lots within 3 blocks of the stadium charged $20 or more to park. Although on-street slots aren’t the same steal as before (The old meters charged $1/hour in all of Zone 2), they still are a good price.

Also, the $15 rate was also a compromise for fans wanting to linger the streets and bars after the games. As Tim Drew said in the article, “It gets you all the way until the next morning… We got a lot of feedback from fans who wanted to do something after the game, or were worried they might get stuck if the game ran late.” This is EXACTLY what Downtown East and Elliot Park needs – lingering fans wanting to check out the businesses before and after football. Before the new smart meters, all Zone 2 meters had 8-hour limits, so fans could not spend nearly as much time going around to different dining establishments. The $15 event rate lasts you all day, so you don’t have to worry about refilling the meter.

One more thing about the event rates – thanks to the new meter technology, pricing schemes around the area are able to be more appropriately set to match demand. Like stated previously, all Zone 2 meters were $1/hour Daily, including some of the residential areas near Elliot Park. Now, the event rate can accommodate all demand on game day while providing more realistic pricing schema on regular days. Looking at the map below, the purple area north of Elliot Park is now normally $0.25/hr, and no longer charges on regular Sundays. The green area to the west of Elliot park is both cheaper and charges less time: $0.50/hr between 9am-6pm M-F. The old meters had these slots charged $1.00/hr daily, so most of the street was empty except on the 10 Sundays a year. Now, on 355 days of the year, the residents can park where they couldn’t before and don’t have to pay for most of the evening. This compromise was approved by Ward 7 Councilwoman Lisa Goodman and Elliot Park Neighborhood Coordinator David Fields within a few meetings.

This is a fantastic way to better appropriate meter pricing around less desirable parking areas while meeting demand for Vikings games. 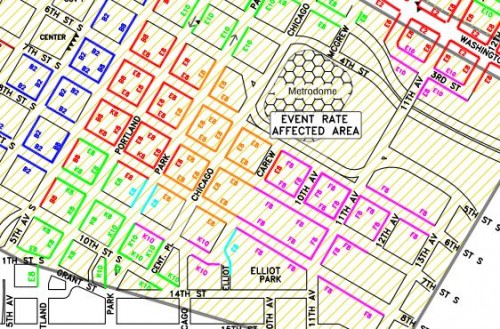 “That CALE won the contract at all takes some explaining.”

In my opinion, the author seems to be stretching his point here. I know I am biased, but I have received 95% positive feedback from a large array of individuals about the new meters and how nice/convenient they are.

But, to do a little explaining on this part: About 5 years ago when Minneapolis was starting to test “smart” meter technology (You made have seen some old test meters like these in places), two companies won different contracts: CALE and IPS. The IPS meters are the ones seen around the U of MN (Which have a completely different parking division from the city) and around St. Anthony northeast of the river. Although IPS are also very good meters and have a very good support system, they did not perform as well in the cold as the CALE meters did, thus causing most of the contract to go to CALE in the end.

CALE also had a better pricing scheme for citywide placement. Although I don’t know details, the bottom line was it was more cost-efficient in the long run to go with the CALE pay boxes rather than the individual IPS meters.

Even though I don’t work for the city anymore, I do think the event rate metering is extremely fair and is extremely efficient for Vikings and Twins games (The normal day pricing scheme for the North Loop is also cheap). The new technology allows metered parking to operate both as a business in the form of event rates, and as a public good in the form of cheaper non-game day rates for the neighborhoods.

Based on simple economics, the event rates on-street now move parking demand lower, which encourages more people to take other forms of transportation into downtown for games (Do I hear the Blue Line coming?). As many posters on streets.mn have stated before, parking can no longer be considered a given right in urban areas, but rather as a luxury good where an appropriate price must be paid.