Take a look at the two images below. If the squiggly red lines didn’t refer to a specific mode, but instead to some pure form of transportation like a wire for an electron, and you had to choose one to rely on to transport your electric self around the city, which would you choose?

Those of us who live and work Downtown might be comfortable with B, but the majority of Twin Citizens would likely prefer the much more extensive system represented by image A. The reality, created by many decades of exclusive official attention to the highway network and neglect of the transit network, is that the region is now largely a dispersed patchwork of destinations rather than a bullseye or cone of growing intensity.

Now, the creators and proponents of the network in image B mostly don’t equate it with image A. They sell it as a step up from our existing transit system but don’t promise it will be as useful or convenient as our freeway system, implying it is the best bone to throw to transit riders that we can afford or justify or some combination of the two. As much as one could quibble with that (cough, richest country in the world, cough, climate change), it is probably a realistic assessment of current political possibilities.

So where can the transit advocate turn for a ride that isn’t on rails, but still extends deep into the suburbs and doesn’t take forever to get there? How about using a network of already grade-separated rights-of-way slithering hither and thither all across this great Minnesotan metroplex? Highway BRT could be our region’s best bet for a speedy, convenient, and ubiquitous rapid transit network. So, in addition to the two highway BRT lines that are under construction or in half-assed operation, the Met Council is planning eight – count em – eight highway BRT lines. While it’s debatable whether or not the quality of these lines will be as good existing and future LRT lines, the sheer distance they will cover make it a decent bet that at full build-out, they will carry at least as many riders as LRT, if not more.

However, while I mentioned earlier the patchwork nature of Minneapolis’ urbanity, not all patches are created equal. Downtown Minneapolis is a patch that stands out both for its intensity of use and for its congestion. These characteristics have combined to create the perverse situation in which the region’s largest transit destination is also its biggest source of delays. Note, for example, that route 4’s scheduled time to traverse the mile between Washington and MCTC is twice as long that scheduled for the mile between Franklin and Lake. 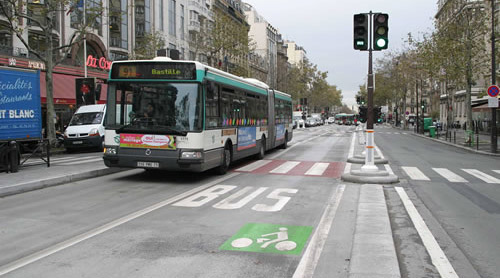 A center-running busway would fit on several suburban Twin Cities arterials, a la Le Mobilien in Paris. Photo by Aaron Naparstek via Streetsblog

It’s these same delay-prone patches of intensity that highway BRT is likely to leave its runningway to serve (kinda like Blue Line LRT is highly separated from Hiawatha Ave, but just a mountable curb separates it from 5th St). The zillions of jurisdictions responsible for transportation planning in the Twin Cities need to keep this in mind when reconstructing roads in major transit destinations, and consider bus lanes to get buses through the chokepoints that litter these areas. We’re talking France Ave in Edina, Excelsior Blvd in Hopkins & St Louis Park, Flying Cloud Dr in Eden Prairie, White Bear Ave in Maplewood, Shingle Creek Pkwy in Brooklyn Center… the list goes on. Basically any arterial being reconstructed in a major employment cluster should be considered for bus lanes.

These lanes may not only be of use for future highway BRT lines. Local routes could make use of a cleverly designed open BRT facility to speed up service and increase reliability. In addition, the Twin Cities has a well-regarded and heavily-used commuter bus system. Why not expand it to suburban employment clusters, such as Edina, the density of which is roughly equivalent to Downtown St Paul?

It’s amazing that local transportation planners don’t even consider dedicated bus lanes when reconstructing lynchpins of the bus system like Washington Ave. It’s possible this is because they are nervous about taking more roadway space away from their precious cars, but bus lanes can actually fit in well with the ecosystem of a neighborhood surface street. Take for example this NYCDOT plan to use a parking lane for buses during the peak period:

Bus lanes work well shared with bikes and right turns, too, as long as you stripe them similar to 5th & 6th Sts in St Paul rather than Hennepin Ave in Minneapolis (it also probably doesn’t help to discontinue enforcement, as Minneapolis did). Of course, the suburban arterials I suggested above pretty much all have enough right-of-way to dedicate bus lanes in addition to cycletracks, right turn lanes, landing strips, etc.

So voters need to talk to these transportation planners’ bosses and tell them that they need to start planning transportation holistically. Hopefully everyone recognizes by now that it’s not the number of vehicles a road carries, it’s the number of people (and stationary or seated people should count too). Similarly, those who advocate for a shift in transportation behavior should recognize that it’s not what mode people are shifting to (e.g. bikes, trains), it’s how many people are shifting. In a sprawling city with an existing successful bus system to build on, buses are going to be the quickest way to get a convenient alternative to the car in the reach of the most people. Let’s speed this process up by speeding buses up. Let’s build bus lanes.