In July 2002, I had just achieved the ‘merican Dream (MERICA!) and purchased a house up on Dayton’s Bluff, within easy walking distance of the Dari-Ette, and a block from an arterial cycling route through the city. In those bygone days, Taste of Minnesota was resident on Harriet Island for the July 4th weekend, and the big St. Paul fireworks were blown up over that area on July 4.

We thought, yes we did: Hey, if we go down to Indian Mounds Park, I bet we could watch the St. Paul fireworks and see some various others in the distance. We can light up our bikes like freaking Christmas trees and just cruise down Earl or Johnson. 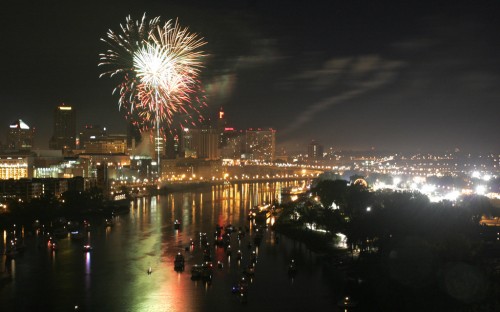 And thus we did, and we discovered a truth of the Bluff: Everyone else on the Bluff, and possibly from 6 other neighborhoods, thinks the same thing. To the full extent that not only does Mounds Park get full in any area without a treeline along the Bluff ridge, but St. Paul actually permits vendors of mini-doughnuts to set up for the festivities. The crowd that shows up is by far the most ethically diverse group of fireworks watchers in the city (or burbs) due to the nature of the Bluff: Heavy on immigrants, who seem to love fireworks and love July 4 and love being in the US. Some definitely show up in the morning and do the July 4 equivalent of all-day tailgating in the park (not in the shelter — that costs money that could be spent on meat for the grill).

Like any large crowd, we had to work to weave the crowd, and also deal with the fact that while St. Paul knows about the festivities and allows food vendors, they do not (of course) provide any traffic control. After all, it’s not official, right? So you have lots of cars roaming around, many of whom seem to be lost, others of whom seem to be treating the pedestrians, bikers and others as large scale Grand Theft Auto or some similar video game in which running over pedestrians gets you bonuses and points.

But, luckily, one of my friends had some money in his pocket, and we were all able to find a quality spot to stand with our bikes and eat from a bag of fresh mini-doughnuts. For America.