I just looked at the number of posts I have in the hopper and its depressing.  I’ve started a lot of them but haven’t finished any of them because I’m trying to address too many issues.  So I thought maybe I should try to keep it a bit shorter (didn’t quite work), but not quite twitter short. So a few issues that have been bothering me…

Transit that Tries too Hard

The first issue that’s been poking its head out lately is that of the Southwest Corridor alignment in Minneapolis.  It’s been driving me nuts for a few years because I’m getting even more tired than I was before of freight rail alignments that are built just because of the cheaper cost.  This should not be just an issue of cost but about the purpose of transit in a system.  Right now it feels like the Twin Cities are just building light rail lines because they decided they want to and it has to serve everyone’s politics, which makes for messy and mutli-serving transit that helps less than it should.

Streets.MN has a great number of posts about the background of this on the SW Corridor, but I wanted to focus on two issues in particular.  The purpose of each piece of a transit network, especially the high capacity parts, and the actual alignment of the line.

Rail lines that are built should have a purpose.  During the regional planning process, corridors should be sussed out based on their need in the overall system, not necessarily because of their technology.  The first reason is that the technology becomes a major issue and argument when people don’t quite understand how each works.  And then second, it devolves into a money issue.  It’s too expensive!! They cry.

Which, by the way Matthew Yglesias, is a great way to build a transit system that is predestined to not live up to its goals.  This quote “with dedicated busways running in highway medians just as decent light rail lines do” killed me.  Highway medians are a good way to deter transit ridership.  Just ask the Harbor Freeway in LA.  Well that made me mad, along with the rest of the post.  Because the issue isn’t bus versus rail.  And don’t get me started on the “just like light rail only cheaper” bullshit.  The reason why its cheaper is that you’re not doing as much!  But this is a political will issue.

Yes a political will issue.  We should have light rail (and subways) for heavily traveled segments that NEED transit capacity.  This means the places where buses that come often are still sardine tins during rush hour.  Even a place like Geary in San Francisco is an issue for BRT because by the time it opens, it will already be at capacity. Should be a subway.  But we’re too focused on cost.

But we do need BRT too!  We should also give priority to buses in places where that means the street will move more people with dedicated lanes.  Take a lane from the car.  But this is the problem, we won’t do it, because we won’t take that step politically.  Too sacred. Political issue.

But this leads me towards the point I’m trying to make.  David Levinson did a cool thing and overlaid the London Underground onto the Twin Cities geography.  What it also reminds me of, is the fact that European Cities like Budapest and Vienna have subway systems that feed the core circulation, while commuter lines perform a different function of bringing people in from the periphery, skipping a lot of stops in the core, while tramways and buses perform another function on the surface of local stop transit.  This is all to say that each of the transit modes has a specific purpose in the network that we try to cram into a single transit project here in the United States.

In the Southwest Corridor light rail line, just like Mike Hicks mentions, you have an alignment that tries to be a commuter line with light rail technology.  All fine but if you’re trying to connect two major employment centers in the American freeway loop, it seems like not just the employment should be connected, but all the major service hungry places on the way that you should be building rail for in the first place.  No more sardine tins at rush hour right?

If I had it up to me, I would build a subway network a la Vienna/Budapest.  Short lines that stay in the historic streetcar suburb core whose endpoints can serve commuter networks and operate inexpensively (because they’ll carry so many people) with 2-4 minute headways meaning no one has to wait very long, boosing transit ridership.  In this same area on the surface, create bus lanes for those corridors that need it and build a central station where commuter rail lines and express buses can connect with the places further afield that don’t need to be connecting every block with the surrounding neighborhoods.  That’s what the surface buses and internal subway network are for.

But that’s a dream right?  We live in the right now, and that right now is light rail on freight rights of way. Unfortunately.  Again, we shouldn’t be trying to cram three purposes onto one train.

Well if we’re stuck in that paradigm we should at least do things right. What drives ridership? Because that’s why we’re building the line with better capacity, to serve a lot of people who are currently in sardine tins.

According to Gary Barnes (writing specifically about the Twin Cities) and Zupan, it’s employment density being served by clustered residential densities.  While the employment provides the ultimate destination which is MOST necessary, riders need to come from somewhere.  So pockets of population density connecting to major employment centers are going to drive ridership, which in turn drives transit success, which in turn drives political will to do more GOOD transit projects.

So where are we at now?  We’re at a place on the Southwest Corridor where a bad decision was made because of the long gone FTA Cost Effectiveness Measure, which has been pushing stupid decisions ever since it was enacted.  The running joke about the model was that the best transit line is one without any stops because it makes the train go faster. But what happens is a lot of freight rail transit lines.  Some aren’t too bad like Charlotte where the opportunities are high, but others are kind of lame.

So what was the bad decision in Minneapolis?  Not connecting people with places they want to go.  Or not connecting popular destinations with the people that want to go there.

The biggest trip on transit is the work trip.  59% of transit trips are work trips, meaning that’s important to people.  But work destinations are generally those of leisure and convenience as well.  So let’s look at the alignment, along with where people who WORK in downtown actually live.

The data below comes from the Census “On the Map” tool, which is an employment dataset with cool mapping features.  Try it out for yourself sometime. 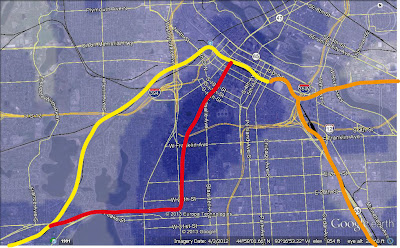 People that work downtown live in the area in darker blue along the red line (the line that should be) as opposed to the yellow line (the line that currently is in planning).  1,700-2,700 workers who work downtown per square mile in the areas that are darkest while only 100-400 in the light blue the yellow line occupies.  See how its REALLY light blue.

I’m sorry if the map is a bit ugly, it’s late and I wanted to get this out, but hopefully the point comes across.  I don’t understand why building something that is useful but a bit more expensive is harder than building something that is of less use.  Perhaps the yellow line would be faster, but that only benefits the suburbs rather than everyone.  Additionally, the people along the red line also have a higher propensity to work in the Golden Triangle further down the line.  See below! 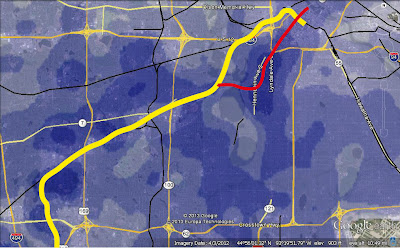 The densities are much less as 200-300 people per square mile living in the darkest blue, but its still something more than the current yellow alignment.

And sure, you could say that it matches the residential densities of the place, but that’s where high capacity transit should go!  In any event, this is just to show that it seems silly that the corridor of most benefit would be bypassed, when it really should be considered more, if only for its long term value to the region.  Yeah, it will cost more if you want to tunnel, but it will also serve an area that has a greater need, and can create greater value in the long run.

If you learn one thing from this post.  Connecting people to dense employment drives transit ridership, so run the transit from where the people live to where they work in the highest densities.  No brainer.

This post was cross posted from The Overhead Wire

46 thoughts on “Twin Cities Alignment Madness and the Perfect Network”