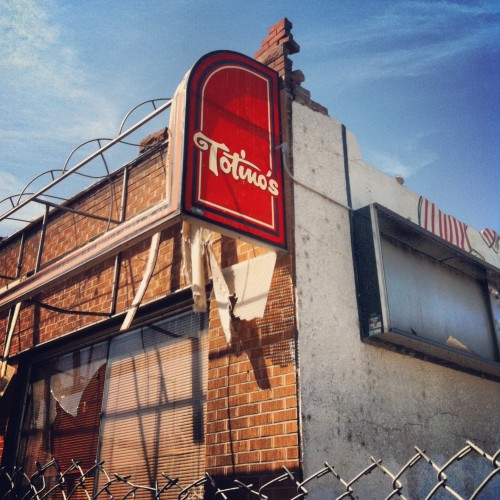 I recently came across this blog post by Andrew Yarish lamenting that the old Totino’s building is being “razed to make way for trendy apartments.” He doesn’t explicitly criticize the development, but his tone betrays his disapproval. I understand the sentiment — this building is cute. But cute buildings don’t make cities great; instead it’s the diverse, kind, and smart people who live and work in buildings that make cities great.

This building happens to be vacant. (I tried to figure out how long it’s been vacant, to no avail. Decades?) There is no one living or working at the old Totino’s building. If they add 10,000 square feet of retail and 130 apartment units in that area, there could be a lot of people living and working in this space. So you take a useless building and repurpose it. Minneapolis’s tax base is broadened. Denser living means more people can walk and bike to work. Businesses in the area get more foot traffic. Everybody wins, right? Let’s take a look at the arguments against the development.

But gentrification. If gentrification means the displacement of (marginalized and down-on-their-luck) low-income renters, then yeah, I worry about it. But this is not taking away low-income housing. The development will take high-income people off the housing market, thereby keeping the prices of other rental units in this desirable neighborhood lower than they would be if the development didn’t happen. So it’s good for low-income renters in the area. If gentrification just means richer people moving into a neighborhood, I don’t worry about it.

It’s ruining the character of the neighborhood. Again, depends on what “character” is. It’s not wise to make zoning decisions (which have huge economic ramifications for tons of people for a really long time) based on fuzzy terms. I think Northeast is characterized by recent immigrants, migrants from north Minneapolis, and a bunch of educated cosmopolitan folks who like craft beer, bike art, and mid-century modern furniture, so I think this development is in keeping with the character of the neighborhood. If you think the character of Northeast that’s worth defending is in its working-class Eastern-European roots, I have three points. A) That’s factually incorrect today, B) it has disturbing racial ramifications, and C) the destructive force that’s really to blame is the structural shift in the global economy, namely the outsourcing of industrial and manufacturing jobs, which you have to concede would’ve happened with or without the construction of luxury apartments.

The Totino’s building was soooo cute! If you think you can move into a neighborhood after a couple semesters at the U — or as a transplant from Portland — and decide that your Instagram followers get so much joy from your precious #ruinporn that their interests outweigh those of the people who want to sell their vacant properties to make way for apartments and shops, you should consider checking yourself, because that might come off as a little entitled.

If there are arguments against the development that I didn’t mention here, I’d love to hear them.

7 thoughts on “In Defense of the Totino’s Apartments”