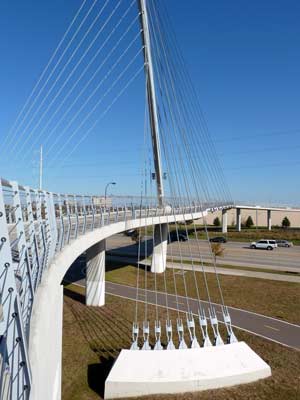 I hate to say it, but Kevin Krizek’s recent Streets.mn piece on the “Unintended Consequences of the Bicycle Facilities Arms Race” rubbed me the wrong way.

(Note: Before continuing here, you should go read it for yourself.)

Basically, Krizek uses the Midtown Greenway and Cedar Lake Trail extension to argue that high quality bike infrastructure can be counter-productive to attracting more bicyclists because it raises expectations to unsustainable levels. For example, Krizek argues that cities will begin competing to create fancy bike infrastructure,

[that] might require countless staff or lobbyist hours to procure funds [and] run the risk of reeking havoc on a healthy “arms race” that is occurring between cities.

The infamous Sabo Bridge is the posterchild of this kind of behavior, an expensive, earmarked, marginally-necessary bridge whose design is more aesthetic than practical. 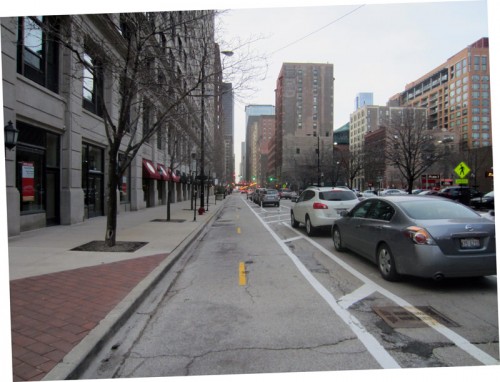 The Dearborn cycletrack in Chicago.

But I have two bones to pick with Krizek’s argument. First, the “arms race” metaphor isn’t just inelegant, it’s untrue. If there’s are US cities competing to create expensive bike  facilities, I haven’t seen them. Locally, Saint Paul is right across the river from Minneapolis, but Saint Paul bike advocates have to kick, scream, and hold their noses until they turn blue to get a 5′  bike lane installed. Duluth, Milwaukee, Boston, Los Angeles… they’re all similar stories. (Sure, New York and Chicago might have a few decent looking cycletracks, but their bike mode shares remain woefully low.) There might be a competition between mayors to make it seem like they care about bikes, but when it comes to actually building quality infrastructure, the exceptions prove the rule.

Krizek is also off base when he appears to blame bike advocates for an escalation of expensive projects. He writes that, instead of opting for low-cost/high-impact networks, cities seem to prefer a “single intersection treatment [that would] trump the Sabo bridge in its grandeur…” 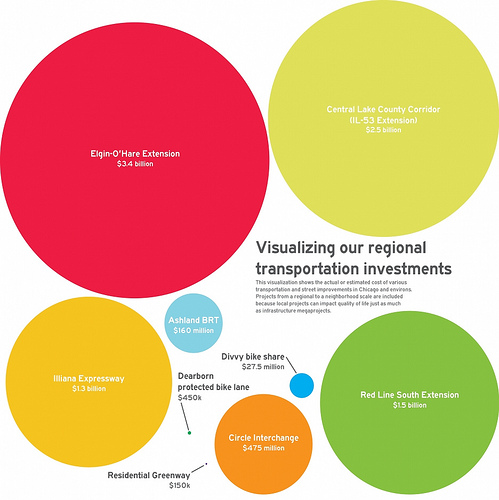 The relative costs of projects in Chicago; bikes = the tiny dot.

This doesn’t square. In my experience, Minneapolis bike advocates are very sensitive about costs for projects, and are careful to keep their proposals as close to the bottom line as possible. The Minneapolis Bicycle Coalition isn’t asking for large expensive projects. They’re waiting for the city to reconstruct a street, and pushing for changes at moments when they’ll be practically free. (The recent debates over cycle tracks on Washington and Minnehaha Avenues are good examples) This isn’t even to mention how affordable most bike infrastructure actually is when you compare it to the cost of, say, a traffic light, parking garage, or a re-constructed freeway interchange. 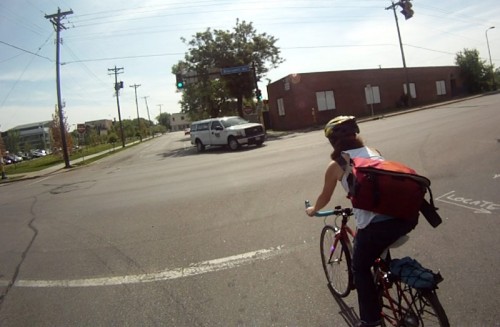 One participant tensed up in traffic.

My second beef with Krizek’s analysis is when he starts psycho-analyzising bicyclists, and implicitly blaming them for not riding in the proper way. Krizek writes:

Repeated studies suggest that cyclists obtain a degree of inattentiveness while traveling along off-street paths that stop them from paying attention to auto traffic that may be present at crossings.

In other words, Krizek argues that bicyclists shouldn’t become accustomed to comfortable, quality bike infrastructure because eventually they’ll have to brave the chaos of traffic. The greenway lulls people in to a false sense of security, from which they receive a rude awakening at the bumper of a car. 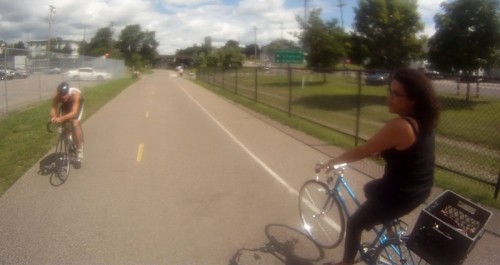 Another participant relaxing on the Greenway.

In my research, however, it is precisely these moments of relaxing and inattentive experiences that attract bicyclists in the first place. I conducted about twenty ride-along interviews with less-experienced riders, asking them about how they overcame some of the physical and psychological hurdles to become regular bicyclists. One of the common threads was the way that bicycling allows people to relax, space out, or enjoy the scenery.

For example, here is one person’s response when I asked him what he liked best about biking:

I think bikers have the best commute in the world. I think it’s an underrated thing. I like biking because it’s really the only time in the day where I can, like, zone out completely. I’m on the greenway, and I can zone out completely. And it’s just really nice to … it’s like a morning workout. I don’t know if you do that, but some people get really pumped for their day by working out in the morning. I’ve never understood that, but it’s sorta like that whole phenomenon it wakes me up and its great.

Many of the people I talked responded like this, saying that they held their noses and rode through traffic (even though they hated it) in order to get to the Greenway or river paths, where they could really relax and enjoy their rides.

Krizek’s analysis has a few good points, I respect his work on bicycling, and I’d bet we agree on 90% of the important points. But to me, he draws the wrong conclusion from a few over-priced projects. He concludes his piece by arguing:

Cities should leverage resources for bike only facilities—but in a cost-effective manner that does not obsess of their qualities and aim to seamlessly mesh with the larger on-street system of which they are a part.

In a way, I look at the same data and come to the opposite conclusion. Cities should pay close attention to the qualities of bike infrastructure, and try to go the extra mile by creating spaces that allow bicyclists to relax when they ride through the city. It doesn’t have to be absurdly expensive, and if my research is any guide, this will make all the difference.