The Yard is the name of the 3.4-acre open space proposed as part of the redevelopment of five blocks of Star Tribune land adjacent to the new Minnesota Vikings stadium in downtown Minneapolis. With all the attention being given to the stadium and secondarily to attracting Wells Fargo as a major office tenant in the project, it is easy to forget the park itself, by far the most important piece of this project. Let’s not lull ourselves in to thinking that a place called “The Yard” can be just a casual place to gather with grass and trees. It has to be much more than that. It is profoundly important that elected officials and business leaders in the city have the vision and use the right tools to make The Yard the gathering place for downtown Minneapolis every day of the year. 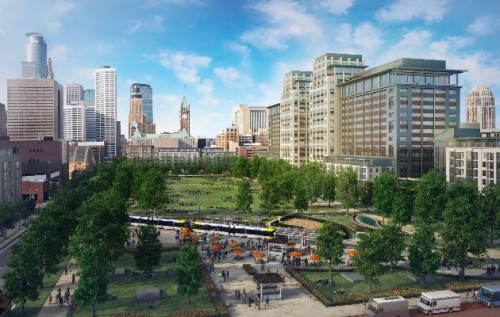 The second of two articles in Minnpost by Jay Walljasper frames what Max Musicant suggested in his Streets.mn post in November about the potential for The Yard and how we should measure its success. If, in five, ten years from now and beyond, The Yard is the automatic gathering place for public events and celebrations, then we can consider it a success. Walljasper points out that, after the Twins 1987 World Series victory, Minneapolitans and Minnesotans had no place to gather and celebrate (I remember thinking the same thing, which is why I didn’t leave the house). The Yard presents an opportunity to do this, but it will require more than that which is currently budgeted. Much more. In fact, the best landscape design won’t do the trick, either. What is necessary to make The Yard a great place is good management and programming to provide reasons to come out and play. A look around the country confirms this.

It is easy for Minnesotans to think of a park as a body of water and a trail, but a downtown park is different. When you look at the websites for Discovery Green in Houston and Fountain Square in Cincinnati, images you see aren’t grass and open space but people, events and fun! Park stuff like trees and benches are important, but downtown parks are built for gathering. Even Campus Martius in Detroit shows the way. All have something in common – attractions, programming and management. Events like festivals, markets, ice skating (even in Houston), fireworks, and performances all draw people. Yes, these parks are well designed, but programming is the key.

Now that the stadium is officially under construction and the Ryan Companies proposal could be soon, let’s take the proper time to envision what The Yard can be. This won’t be cheap, based on development costs and annual budgets for Discovery Green, Fountain Square, Campus Martius, Bryant Park in New York City and others. Development of a park could cost $5 to $10 million per acre, or somewhere north of $25 million. Chuck Lutz was quoted earlier in 2013 indicating it will be $10 to $15 million – this is likely low. Compared to the $65 million in bonding the city is using to pay for parking as part of the Downtown East development plan, and the $498 in public money being directed towards the Vikings stadium, it seems that finding another $25 million for a park that would truly benefit the public isn’t too much to ask.

Musicant notes in the comments of his post that, to be successful, The Yard must attract 1.7 million visitors per year, or 5,000 per day. Many of the other downtown parks I’ve mentioned above have between 1 and 2 million visitors per year, so this estimate seems sound. That is a lot of people and it will require much more than good design and eight football games to draw them.

Furthermore, the average budget for management and programming could well be between $2.5 and $5 million annually. This isn’t chump change, but can be covered in part by sponsorships and concessions. Other revenue should come from adjacent landowners and tenants that benefit most. Certainly the Minnesota Vikings and Wells Fargo stand to benefit more than the county morgue, and the Downtown Improvement District is the entity most able to collect any revenue in this manner.

It makes sense to treat The Yard as a somewhat separate matter in this overall process in order to take the time to get it right, and the city has created a Park Committee to help provide guidance. To be successful, this will require a very close collaboration between the new mayor Hodges, the Minneapolis Downtown Council, Minneapolis Park Board and certainly area landowners/tenants. A very well managed and programmed park will benefit all.

You may laugh at the notion about having a place to celebrate a Vikings Super Bowl victory. Lest we forget we have a champion, the Lynx, and as Jay Walljasper points out, the Twins won the World Series twice but we had and still have no place to celebrate. The larger point isn’t that we are hoping for a Super Bowl championship, although that would be wonderful. The real measure of our success is if downtown has a public space that is the natural gathering place in which to celebrate that victory. That will only happen if The Yard is a place to celebrate our city every day. That’s what’s on the line, and with The Yard we have a tremendous opportunity right in front of us to achieve this goal.