City Center: It’s a big complex. It sits on almost two whole blocks in Downtown Minneapolis between Hennepin and Nicollet Avenues, bounded by 6th and 7th Streets. Built in the early 1980s, it includes a hotel, an office tower, restaurants, retail, a parking garage, and skyway connections on every side. Emporis lists the tower as a modernist building, but you could certainly make a case to put the most of the complex in the brutalist camp with Riverside Plaza.

It has two skyscraper towers. There’s a 32 story triangular Marriott on 7th Street and a 52 story office building, largely full of Target employees, on 6th Street. The harshly dull office tower is the fourth tallest in the city, but it blends in with the skyline easily from just about every vantage point, save for the Skyline View seats at Target Field. If Minneapolis had gone through its late 80s/early 90s building boom a decade earlier, we’d have lots of SOM-ey boxes like this one–we’d look like Denver, basically.

The office component of City Center has done pretty well, and Target has a lease until the 2020s. The retail component, and by extension the streetscape around the building, has not done as well. City Center was one of many downtown malls that were built around the country as The Next Big Thing in the 1980s and 1990s. The neighboring Gaviidae Common and Block E complexes, which also sit largely empty, fit this mold. In the case of both City Center and Gaviidae Common, the retail spots along the well-trafficked second story skyway are generally leased, but other spots have issues. City Center, though, is a good case study in what you can do to improve these sorts of monolithic developments, because each of its four corners is very different. The two on Hennepin Avenue have ground level restaurants, one of which has outdoor seating (!), while the Nicollet Mall corners could use some work.

Aside from the bus stop, these photos are from a Saturday afternoon a couple weeks ago. It’s not clear from the photos, but there are a ton of people out walking around compared to your average Saturday afternoon in Downtown Minneapolis. Thought that was worth mentioning. 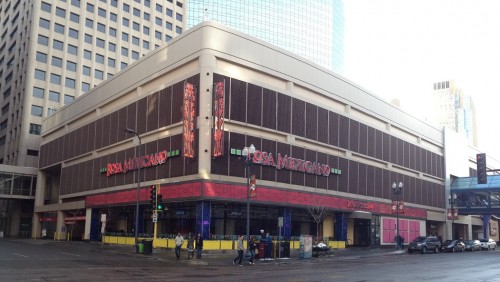 We’ll start off with the best corner of the complex. Rosa Mexicano has operated in this spot since 2011, following the closure of the T.G.I. Friday’s in 2005. They opened up the side of the building to provide outdoor seating, which is a nice touch. Without getting into a whole analysis of the downtown restaurant scene, it’s worth pointing out that Hennepin Avenue has been pretty brutal for restaurants in the past decade, though Rosa Mexicano is obviously a step above T.G.I. Friday’s and Olive Garden. It’s certainly much more pleasant to walk by than a blank wall, even if the outdoor seating is pretty sparsely occupied. 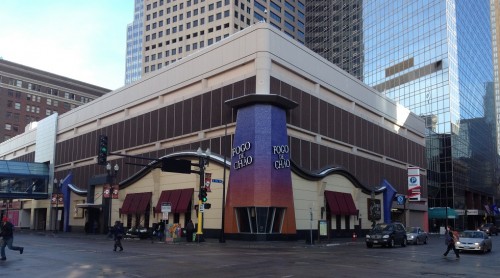 Next we’ve got the corner with Fogo de Chao, a Brazilian churrascaria. It opened in 2007. Purely from a streetscape perspective, it’s not as interesting as the Rosa Mexicano corner because of the lack of outdoor seating. But, given the way the restaurant operates (there’s a whole thing with guys running around with slabs of meat, slicing them on your plates) it makes sense that you’d want the whole operation indoors. This corner gets some points due to the tenant though–Fogo de Chao is absolutely the kind of place people will actually drive into the city from Eagan to go to. Many of these inner city complexes were initially built with that business model in mind, and almost none of that has panned out because there are very few tenants who can pull it off. 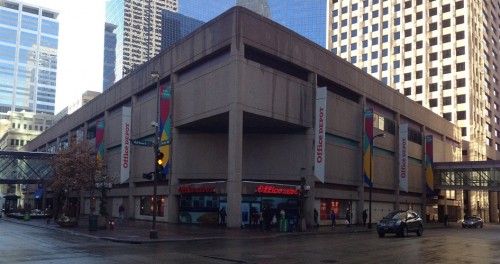 Next up, we have the Office Depot on Nicollet Mall. This one is a little perplexing. There’s a scene at the beginning of the movie Young Adult where Charlize Theron’s character walks in the skyway from her place in Churchill Apartments, over by the river, to this Office Depot without ever going outside. They make it easy! The exterior doors are bolted shut. Ostensibly, this is a security measure meant to funnel would-be shoplifters out one exit. It’s unclear what this particular Office Depot’s balance sheet looks like, but there were at least three (3) security guards (one per shopper) in the interior of the complex when I walked through that Saturday. You think they’d be able to work something out. On the bright side, even if that entrance is bolted shut, the corner of the building is kept open and the third floor hangs over it, creating at least a bit of shelter for the busy transit stop. 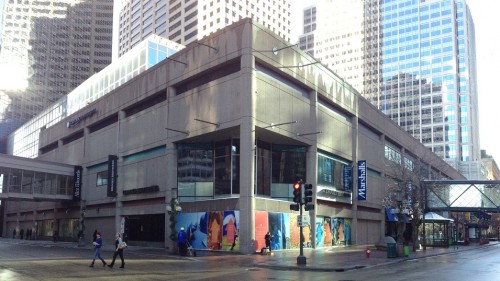 Fourth and last place is the corner of Nicollet Avenue and 7th Street. Rumor has it that there used to be a Sam Goody on this corner, but that closed in 2006. In its place are some large posters with various, increasingly dated Minneapolis-St. Paul promotional materials. The URL on the signage now leads to–no joke–a spammy website where you can buy “Willow Tree’s Faceless Figures.” You can see the size of the retail space if you go in the interior of the complex and squint into the windows–it’s a very large space. It’s hard to think of a large retailer who would want to be in this location, and if a large tenant is out of reach, you’d really need to figure out some way to subdivide the space.

The issues on this corner track closely with the issues with the overcrowded and at times unruly bus stop located on its door step. 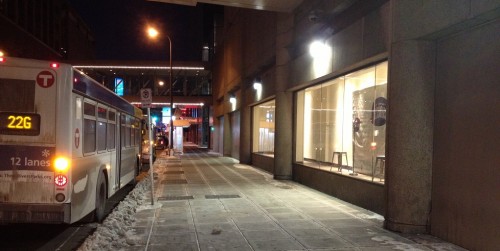 As Mike Hicks wrote in 2012, this is ridiculous. Over 4,000 daily boardings happen at this corner, and there’s a single, solitary standard bus shelter. By comparison, the METRO Red Line cost $115 million dollars and is projected to have 1,600 riders a day in 2017. The stop was updated late last year to…remove the bench, repave the sidewalk, and move the bus shelter down the block. A Metro Transit Police substation is forthcoming. The overall situation is a constant reminder of our region’s skewed transit priorities, but that story has been told enough times.

City Center does have some stuff going for it, however. The Marshall’s in the basement is almost always busy, and there’s actually a fairly inviting  space in the middle of the complex. While the architecture gives off a very 1980s sci fi dystopia vibe, it’s kind of cool to look at. 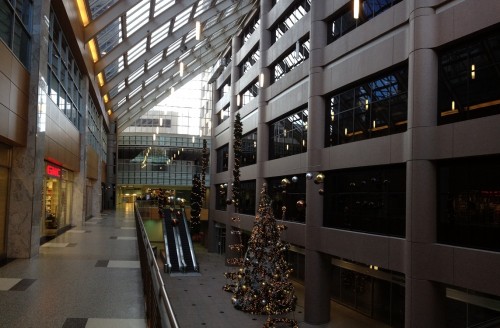 It’s also almost entirely empty. The GNC on the left and the Starbucks on the ground floor are really the only active retail uses here. Other than that there’s a staffing company, the physical outpost of an online college™, and New Century Theater on the ground floor. It’s hard to imagine what small- or medium-sized retail could work in these spots, given the demand and foot traffic today.

Given where Downtown Minneapolis is headed, however, we’ll probably see some of this space get filled in the future. A rapidly rising residential population with lots of disposable income will change the dynamic for City Center and other half-empty buildings downtown. There have been rumors of an update to the exterior, which is much needed. Obvious recommendations for this update:

Gaviidae Common is already a pretty attractive space, and while the jury’s still out on Block E’s proposed new design, it’ll certainly get a lot of attention when remodeled. For a complex like City Center to keep up, it needs to leave the 1980s and find its way into the 21st century. Most of City Center’s new customers aren’t going to be driving in from saturated retail markets in the suburbs, they’re going to be walking down the street from their condos and apartments and taking transit from elsewhere in the city. The bottom line is that is a place that looks like it’s for people will invariably attract more people than a place that looks like it wants to keep people out.

9 thoughts on “The Four Corners of City Center”