“She said City Center used to be the center of our scene. Now City Center’s over.” – The Hold Steady, Your Little Hoodrat Friend

Could City Center have turned out differently? The answer is absolutely it could have. Reading Nick Magrino’s post on the four corners of City Center in Minneapolis, I recalled there is a nearly identical office tower in Denver. It is called Republic Plaza. It is also designed by Skidmore Owings & Merrill, and it opened two years after (1984) City Center in Minneapolis (1982). It appears both projects were developed by Brookfield Properties. (Incidentally, both also have a Starbucks as part of their current unit mix.) That is where the similarities end. Based on a quick Street View tour of Republic Plaza (and caffeinated recollections of grabbing a coffee at both Starbucks), and comparing it to the four corners of City Center post, the design of the two projects at street level and how they relate to the public realm are night and day. And (sigh) it seems Minneapolis really got the shaft.

Allow me to demonstrate. As you can see, the two towers are hard to discern.

City Center (the office tower is called 33 South Sixth, and the complex is now owned by Shorenstein Properties) is above, and Republic Plaza is below. 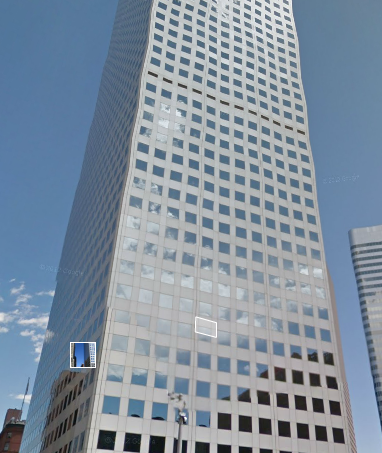 It is almost comical how similar the towers are. Skidmore, Owings & Merrill (SOM) were not the only architecture firm designing office towers that were decidedly of an era, but it would be easy to imagine they presented plans for an office tower in Minneapolis, rolled those plans up, hopped on a plane to Denver and made the same presentation. Coming down to street level, you can see they did not. 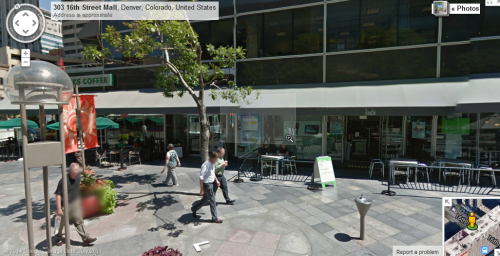 The 16th Street Mall has been the primary pedestrian avenue in downtown Denver since 1982. As you can see from the image above, the retail frontage of Republic Plaza is very well done, with plenty of windows, doors and outdoor seating to blend well with the pedestrian amenities of the mall itself. It is obvious that the powers that be in Denver placed a high priority on this relationship, and demanded good urbanism from SOM. Compare that to Minneapolis, where City Center faces the primary shopping street (Nicollet Mall, built in 1968) without a single ground level tenant having access to the street. So, even with an established and expensive pedestrian mall, Minneapolis allowed a development that largely turns its back on it. 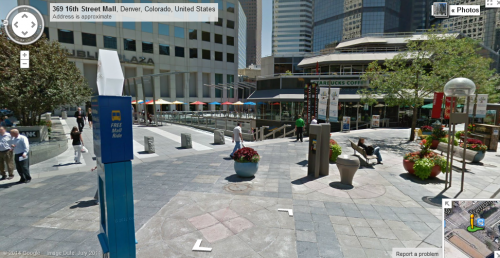 The above image of Republic Plaza is taken from the corner of 16th Street and Tremont Place – for the sake of comparison, the equivalent of Nicollet and 7th in Minneapolis. As you can see, there is a large outdoor plaza, that, while I suspect is private property, the line between that and public is hard to discern. There are places to sit, shade trees, tables with umbrellas, greenery and the Starbucks is in a prominent, sensible location. Compare that to Minneapolis, where there is one (ONE!) place to sit and the only entrance in sight is access to a basement store. As in Minneapolis, there is a highly used bus stop, but in Denver it is for the Mall Shuttle, a much-loved service, as opposed to the shunned bus stop in Minneapolis. 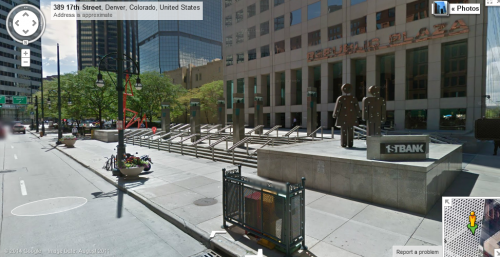 At the corner of 17th Street and Tremont Place we see a fairly pleasant primary entrance to the office tower, complete with some public art and an adjacent shaded mini-park with places to sit. While the entrance to 33 South Sixth in Minneapolis faces 6th Street, it pales in comparison to Republic Plaza. However, this corner is roughly analogous to the two corners of City Center that face Hennepin and have restaurants. Still, Republic Plaza presents itself better and more effortlessly, whereas it took City Center 30 years to land a restaurant (Rosa Mexicano) that had a halfway decent relationship to the street. 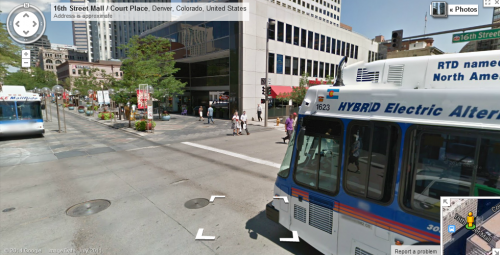 The corner of the 16th Street Mall and Court Place reveals an attractive streetscape and equally attractive retail frontage. Compare this to the Office Depot at 6th and Nicollet in Minneapolis, whose street entrance is permanently closed and the store is only accessible by the interior of the “mall” (the interior shopping kind, not to be confused with the pedestrian shopping street also called a “mall”). Again, in Denver the uses lining 16th Street are seamless with the pedestrian character of the sidewalk and street.

Even the building’s worst side, the parking entrance along Court Street, looks good, as it has retail frontage. That pedestrian walking past the garage entrance is only temporarily in a no-man’s land between more pleasant retail frontages.

So what the hell happened? Don’t blame SOM. Yes, they designed a tower in both cities that at best fades in to the skyline behind better looking buildings. But this doesn’t matter to the pedestrian. Someone walking by Republic Plaza on nearly all sides has a pleasant experience. At worst they pass one garage entrance or have to look through a long wall of windows. In other words, the worst corner of Republic Plaza is better by far than the best corners of City Center. My conclusion is SOM designed a very good building at the street level in Denver because they were asked to.

I suspect some of the blame could be an attempt at competing with suburban shopping centers. The goal of City Center was to be an enclosed shopping center anchored by Donaldson’s. For a variety of reasons, that did not work out over time, neither financially nor as good urban design. Republic Plaza never tried to be much of a shopping destination, and its small amount of retail fronting 16th Street works much better and can withstand tenant turnover much better. Most cities, including Denver, have had mixed results when trying to maintain downtown retail against suburban competition, and Minneapolis has a long line of failed downtown retail/entertainment experiments. Republic Plaza is not an example of this.

Maybe Minneapolis spent all its good urban design capital on the lovely IDS and Crystal Court project in the 1970s. Certainly the skyways suck life up off the street level at City Center. Although even Crystal Court manages the integration of skyways pretty well, one has to argue without skyways there would be more retail doors at the street level. (By the way, I’ve met the man who helped prevent the scourge of skyways from sucking the life off of the streets of downtown Denver. His name is Richard Fleming, and he says they would have blocked the view of the Rocky Mountains. Well done, Richard!) You can’t blame social ills, either – both Denver and Minneapolis have a homeless problem to wrestle with and also issues surrounding petty and violent crime.

Architects and developers are only as good as their clients. If this tale of Republic Plaza in Denver has taught us anything, before we spend a dime on rebuilding the public realm of Nicollet Mall, we need to first ask if we can repair the urbanism that faces it. There is hope for City Center, and if there is any chance to work with Shorenstein to open up the frontages along Nicollet (and Hennepin), we need to do so. Ideally this would include a line of several vibrant street level businesses, but could also include temporary tenants, art installations or even just some display windows to give pedestrians something to look at. Until then, we can only blame ourselves for failed downtown urbanism.

11 thoughts on “What if City Center Looked Like This?”