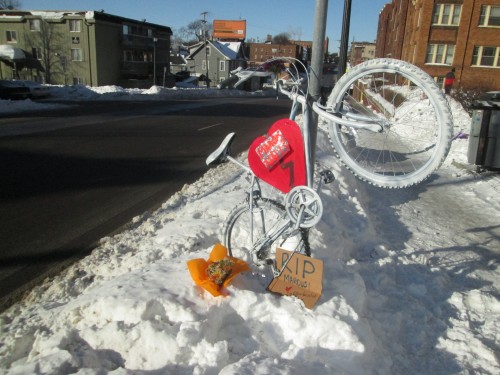 Last night, I quickly blogged about media coverage regarding the death of Marcus Nalls, hit and killed on his bicycle by a drunk driver. John Iverson killed Nalls on Franklin Ave.–one of the busiest and most dangerous roads that bicyclists utilize in the Cities. Although my argument remains the same today, I want to take a bit more time here to talk about how news media frames bicycle-related deaths.

Compared to other news stories about bicyclists’ deaths, the news coverage about Nalls stands out because journalists are making it abundantly clear that he was a safe bicyclist. We need to ask why this framework is necessary. At its most basic, framing the story as “safe bicyclist still dies” rather than “drunk driver kills bicyclist” continues to highlight the necessity for bicyclists to prove that they do not deserve their injuries or death.

Another: Bicyclist fatally run over was new to Minneapolis, careful about bike safety

From this Star Tribune article, Paul Walsh reports Nalls was “an experienced bicyclist” and “despite…using the proper safety equipment…[he] was run over.”

And you do not have to take the journalist’s word. A police spokesman confirmed that Nalls “was wearing a helmet. He had an illuminated front lamp and a rear lamp. This was a bicyclist who was doing what he was supposed to be doing.”

These headlines diverge immensely from the typical framework journalists use to discuss the deaths of bicyclists.

The lawless cyclist and victimized driver

In his research about news media framing of bicycle-vehicle crashes, bicycle scholar Zack Furness (2010) highlights examples of the “car driver as victim” framework. This framework shows how “demonizing cyclists” threaten drivers’ “safety, freedom, mobility, and the general way of life” (p. 129). This framework is especially prevalent during winter biking months. Here in Minnesota drivers often express to bicyclists that they are endangering themselves because drivers could easily hit them. A police officer told my friend, who was rear-ended by a driver, that she is putting herself at risk by bicycling in the winter. The logical conclusion is that drivers will then be victims of hurting bicyclists. This may be one of the most common yet illogical forms of reverse victim blaming.

The “aggressive, lawless cyclist” framework is also part of the victimized driver rhetoric. Normalizing the rhetoric of the careless bicyclist is problematic because as Furness (2010) argues, “drivers often attribute fault and/or blame to cyclists in situations where they are either doing nothing wrong or acting in accordance with other road users” (p. 131). ­

So in some ways, the news media immediately stopped the “lawless cyclist” rhetoric from being hurled at Nalls. And it saved bicycle advocates the immense headache of both grieving a death and defending our rights to the road. But, to back up a bit, we should never have to deflect false blame from drivers; blame that is rooted in nothing but visual interpretation of the bicyclist. Drivers’ critique of bicyclists’ behavior tends to have “little to do with the actual circumstances of a given traffic situation, seeing as how drivers partly interpret cyclists’ level of skill and safety based on a visual assessment of their outfits.”  (Furness, 2010, p. 131)

Over the last day, some people have commented that they do not see the harm in journalists conveying the fact that Nalls was following the rules of the road and wearing protective equipment. Because Nalls is framed as a “safe” bicyclist then the injustice of his death was underlined and the driver’s blatant irresponsibility is thus undeniable. I agree. It appears that Nalls did nothing “wrong” within the mobility practices that killed him.

But, the problem with seeing this framework as laudable then reaffirms that bicyclists who are not “safe” or “careful about bike safety” are somehow responsible for their own death. Bicyclists cringe when journalists report that dead bicyclists were not wearing a helmet or lights. We get into our defensive stance, ready to fight people who dare to say that when drivers hit a helmet-less bicyclist with their cars the bicyclist is to blame. But if the bicyclist wears a helmet, they are “careful” and “safe” and therefore not responsible for their death. There is something troubling about basing the responsibility of death on the bicyclist and their safety accessories.

Another person commented on my blog post that because drivers do not like bicyclists we have to do everything possible to protect ourselves. That way, in the case a driver kills us we do not have to be worried about being blamed—all blame goes to the driver. Lest we forget that we are waging a 30 lbs vs. 4,000 lbs battle. Moreover, drivers routinely break traffic laws without pause but when a bicyclist dares to coast through a stop sign “it is construed as nothing less than the deterioration of the rule of law and the social contract of democracy.” (Furness, 2010, p. 132).

None of this actually matters

But let us not forget that a helmet and lights will not save you when a van comes barreling at you from behind without warning. A bicycle lane, something bicycle advocates have been begging for on Franklin Ave., will not save you. No amount of bicycle infrastructure and blinding, blinking lights would have kept John Iverson from killing Marcus Nalls. But again, it doesn’t matter. I do not care if you are a 10-year veteran of bicycle commuting or a sidewalk-riding novice out to get some smokes from the corner store. All bicycle-related deaths are equal. They are awful.

For those interested in justice for Nalls, John Iverson has now been released without charges pending toxicology reports.

Melody Lynn Hoffmann is a transportation equity advocate and professor of Communication Studies. Her dissertation looks at how racism and gentrification is embedded in mainstream bicycle advocacy. You can find more of her work here.