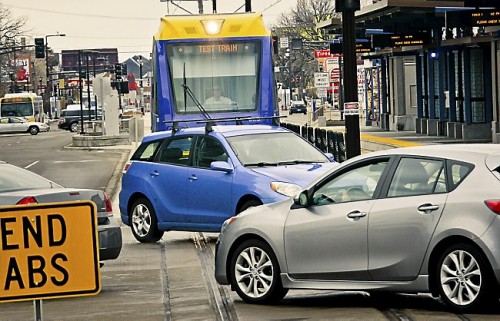 Signal timing makes a huge difference. As the Green Line planners are just discovering in Saint Paul, how we prioritize different modes at intersections can make the trip between downtowns last over an hour, or we can cut that time in half by prioritizing trains at busy corners. It’s a matter of priorities.

Similar problems arise with pedestrian crossings. Here are some questions for you: How long should walkers have to wait at a light to cross the street? How many seconds should the walk phase be? Should you have to press a button? Should pedestrians get a head start (a.k.a. “leading pedestrian interval)?

In a way, how we answer these questions sends social signals about our priorities. Minneapolis, Saint Paul and most suburbs all list laudable goals in their city plans, where they officially prioritize transit, walking, and biking. Meanwhile, our traffic signals and street designs are dominated by the needs of turning and speeding car traffic. We’re sending mixed signals.

It doesn’t have to be that way. Just as we can speed up the train, we can make it easy for people to walk around our cities. The trick is knowing the difference between accommodating and prioritizing people on foot. That means shifting our priorities at signals, and in street design. 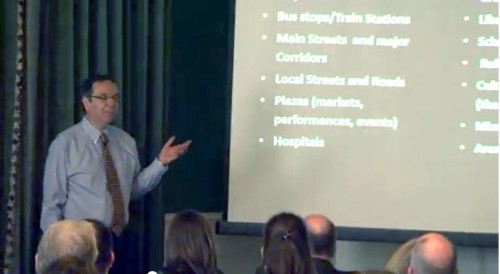 One key problem is that our streets seem designed only for the young and healthy. Last week, noted urban designer Gil Peñalosa was in town as part of the Saint Paul Riverfront Corporation’s placemaking residency. He’s the thinker behind the Cyclovia and BRT reforms in Bogota, Colombia, and has since become an urban design consultant based out of Toronto. His key concept is that we should design city streets so that young people and the elderly can walk around; he calls it the “8-to-80” cities movement.

The best speech I saw him give was at the Saint Paul Transportation Summit, co-sponsored by Saint Paul Smart Trips and the Chamber of Commerce. As he described it:

It’s about creating cities for all… What is 8 and 80 cities? It’s not just about walking and cycling. These are the means not the ends. The end is how we can contribute to building vibrant cities with healthy communities where the citizens are going to be happier enjoying parks and public places.

You don’t have to be a transportation engineer.Three simple steps.

Step #1 think of a child about 8 years old that you love, your daughter or sister or grandchild. Once you have this boy or girl in mind, then go to step #2. Think about an older adult that you also love, and when you have the child and the older adult in mind, go to step #3. Would you send this child and the older adult across that intersection? Would you send them walking or cycling to the store or to the school or to take public transit? …

What if everything that we did in the Twin Cities had to be fantastic for the 8 and for the 80?

Peñalosa’s argues that cities should prioritize walking, biking and transit over cars. When designing a street, we need to think about children and older people. If we have crosswalks timed so that only athletic people can make it across the eight lanes of traffic, old people won’t keep walking, and our kids won’t play outside. Is that what we want?

Example of how NOT to prioritize walking

Let’s return to our questions. How long should walkers have to wait at a light to cross the street? How many seconds should the walk phase be? Should you have to press a button? Should pedestrians get a head start?

Once you keep Peñalosa’s rules in mind, the answers are pretty simple. Traffic signals in walkable areas should have short phases. If you’re walking through downtown Saint Paul or Minneapolis, there’s no bigger annoyance than having to wait at a stoplight while cars speed around corners. Decreasing the phase length prioritizes people on foot, reduces jaywalking, and allows people to safely get where they’re going. No turn on red rules are another.

Second, walk phases should be longer to allow slower moving people the time to be safe crossing the street. Older folks should be able to walk around our cities, too. And no, they shouldn’t have to press a button just to cross the street, particularly in a walkable area.

Finally, a few second head start for people on foot is an easy change that signals that pedestrians are the most vulnerable users of the street and should come first. This should be true, literally and figuratively.

These changes are easy, but the difference is huge. All we need is a shift in mindset, and a greater willingness to prioritize between users. A beg button accommodates pedestrians, but an LPI, quick phases, and a longer crosswalk timing reflect actual priorities. It’s easy to talk about how we want our streets to be walkable and vibrant. It’s time we actually walked the walk, too.