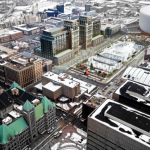 You may have seen the artist renderings.  The drawings lay out a vision for The Yard, the planned four-acre urban park adjacent to the mammoth new Vikings Stadium.  In the winter versions, the park is shown populated by happy, hearty Minnesota families  skating, admiring ice sculptures, making snow angels and generally laughing in the face of Old Man Winter. When I look at that rendering, I can clearly hear the soundtrack:

“When it snows,
ain’t it thrilling?
Though your nose
gets a chilling.
We’ll frolic and play
the Eskimo way.
Walking in a winter wonderland.”

That, my friends, is us.  Minneapolis has the best park system in the nation, because Minneapolitans loves them some outdoor activities, in all seasons.  That’s why this little outdoor space has emerged as one of the more intriguing, unifying and endearing elements of the Minneapolis stadium area vision.   It is a quintessential Minnesota kind of space being built on Minnesota’s most visible stage.

But the corporate types dreaming up the Super Bowl bid don’t see it that way.  They  promised the NFL muckety-mucks that they would replace The Yard with, well, The Pole Barn.

Well, technically, I guess it’s going to be a tent, but in the artist’s renderings, the ginormous grad party tent looks more like a poultry pole barn to me.  To be fair, it does have a very snazzy Super Bowl LII logo on the roof, making it one of the more swank pole barns I’ve ever seen.

I understand what the Vikings owner Zygi Wilf and his merry band of corporate boosters are shooting for with this idea.  They wanted to reassure delicate NFL billionaire owners who have heard nasty rumors about Minnesota weather that we are in possession of heat, and are prepared to pipe it in wherever the partying swells desire it.

After all, we are who we are, and we should be proud of who we are.  We want to show the world that Minnesotans don’t just survive winter weather; we find ways to have fun in winter weather.  Showing everyone skulking into an ugly heated tent paints quite the opposite picture.

But don’t, repeat don’t heat, sterilize and corporatize the outdoor space that we are building to frolick and play the Eskimo way on the national stage.  Super Bowl week or not, let’s let Minneapolis be Minneapolis.

14 thoughts on “Super Bowl Bid Bust: Why Are We Destroying The Yard With The Pole Building?”