You may have heard the news about a little apartment building proposed for a site at 24th & Colfax in the Wedge. After a long, bitter battle over whether the houses currently on the site should be demolished, the proposed building is finally up for review before the City Planning Commission. One of many reasons why this building is interesting is that fewer parking spaces are being proposed than dwelling units. Is the developer crazy? Maybe, but at the same time the building will be within easy walking distance of six bus routes that will give residents a one seat ride anywhere from Minnetonka to the U of MN or from New Brighton to Bloomington.

If you ride transit, you understand how rare it is in the Twin Cities for a location to have this great of transit accessibility. A few years back, a minor edit was made to the Minneapolis Zoning Code to recognize the commensurate reduction in auto use and non-use (i.e. parking) in transit accessible locations, for which the excellent title of ‘Transit incentives’ was developed and applied. This edit doesn’t apply to the site at 24th & Colfax. You see, the site at 24th & Colfax, which anyone who rides transit can see is a great spot for riding transit, is 350′ from the closest transit stop. The Transit Incentives program only applies to sites that are within 300′ feet of a transit stop. Meanwhile, Metro Transit recommends stops be placed between 660′ & 880′ away from one another.

All these numbers are dreadfully confusing, so I came up with a 3D charent* to illustrate them: 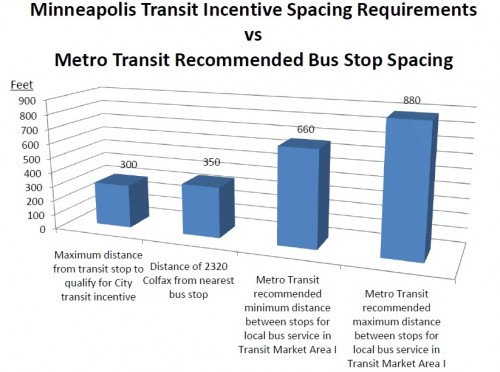 So to sum this up, the city considers transit’s influence on land use to be nil as soon as you step over 300′ away from a stop. Meanwhile Metro Transit (the transit experts, you’d think) feel that if stops are every 660-880′ an area is sufficiently covered for transit purposes. This leaves us a hole in the doughnut (hmm maybe I should have made a doughnut chart) of roughly 30-140′ where there could be a land use satisfactorily sheltering or employing transit riders that doesn’t qualify for the Transit Incentives. Now how do you suppose that came to be? What do you think could be done about it?

*Charent is a word I made up to describe charts that have no real reason for existing in that they don’t really visually articulate numerical concepts. Basically, if a chart is 3D, you can assume it doesn’t need to exist.

12 thoughts on “Chart of the Day: Doing the Math on Transit Incentives”