Note: I quite dislike conspiracy theories. I don’t know how many of the numerous theories put forth turn out to be true but it seems like most have no real foundation and thus cause considerable harm for no reason. On the other hand I do think that given enough evidence it is important to at least take a look. I really really hope that the potential conspiracy outlined below is false, but I also think it’s important to get it out there.

I recently wrote about what a great opportunity I think that 3M has with their Maplewood campus and nearby neighborhoods, including bikeshare possibilities.

A couple of weeks later I was made aware that GM are implementing a bikeshare system on their campus in Michigan. This sounded really great, especially for a car company to be acknowledging that bicycles are such a valid transportation option.

Could it be that simple?

The ad that GM ran in most every college newspaper in the country a couple of years ago might complicate things a bit. 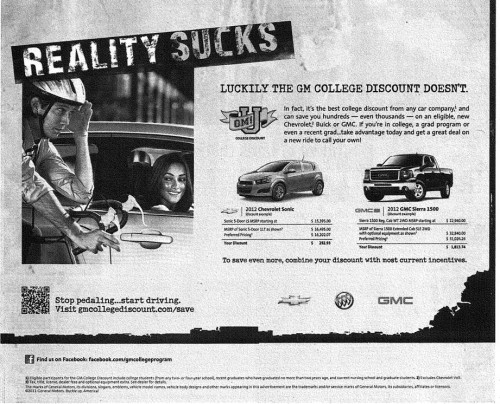 Is this a company who thinks bicycles are a valid mode of transportation?

Within minutes of publication there was a twitter storm resulting in amazingly quick apologies from GM. I’d guess that they knew this would happen and saw no major negatives. They got their point across (bicycle riders suck, GM cars rule), the people that they wanted to reach would likely not have even noticed the twitter storm and subsequent apologies anyway, and either way they would have garnered a lot of PR.

Perhaps GM had a change of heart after that ad and their bikeshare system is a genuine result of that?

Or not? As a part of their system GM will require all bikeshare users to always wear helmets. Ah, now we’re talking good stuff. Conspiracy and controversy.

Some have argued that this is a requirement of GM’s insurance company. There are two problems here. First, they are likely self-insured[1]. Second and perhaps more important, the company running the system for them says on their website that helmets are not required.

Just concerned for their employees? There has been no indication that bikeshare is exceptionally dangerous. In it’s first year of operation, NYC’s Citibike program recorded no fatalities and few injuries. And this was in New York traffic! Other studies have indicated that cities with bikeshare systems have seen an overall decline in injuries, including head injuries, of bicycle riders.

There is also the issue that only two of over 600 bikeshare systems worldwide require helmets (others did but dropped the requirement due to user complaints and low use).

On top of this, there is nothing that I’m aware of indicating that bicycle helmets reduce head injuries. Most significant is that countries with high helmet use have about the same or higher rate of head injuries per overall bicycle injuries as helmetless countries like The Netherlands.

Why then would GM include this requirement?

A conspiracist might say that they want their bikeshare system to fail. They’ll get all kinds of great PR for implementing such a healthy and green initiative. And then they’ll be able to show how ineffective bikeshare is. I can hear the quotes from GM now “We tried very hard but people just don’t want to ride bicycles.”

The word will go out that corporate campus bikeshare systems like this will be failures because “people just don’t want to ride bicycles”. In other words, people prefer campus commuter vans and cars. Ideally GM branded (but any motor vehicle is better than the threat to sales of people realizing that bicycles are a good alternative).

Corporate types might look at this and not want to risk a similar failure. People in corporations are understandably like that. Most really dislike doing anything risky that could in any way reflect poorly on their job performance. Something that has failed at GM then carries the appearance of considerable risk. It’s tough to go against the grain. And GM will have set that grain.

Certainly no company would actually do this? Sabotage their own program? Well at least no major upstanding company like GM?

Most recently we can look to GM’s ignition switch scandal[2]. Before that GM was blamed for the deaths of over 2,000 people in what became known as the saddlebag fuel tank cover-up. The EV1 conspiracy discussed in the 2006 documentary “Who Killed The Electric Car” is at the least a bit interesting.

Perhaps most interesting though is the GM Streetcar Conspiracy[3].

Did GM (and Firestone Tire and Standard Oil) really buy up electric streetcar systems across the nation only to convert them all to buses? Just to sell more motors, tires, and petroleum?

Buses were, by most accounts, much more expensive to operate, especially as a replacement for existing streetcars. They required more maintenance than streetcars, didn’t last as long, fuel was possibly more expensive, tires had to be replaced. They also likely caused more wear and tear expense on streets—street rail networks were already in place and largely a sunk cost except for routine maintenance and were better able to bear the weight of heavy mass transit than even todays best pavement technologies.

Nah, they’d never do anything like that. These were all private companies. Why do something that would be so much less profitable? Well, just get the government to help pay for it, yeah, that’s it [4].

Did GM really sabotage their own streetcar companies?

Would GM really sabotage their own bikeshare system?

Bikeshare has been wildly popular and I think it’s safe to say that is true of every city and corporate campus where it’s been implemented—except two. Of approximately 500 bikeshare systems, Melbourne is the lowest performing and Brisbane is close behind. These two are also the only ones I’m aware of that currently require users to wear helmets.

Fortunately I think we’re somewhat safe in MN. Target is already a leader in promoting bicycling with more plans in the works. I doubt that 3M will, in this case anyway, give much credence to GM if GM fails. For starters, a quick check of the National Bike Challenge shows a number of 3M executives participating, including CEO Inge Thulin, and most with significant mileage. Of 24 GM Executives: zero.

Mayo Clinics? According to Google they don’t want bicycles chained to to things.

I hope that GM’s bikeshare is a huge success and that in hindsight this post can be properly viewed as tongue-in-cheek rather than anything serious. If it is anything less than wildly popular I think we’ll have our answer.

[1] Most large companies are self insured. The purpose of insurance is to spread risk among a relatively large population. Larger companies receive no benefit from this since they are themselves a large population and usually find no benefits in an further risk sharing and thus no need to bear the additional costs. This also allows them to set their own rules and better control their costs/benefits from various risk scenarios.

[2] Questionable ethics in the auto industry isn’t limited to GM. Ford have had their fair share such as the recent F-150 parking brake scandal. Somewhat more entertaining is the intermittent windshield wiper scandal that was shared by Ford, GM, and Chrysler with Ford and Greg Kinnear in the leading roles.

[3] This scandal has some MN connections: http://www.intransitionmag.org/archive_stories/streetcar_scandal.aspx

[4] Some of the streetcar companies were indeed struggling and near bankruptcy so an argument could be made that they were not financially viable anyway. However, along with converting electric rail systems to buses the GM/FIrestone/Standard group went to governments for subsidies. While the streetcar systems were either fully supported by fares or close to it, today only about 1/3 of the costs of Twin Cities Metro Transit bus services are funded by fares with about 2/3 paid for by taxpayers.