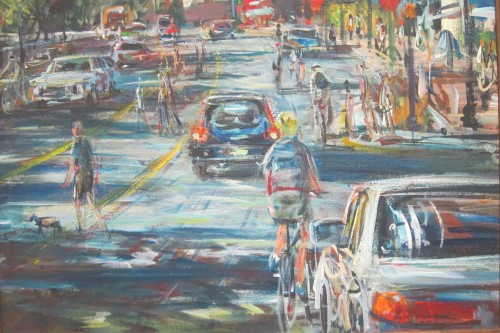 In 2012, Hennepin County and the City of Minneapolis re-striped Park and Portland Avenues, thereby reducing automobile capacity on two thirds of the corridor (from three lanes to two). These stretches were considered to be at ‘overcapacity,’ making them low hanging fruit for repurposing.

But complimented with stretches of Lyndale Avenue South and other areas around town, the decision to cut back on auto capacity was one of semi-historic proportions. It helped signal a threshold that was broken through in the spectrum of where, how, and why to repurpose streets. It helped set the stage for the future Washington Avenue repurpose downtown, where traffic lanes will be reduced to add bicycle lanes.

Transport systems in communities worldwide slowly evolve. The next evolution will likely respond to technological innovations (e.g., driverless cars) and environmental or other pressures (e.g., cars, in their current form, are largely demonized). Critical questions moving forward revolve around what areas of what streets should serve what purpose. Areas in the right-of-way, most of which are currently devoted to moving cars, will likely be repurposed (not all, but some, if not most). This means changing the proportions and purpose for how this space is used, broadly speaking.

Repurposing can take many forms. It can mean taking away a shoulder and installing a bus rapid transit system. It can mean replacing a vacant 12 foot median with a light rail route. But these are examples with excess space that might be empty in the right of way. What happens when all space in the right-of-way is spoken for? What happens when people say all of that is needed for cars? In these cases space needs to come at the expense of automobile capacity; in most communities, this proves a difficult sell.

Places across the globe are at different points on the spectrum for accepting repurposing arguments. Narrowing the discussion to just the role of automobility and streets, what does this spectrum look like? Where is your community? I offer five tiers.

Simply applying this spectrum to capture broad-based transport and corridor discussions is too crude. There is inevitably variation in the needs across an entire jurisdiction. An isolated traffic calming treatment does not catapult a community forward.

Some communities have swallowed the “auto-repurposing pill” more quickly and swiftly than others. Several indications suggest that Minneapolis might be ahead of the curve in this respect. Because of such, it helps lays the foundation for future conversations to be more progressive. There is precedent to which one can turn.

Changing the purpose of auto lanes which have largely existed in their current form for over a half-century is difficult but likely inevitable. The sooner such conversations start to happen in communities, the more nimble they will be when more monumental transport changes start coming.