A debate exists online and perhaps in real life over whether or not we ought to close Portland Avenue through the new, not-yet built or even designed or paid for Downtown East Commons in Minneapolis. Many smart people do not want to close Portland Avenue. Others think closing Portland Avenue would be just fine. A streets.mn post about a month and a half ago suggested that, “Hey, maybe we could just close it for a few weeks and see how it plays out?” Here are some more detailed thoughts about that whole situation.

Portland Avenue, a southbound one-way road paired with northbound Park Avenue, is a county road that travels from Washington Avenue on the east side of Downtown Minneapolis straight through Minneapolis down to this nice neighborhood in Bloomington near the Minnesota River. As part of Vikings stadium/Downtown East redevelopment deal-sealing, Ryan Companies is going to sell approximately 1.7 blocks of land to someone (this is still being sorted out) to operate a park, which has been dubbed “Downtown East Commons,” a better name than “The Yard.” Highfalutin’ renderings were released at that time; an updated version of those renderings with the current proposed layout is shown below. At this time, this should be the only rendering used. 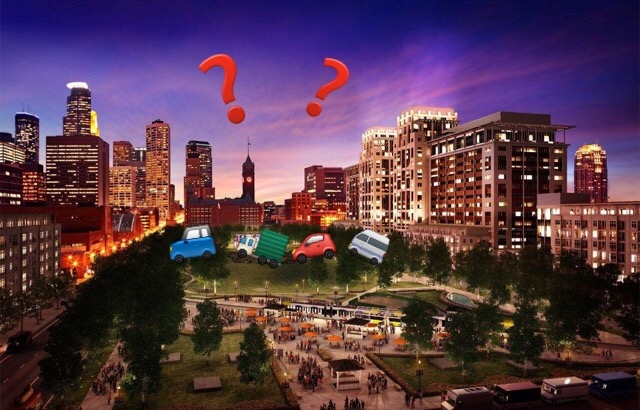 Immediately after the park was announced, Hennepin County said that they were not going to close Portland Avenue, and the developer and others backed down pretty quickly. We are now some tens or hundreds of thousands of dollars into planning a park with Portland Avenue in the middle of it. Could that work? Maybe! Anything is possible. Another possibility is that we could jump at this once-in-a-generation opportunity to add some top-notch green space to our thoroughly under-park-ed downtown and close Portland Avenue for one of its many blocks.

There is, of course, a very good, very general argument in favor of the grid, and keeping the grid, and not breaking up the grid–there are parts of the city where we did break up the grid, and it was a bad idea. Though, when we’re thinking about areas where our grid is broken, the first example that comes to mind is probably Lake and Nicollet, and I mean, why was that closure a bad idea? Why do people talk about it with such disdain in 2015?

People don’t like it because there’s a one-story big box K-Mart with 100 acres of surface parking there. The disdain has little to do with the street closure itself. If anything, closing the street has probably had positive effects on Nicollet Avenue as a street. You know what’s a nice street to walk and bike on and sit out at a sidewalk cafe and have a conversation while eating a sandwich? Nicollet Avenue between Franklin and the Midtown Greenway. A few blocks over, Lyndale Avenue is none of those things. This logic is not extendable out into infinity–closing all streets everywhere is a bad idea–but there are examples in this city and others where moving car traffic around did not end the world.

And, hey, many parks around the city interrupt the grid, and it is fine. 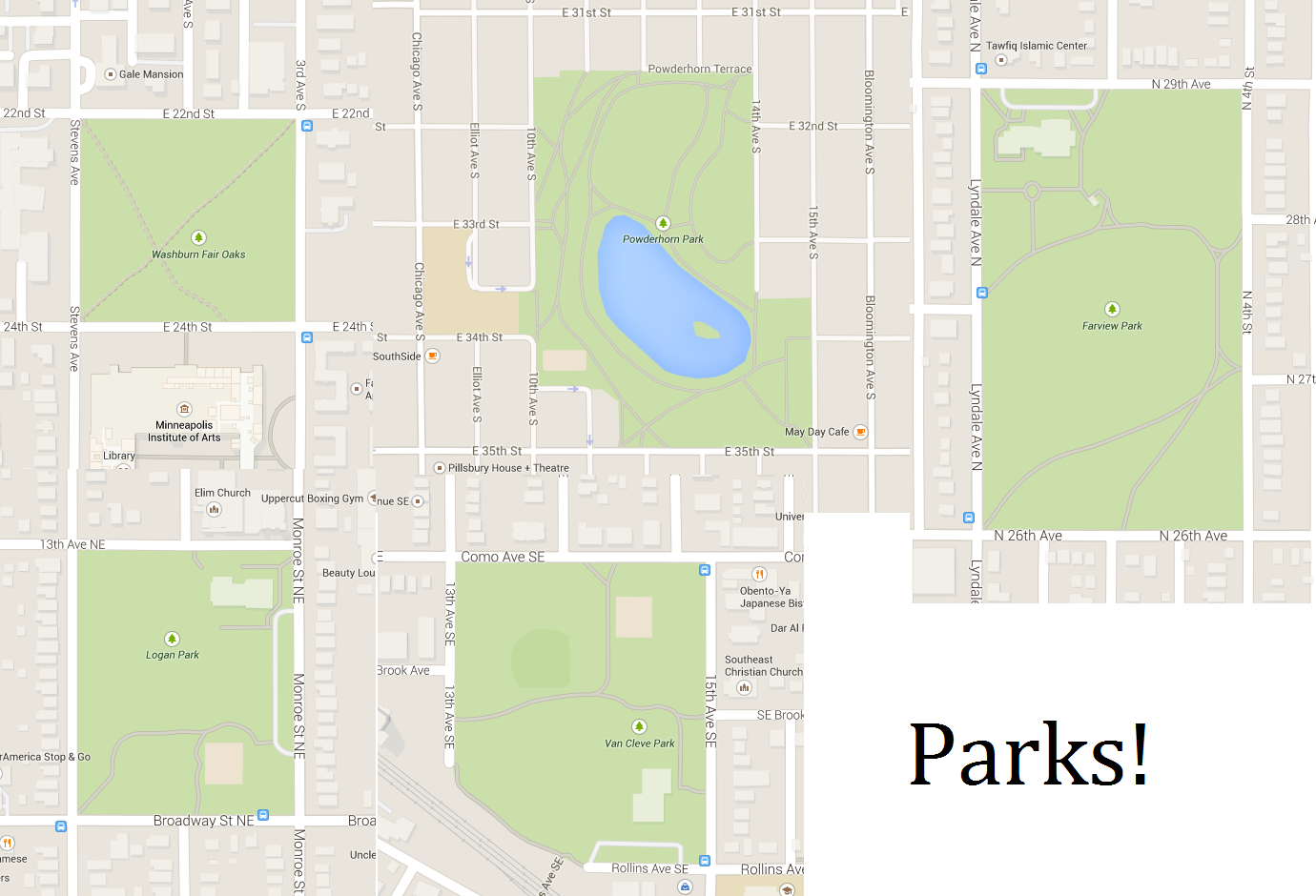 Five parks around the city that interrupt the grid, there are many more

The grid is good–we like grids. They make sense and are one of the main things that come to mind when you think of the difference between urban and suburban spaces and why one is probably a better template for city building than the other. If we were going to break up the grid, it would need to be for a project that was worth it. Not a parking lot, or a one-story big box chain store, or a four story apartment building. A park with the potential to become a major regional amenity is one thing that is worth it.

The whole topic is an unhealable sore wound for some, but the new Vikings stadium is going to be a gigantic, futuristic spaceship sitting on the edge of downtown, and it’s going to become a major symbol of this city for decades. Downtown East Commons is going to be sitting at its doorstep smack dab in the middle of an entirely new neighborhood, it’s going to be on national television more than just about anything else in the Twin Cities, and it’s going to figure into the Minneapolis experience for the tens of thousands of suburban and outstate Minnesotans who rarely come into town.

It would behoove us to take this offer of free (!) downtown land to create a larger, cohesive park. Do the specific arguments against this road closure have merit?

You have likely heard from Hennepin County elected officials and others that there was a study done, and that study said that we should not close Portland Avenue. So here we go, this is it–who cares about the study? Understandably, it’s hard to go against a study, and in particular to go against the idea of a study–we have a long and storied history in Minnesota of deferring to studies. If the study is wrong, then maybe all the studies could be wrong, maybe there won’t be 1,000 daily Southwest Light Rail trips from Kenwood, maybe we won’t be greeted as liberators in Iraq, maybe everything is pointless and random and meaningless and we all spent too much money on alumni association memberships. But let’s think this one through–who’s using Portland Avenue through this block?

Presumably, several thousand commuters. But where are they coming from? Where are they going? Do alternate routes exist? Alternate routes do exist, and hey, that’s the benefit of the grid (see: earlier acknowledgement that this logic cannot be extended into infinity & subjective determination that this park is worth the sacrifice). We’re talking about a pretty specific group here–folks who live Phillips and work in Elliot Park or the Mill District, or some vice versa combination of those things. Outside of that, it’s hard to feel incredibly sorry for commuters in, say, Powderhorn or further south. We have huge freeways ringing downtown and cutting through many other neighborhoods–are trips of several miles or more not good candidates for using the existing freeway?

There is a broader argument to be had about whether or not it’s a great idea to have these one-way pairs cutting through the city, whisking cars through at “thirty” miles an hour. Who knows how that conversation will play out, but this a place to continue it.

People have also mentioned ambulances accessing Hennepin County Medical Center, south of Downtown East Commons. This is hard to say without being snarky, so sorry, but here it is: the thing about ambulances is that they have sirens and can go as fast as they want and can blow red lights and cars move out of their way. Emergency vehicle access has never seemed like a particularly legitimate argument. Similar to the above paragraph–we’re really only talking about people who have a medical emergency in the Mill District. Otherwise, there are plenty of alternate routes. Should we have built six block-sized stadiums and rebuilt 5th Street, 9th Avenue, 10th Avenue through the stadium site? I regularly give blood at the Red Cross Blood Center over by the river, and if something went wrong, I am okay with the ambulance having to drive twenty seconds around the stadium site.

And actually, there appears to be a grid-breaking park and school literally across the street from Abbott Northwestern Hospital in South Minneapolis. It’s not exactly the same thing, as they ended up making a half block south of the school there, but the emergency room entrance is right there in the middle of the superblock along 10th Avenue South. How many lives have these extra two turns claimed among people who have medical emergencies three blocks east of the hospital? More or less than the McDonald’s inside the hospital? 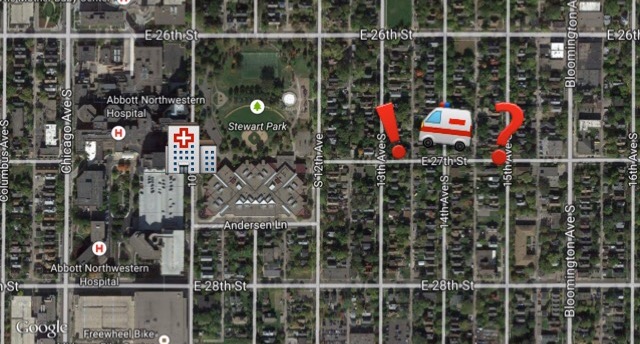 Because traffic flow after Vikings games has been mentioned, I’ll say that I think the entire idea of planning this area based on eight annual hours of traffic after Vikings games is ridiculous, but in any case, the remaining chunks of parking in Downtown East are either north of the park along Washington Avenue–which has an onramp to I-35W several blocks away–or south of the park near the giant claw of freeway on- and off-ramps near the Convention Center. We very specifically destroyed thousands and thousands of homes and businesses when the freeways were built in order to accommodate traffic in and out of Downtown Minneapolis. Let the freeways do their jobs. 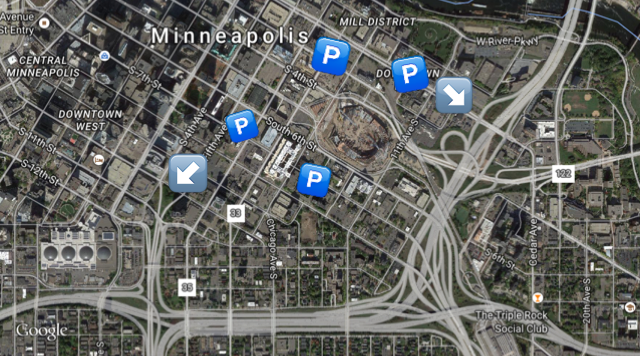 So I don’t know–is traffic going to be that big of an issue? It’s pretty easy for some schmuck to throw some emojis on Google Maps screenshots and say “and them’s the facts!” Are there maybe other examples, in this city maybe, of major street closures that did not lead to calamity?

There’s at least one!

One recent example of a successful street closure would be Washington Avenue Southeast through the University of Minnesota, where we stuck the Green Line. Initially, the plan had been to tunnel the train under campus, but Pawlenty happened and so we ended up putting it on the street through campus. Washington Avenue Southeast, also a county road, was closed to automobile traffic a few years ago, and a transit mall of sorts took its place.

One thing you’ll notice here is that on the left, there are many, many, many alternate routes. There are not very many alternate routes on the right. And yet, the tens of thousands of workers and students at the University of Minnesota figured out how to adjust their routines, and everything was fine. (Perhaps some of them were goaded into trading their far-flung Ski-U-Mah Lot parking space for a UPass.) Playing around with this nifty City of Minneapolis traffic map, there are between 4,800 and 7,300 cars a day (the block is between two measurements) on this stretch of Portland, while that stretch of Washington on the East Bank carried over 18,000. Traffic finds a way. (Jurassic Park joke) It’s not water in a flood. It can think and adapt and do different things and maybe even opt for a lifestyle change.

So this is an opportunity we have–and it’s a political decision we would need to get from Hennepin County. The area’s City Councilmember is in favor of the closure, and it would appear that a great deal of the area’s residents are as well, not that that necessarily indicates that this is the right decision. Should we close Portland Avenue for a block? We probably could close Portland Avenue for a block. In any case, there’s no harm in a pilot project that would cost close to $0 USD.