Via Planetizen, here’s an informative chart about an oft-discussed topic here on streets.mn: annual vehicle miles travelled. The nice thing here is that it attempts to correlate VMT with other economic and demographic data: 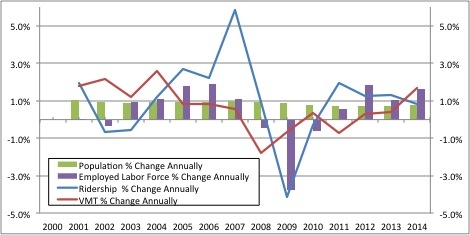 Fuel prices and a soft economy were important contributors to slowing VMT in the past decade, but the body of evidence suggests that other factors were also contributors. The population is slightly more urban with lower travel levels, millennials are traveling less, and people are substituting communications for travel with growth in e-commerce, e-learning, telecommuting, and texting and messaging in lieu of some social travel. Thus, a stronger economy and lower fuel prices are likely to restore some but not all of the historic growth in travel demand.

Declines in travel over the past several years included disproportionate declines in non-urban travel and in freight travel. These components are significantly impacted by both economic activity and fuel prices. Both are subject to rebound with a stronger economy and moderating fuel prices.

Based on a visual analysis of Figure 1, transit ridership has generally responded positively to labor force growth.

You can read the whole thing at their site. There are also tons of other charts and discussion of VMT in our archives.