Crosswalks have been disappearing in the suburbs.

As part of its ADA transition plan, MnDOT conducted an inventory of all 1171 signals with pedestrian push-buttons, with a plan to have all of the intersections in compliance with the ADA by 2030. Some high priority areas will be retrofitted as stand alone projects, but other intersections will be retrofitted when signals need replacing or other work in the area is being done. However, this is not cheap. A typical retrofit involves:

Besides the initial expense of a retrofit, the accessible pedestrian push-buttons also require ongoing maintenance. The new buttons tend to fail and need to be replaced and the button’s poles tend to get knocked over by drunk drivers. (Average cost to fix: $1000). Because of these costs, in some cases MnDOT is simply removing “redundant” non-compliant crosswalks rather than upgrading them.

An example in Eagan

Here’s an old Street View photo of Highway 13 and 55 in Eagan showing crosswalks in 2008:

But the crosswalks have been removed by 2011:

The south side of the intersection gets shiny new pedestrian signals and buttons. (Once they got away from lead based paint, you can see how poorly the newer formulations hold up on the 1990s era vehicle signals): 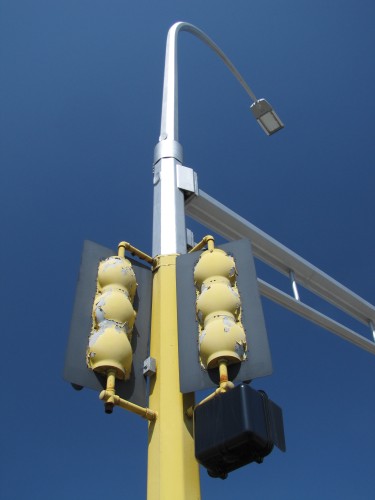 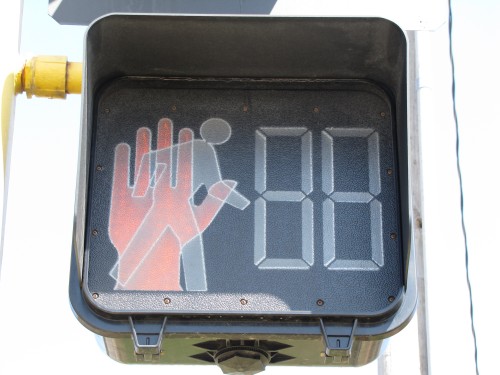 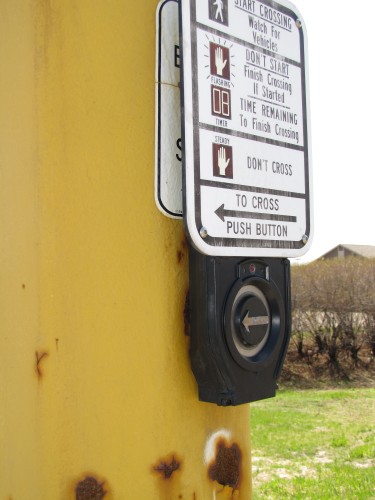 Shiny new audible-tactile push-button on top of the location of the old one.

However, the push-buttons and new signals are gone from north, west and east sides, replaced by shiny new “no pedestrian” signs. Whether or not to explicitly prohibit pedestrian movements where crosswalks, indications, and buttons were not provided was a subject of internal debate, as the signs were not being installed consistently. Eventually it was decided to always install them, as using engineering judgment, as opposed to following a policy, could expose the agency to liability. 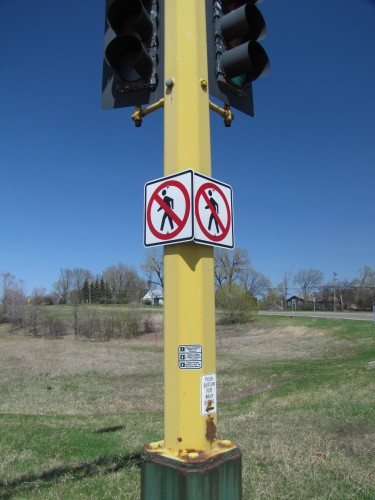 New “No Pedestrian” signs. Note the pipe nipples below the vehicle signals that used to hold the pedestrian signals, the stickers that they didn’t bother to scrape off, and the rust where the old push-button used to be. 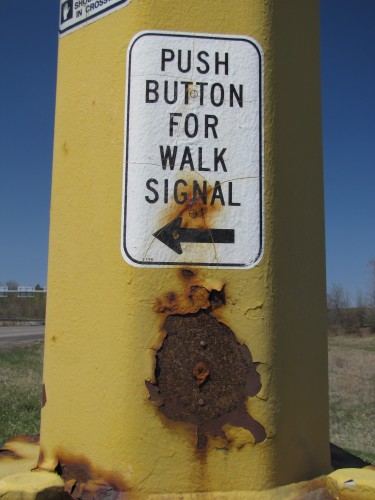 The problem with just putting up signs because the legal department requires it, is too many signs water down the message; too many stop signs muddies the water between “Danger- Stop!” and “We just want to punish you for having the nerve to drive through *our* neighborhood” while “Sl0w-Children at Play” signs communicate it’s OK to jaywalk and imply there aren’t children to watch out for in other areas. With all these no pedestrian signs, “We don’t feel it’s worth it to install accommodations” gets mixed up with the very few locations where it really is too dangerous or inappropriate for pedestrians.

The first “accessible pedestrian signals” date from the 1920s; these were a bell or buzzer attached at the request of a nearby person with a visual impairment. The “cuckoo and chirps” date from the 1970s based on a Japanese system. These were mounted on the opposite side of the intersection to serve as a “homing beacon”, but unfortunately tended to drown out traffic noise. The modern integrated push-buttons date from the 1990s.

Accessible pedestrian signals are not without controversy. Having push-buttons where there is always a “Walk” given may increase the already prevalent confusion about whether those buttons actually “do anything”. Even among disability-rights advocates, opinion is mixed. The American Council of the Blind wants APS signals at all intersections, but the National Federation of the Blind has been skeptical. Although they admit selective installation may be desirable, their position is that overall, persons with visual impairments usually don’t have difficulty navigating intersections so it’s trying to solve a nonexistent problem, and that the cost may provoke a backlash. On the surface, I’m sure I’m not the first person to raise eyebrows at nice new upgraded crosswalks leading to ditches along 55 mph highways. While out taking pictures, I was there for a half hour on a nice day, and not surprisingly didn’t see another pedestrian.

It may also be worth a broader discussion about where, if anywhere, not to provide pedestrian accommodations. Take US 14 and US 71, an intersection with a signal in literally the middle of the country. Unless someone wants to walk from once gasoline station to another, I don’t see much reason for pedestrians to be there. No accommodations are provided and no signs prohibit pedestrians. At the relatively new signal at 83rd Ave N. and Bottineau Boulevard, no pedestrian movements are accommodated and signs prohibit pedestrians from all three legs of the T intersection to the east. Walking along the east side is probably grossly dangerous since there’s a high-speed ramp from Bottineau to US 169, probably the intent is anyone walking in the ditch along Bottineau should stick to the west side, where a crosswalk is provided at the next intersection north. Or else there is a frontage road to the east, where a sidewalk or a multi-use path isn’t provided either.

I definitely feel extant crosswalks should not be removed, and it seems the cost to provide them for new signals is small in the relative scheme of things, probably less than expensive lawyers trying to reach a new common sense based agreement with disability rights advocates.

48 thoughts on “The Case of the Disappearing Crosswalk”