Here’s a map of cities that have the highest rates of “Millennial influx” according to Bloomberg: 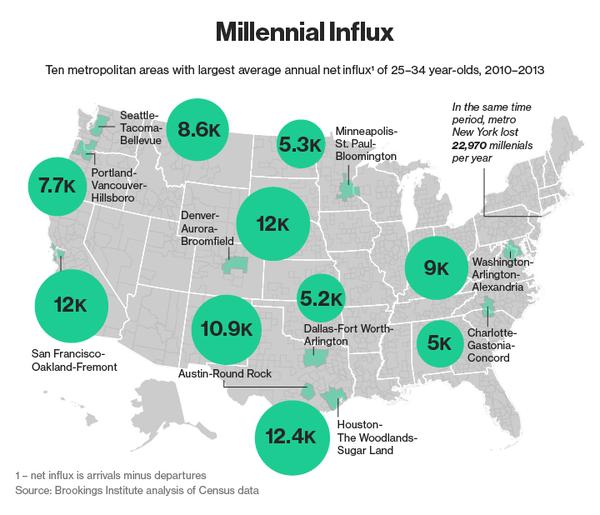 The theme of the article is that Millennials are moving West, and that sometimes they even stop in the Twin Cities and decide it’s far enough. (Warning: Article quotes Richard Florida!) Here’s the main idea:

Cities in the West and Southwest are experiencing economic growth exceeding records set before the financial crisis, with young, educated workers creating housing shortages and traffic jams as they drive up wages.

“The decline in manufacturing in the East, combined with an increase in service and technology jobs, is moving the country’s economic gravity westward,” said Kenan Fikri, a researcher at Washington’s Brookings Institution. “Compared to eastern cities, those in the West don’t have the economic baggage that comes from an industrial legacy.”

The center of U.S. population is moving steadily — it’s now in Texas County, Missouri, farthest west since the U.S. Census Bureau began tracking it in 1790. The movement is accelerating as workers from 25 to 34 move that way in disproportionate numbers.

Of course, we also hear that the Twin Cities is having a “youth exodus.” Honestly, I’m not sure what to believe, or even whether or not attracting millennials is a good thing in the first place.