Denver Union Station is up and running, and quite beautiful. I had the opportunity to stroll through on a visit to Denver last week, and it is a wonderful thing to know that thousands of people per day pass through this intermodal hub using transit and their own two feet. Most impressive is how well-designed and functional the public realm is at and around Union Station. The project is a seamless addition to the existing downtown, and a lovely place to walk. 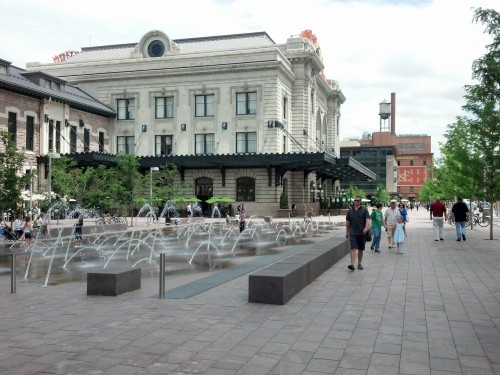 A recent Wall Street Journal article caught my eye, as it cites Union Station as a driver for a new speculative office tower in downtown Denver. New office buildings aren’t being developed in too many cities; this is evidence of the transformative power of excellent public realm and real transit investments. Part of the buildout of FasTracks, Denver Union Station is developed by a quasi-public entity and designed by SOM and is part of a plan over the past decade to build an intermodal hub connecting trains, buses, bus circulators and bicycles to the downtown grid. Starting last year, bus and Amtrak service began. The 16th Street Mall Shuttle has been bolstered by a new circulator and protected bike lanes. In 2016 rail service to Denver International Airport will commence, at which time Denver will be able to call itself a world class city (driving in from DIA we saw trains being tested; so damn exciting!). 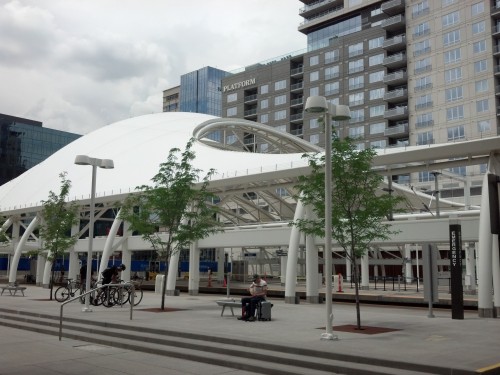 This interactive map at the RTD website shows the Union Station area and outlines the underground corridor that connects it all. An underground corridor connects the original Union Station waiting hall with heavy rail platforms, a 22-stall bus depot, light rail and the downtown bus circulators. This underground corridor is simple, elegant and highly functional for the 100,000-plus people who will eventually pass through daily (the current estimate is 35,000, a figure that doesn’t include hotel guests, restaurant guests, splash pad users, etc. – a 2012 post of mine highlighted the massive difference between passenger traffic in Denver versus Minneapolis and St. Paul intermodal hubs). 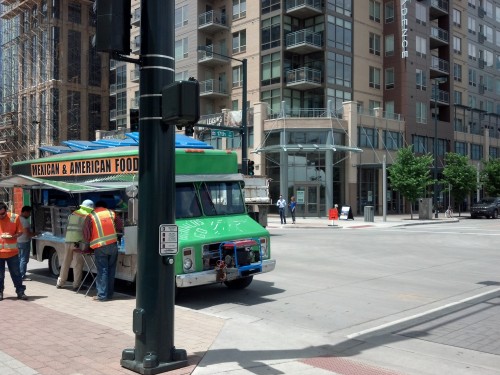 Denver Union Station is much more than an intermodal hub (such an unsexy term). It is a gathering place for the city, and has already been called “Denver’s living room.” The original building, now a century old, has been lovingly restored. The Crawford Hotel, named after Denver urban pioneer Dana Crawford, shares a lobby in the original waiting hall with shops and restaurants, as well as the present-day waiting hall. The underground corridor is mirrored by at grade circulation that follows the new 17th Street spine and plugs in to the surrounding grid that is rapidly developing. 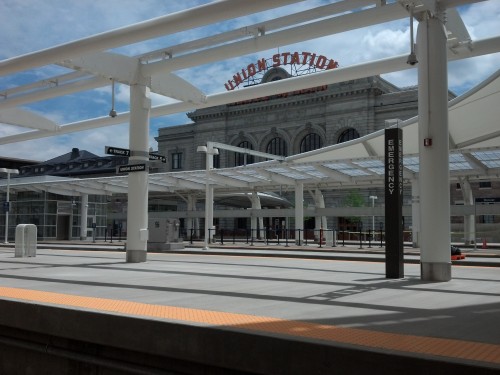 Approaching Denver Union Station on foot from any direction is a pleasure. Pedestrian passages around the original station hall are porous and welcoming, include shade, seating and an ubiquitous splash pad, and new restaurants line the sidewalks in buildings old and new. Denver has been utilizing a form-based code, paying closer attention to the relationship between the ground level of buildings and the public realm, and the results are positive. The Union Station and surrounding area seem to be built for people. I enjoy spending time there. 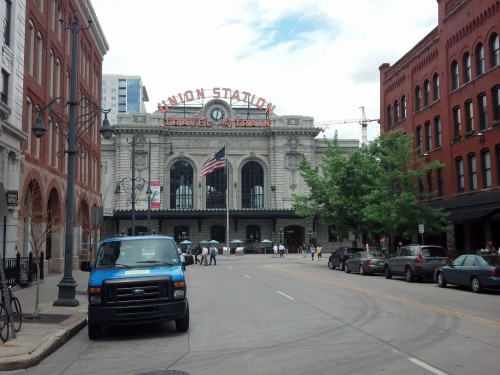 Denver Union Station is Walkable From All Directions

A veritable treasure trove of posts on Union Station can be found at Denver Infill; bookmark it. Also notable is there is no evidence of new parking created on the Union Station site itself. In fact, surface parking was removed for development. Not to worry suburbanists, plenty of parking is available nearby! 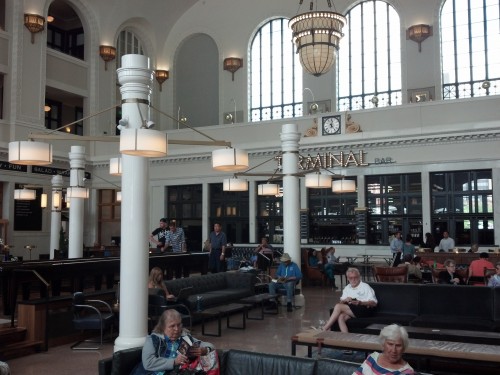 Denver Union Station is already a success. Not only does it serve a growing number of actual transit users, it is helping spur significant development in downtown Denver. Best of all, it adds beauty and pleasure to being in the city, and has rightfully been called Denver’s living room. I look forward to booking my flight next year so I can ride the train the new East Rail Line to downtown and enjoy all Denver has to offer.