As a continuation of my series on traffic signals, it’s time now to take a look at controllers. Traffic signal controllers can either be electro-mechanical (E/M), electronic, or a combination of both. 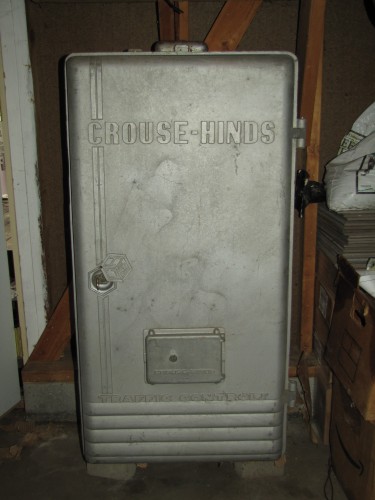 Electro-mechanical controllers date from the beginning of traffic signals up to new installations in New York City into the 2000s. I’ve placed a few short videos below, and there really is no substitution for viewing them to get a sense of how them parts move, but here’s a description and some still pictures first.

1) A dial with keys on it rotates, very much like a mechanical timer. Some used multiple dials for different timings on different times of day. The speed of the rotation is controlled by different gears that can be installed. 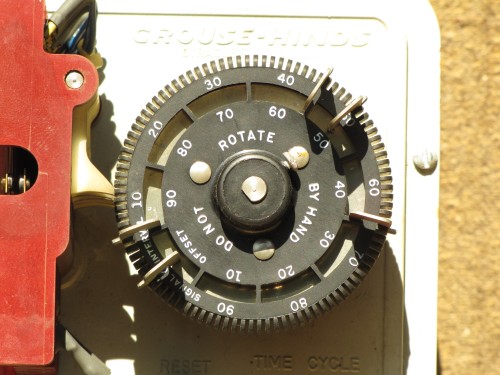 2) As the keys pass a micro-switch they temporarily close it to activates a solenoid or motor. The motor rotates a camshaft with cams. Each cam has lobes that can be moved or broken off around the perimeter. The knobs hold an array of piano switches open. Removing a lobe causes an individual switch to close when the cam is in that position. Each signal indication on each street is wired to one of these switches. 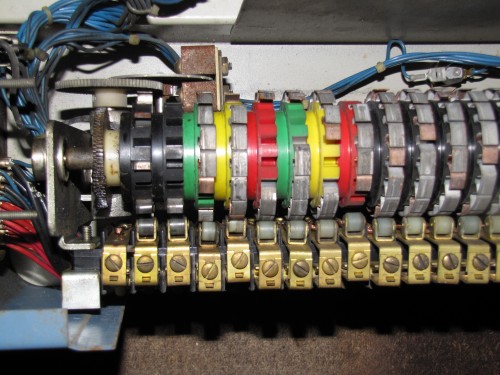 Camshaft, Cams, and Switches. Note some switches are in the closed position due to the metal lobes being removed from the cam, and some of the cams are color coded. Here the Main Street Green and Side Street red switches are closed and thus the lights would be lit.

Coordination is actually possible with E/M controllers. A mains wire runs from one controller to another, and a relay removes AC power to the controller downstream to prevent it from getting out of synch.

Video 1: Shows the outside of the controller

Video 2: Shows the inside and the dial rotating:

Video 3: Shows the dial, then the cams

Video 4: Closeup of the cams

This area tended to use Eagle E/M controllers. Crouse-Hinds controllers like mine (from probably the early 1970s in Moberly, MO), used motors instead of solenoids creating a whir instead of a clunk when moving the cams. Also, the cams have metal lobes that are replaceable, so if you make a mistake arranging cams or want to change things you can. With Eagle and other brands if you break a lobe off that’s it, you need to replace the entire cam to undo it. Cams are still available from one supplier, but there’s talk from signal collectors at having them 3D printed due to the expense and hassle of working with distributors. 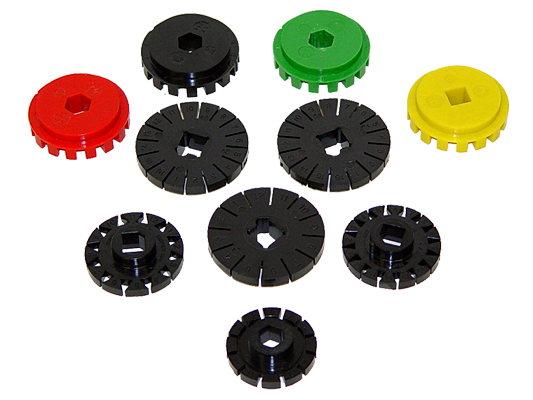 E/M Controllers may work well for fixed time applications, but they did not really handle actuation (where they respond to serve a vehicle or pedestrian phase).  This was more important with the rise of the suburbs, where traffic demand is less predictable and fewer traffic signals exist, rendering fixed time inefficient. Basically the timing was generated by vacuum tube electronics charging an absolutely huge oil filled capacitor, which would eventually discharge through the solenoid, moving the cams. The rate of charging, and thus timing was controlled by knobs on the front which are variable resistors.

Other items in an E/M or hybrid cabinet might include E/M timers to switch dials or put the cabinet in night flash, an E/M or electronic flasher, and transfer relays.

The first electronic controllers were designed as drop-in replacements for E/M controllers and used a lot of the same terminology and philosophy. The times were set by knobs and dip switches and such and each brand was proprietary. Gradually a standard (NEMA TS-1) was implemented to the connector from brand A was the same and each wire would do the same as brand B, and certain functionality was required, so you wouldn’t have to essentially replace the cabinet to switch controller brands. Later controllers went to a keypad with a few numeric LEDs, to program them you’d look up on the manual something like “Function 132 Main Street green time”. Later LCD displays were much more user friendly. Philisophically there was a switch from “percentage of dial times’ to programming in phases. 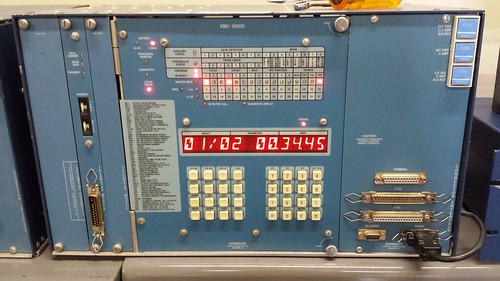 There are a few traffic signal collectors that tinker with these early controllers. Very few. Some of the flashing LED displays are fun to watch, but the connectors and documentation are hard to find, electronics do not age well, especially when unplugged for extended periods of time, and newer, much more user friendly, reliable and versatile models are available at attractive prices. So collectors usually use newer electronic models, or else old cool E/M ones.

Here is a simple demonstration cabinet with the components annotated. 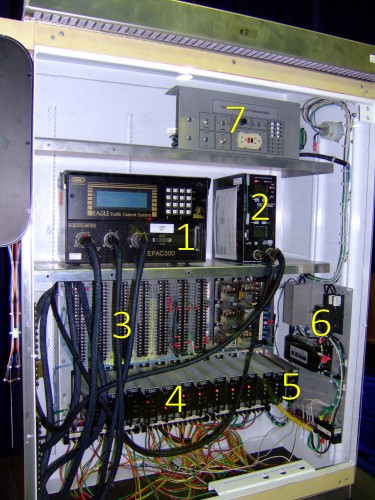 1) The controller itself: The actual controller. Inputs and outputs are 24 volts DC,

4) The load switches: These take the 24 volt outputs of the controller and control the mains electricity to the signals themselves, essentially solid state relays. Each load switch can control up to three indications, generally the red, green, and yellow of a single direction. 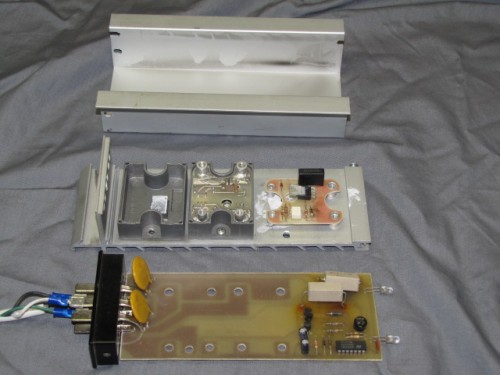 NEMA Flasher module, the load switch is similar but has a third solid state swtich module instead of the components on the main board.

In the real world it would likely be jammed full of equipment. The second shelf would have fiber optic communications equipment and pre-emption equipment, the manual controls would be mounted to the door and the top shelf filled with loop amplifiers or video detection equipment.

A newer standard is TS-2, which replaces some of the hard wiring with serial connections. Also available are 2070 cabinets, where the hardware is purchased separately from the software, and the controller is more modular, accepting various function cards. Minneapolis uses 2070 cabinets, the other agencies use NEMA.  The newest controllers are ATC, which combine some of the elements of NEMA and 2070 controllers and run on standard Linux, enabling more flexibility with software programs.

Here is my home setup. It’s a four phase sequential setup.  It lacks a conflict monitor (they are difficult to wire and in a home setup serve no real purpose unless you own a real cabinet, in which case it’s a pain to rewire the whole thing to not need one). Beyond the bare minimum to run some lights (controller, cable, load switches) it has a flasher and flash transfer relay, and some manual switches to put it into flash mode. The controller is an Eagle EPAC 300. Despite using Eagle signal heads, their controllers are not really used in this area. The EPAC series is a favorite of collectors since it’s (relatively) simple, new enough to be reliable but not too new to be complicated and expensive, and other collectors use them so help programming is available. I know there’s exposed wiring, but  it’s semi-protected and is in the basement where the pets don’t go. 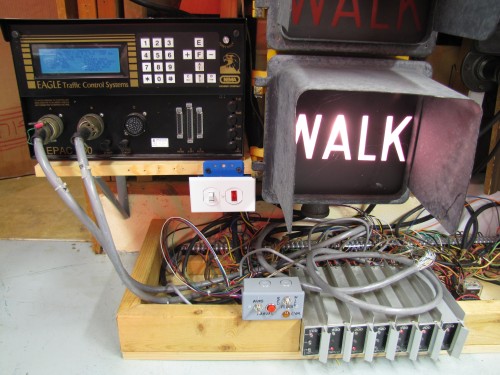 The controller I got for $75, and the load switches I got eight for $50 on eBay. Surplus dealers will buy a bunch of stuff at municipal auctions and try to flip them, not knowing that they’re essentially worthless unless an occasional collector wants one. No city is going to buy a 20 year old controller off eBay. Unfortunately the sellers can’t test the equipment and sell it “as-is”; they can’t even plug it in to see if it powers up because there’s no standard AC power cable, and it may be password protected which would require new firmware to clear.

The cables are by far the hardest to find because they tend to stay with the cabinet and get discarded when the cabinet is recycled, new bare connectors are close to $100 from electronics suppliers. I finally got some cables from another collector who is also a real signal tech. Obviously some knowledge of electronics and ability to work with mains current safely is required. But of the 175 pins on the three connectors, I’m only using less than three dozen, and a simple setup with two phases can get by with as little as 14. (10 outputs, one for each signal light, AC power, neutral and ground inputs, and 24 volt output to the load switches.)

I’ve used a bunch of terminal blocks from a local surplus store for much of the wiring. The load switches are designed to plug into Jones sockets in cabinets, but with a little coaxing they will accept standard female spade lugs. Load switches aren’t especially expensive or hard to find, but a bunch of 24 volt relays can also be used.  Wires to the signals are 4, 5, and 7 conductor “SOOW” cable, usually used for wiring industrial equipment.

It should be mentioned that all this is way overkill if you just want a traffic light in your garage or man cave. Single board  controllers are available that will drive a single signal and are easy to use. All that is involved is wiring a mains cord to the controller board, then each of the three lights to the board.  The 150 watt rating is good enough for any signal, even a 3M. Some serious signal collectors will use these too; some of them have no interest in real controllers, and may have signals scattered through their property instead of a single “signal saloon”. The main problem with these is there’s no protection on the output circuitry like a real load switch; a bulb burning out can occasionally damage them.

Finally, a video of my setup in operation. I  have fairly broad tastes (as broad as signal collecting can be) with stuff ranging from 1940s art deco signals to modern but unusual stuff to examples of signals common to this area with an interest in both lenses and LEDs and a particular interest in pedestrian signals.

Since I know people are wondering: Most of the signals I got from eBay or other collectors. The cheapest one was $25 (the St. Paul Durasig pedestrian signal); I have over $1000 invested in obtaining and restoring the neon pedestrian signal. Some collectors have bought new from distributors, but understandably they tend not to be friendly to collectors. They’re intrigued by the interest private collectors show, but at the same time they have a job to do and are more interested in a city that might buy 500 as opposed to some guy that wants one for his basement, and then decides it’s too expensive when he finds out the cost.

Part Two will show more detail on some of the programming screens of the Eagle EPAC.  Then shift gears to explain broadly why certain controllers might not do what we’d like or why they’re programmed a certain way, dealing with both philosophical / operational reasons and technical limitations. Part Three will continue that discussion in a “FAQ” format addressing specific questions that have or may come up.

1 thought on “All About Traffic Signal Controllers, Part One”