The cross section of the 36th Street bikeway from Richfield Rd/E Calhoun Pkwy to Dupont.

It was Spring 2015. Winter was done and my bike was ready to go.

Map of the bikeway from the City of Minneapolis. The TBD portion became a bike lane.

So, I pedaled my way south on Bryant all the way to 36th Street. I turned right, and… 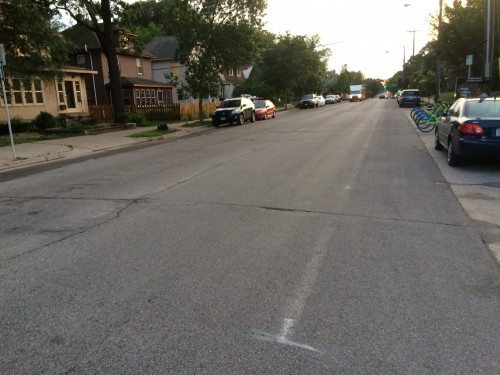 There’s supposed to be a bike lane here!

… nothing. Not even a sharrow. What a nasty surprise.

If I wasn’t an enthusiastic and confident cyclist (most people aren’t), I would’ve turned back. But, I figured I’d risk life and limb to bike the two blocks to the protected bikeway. I figured there’d at least be a clear way for bicyclists to to transition from westbound 36th to the bikeway, which is on the opposite side of the street. 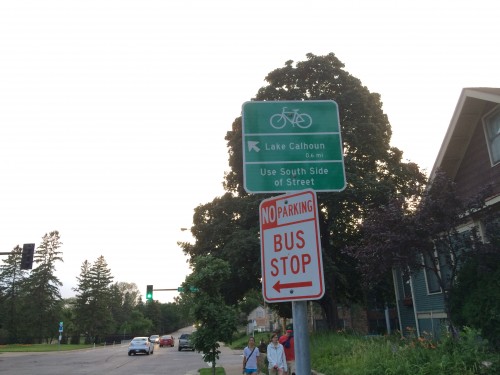 But how do I get there?

Nope. That doesn’t count. It’s helpful to know that I should transition to the south side of the street, but the sign really needs to tell me how to do that safely. And no, there were no helpful markings in the intersection.

This case is indicative of the importance of connecting bikeways to each other right away. In the Hennepin County Bicycle Plan, 81 percent of the people interviewed identified physical barriers, including gaps in the bikeway system, as a primary reason they don’t bike more.

In this case, because of the missing connection, most people living west of Dupont could only get to Bryant by taking 36th to Calhoun to the Midtown Greenway. Not very convenient.

Some may say, “Hey, they got the connection made in less than a year! That’s pretty quick!” Not quick enough. It’s likely those interested-but-concerned bikers tried 36th Street when it first opened and discovered there was no connection to Bryant Avenue. Some may have decided, “Well, maybe biking for transportation isn’t safe for me” and haven’t tried since. They might not ever try again. Also, because of this late connection, 36th Street probably left the bad impression that this type of bikeway is short and doesn’t get you anywhere.

Thankfully, the importance of connections and of filling in gaps is starting to be noticed. The Hennepin County Bike Plan puts a large focus on filling in gaps in the County’s bikeway system. In the City of Minneapolis’ Protected Bikeways Master Plan, filling the gap in the Hiawatha Trail is designated as a “Tier 2” bikeway to be completed by 2020.

However, even though there’s so much focus on filling big gaps, small gaps like the one at 36th still fall through the cracks. Minneapolis might run out of time to paint before construction season ends. There might be a delay in a utility project. Or there may be a completely different reason.

In a perfect world, there would be an effective temporary measure put in place. However, I realize that’s not always feasible, and that sometimes the best they can muster is a sign with a diagonal arrow.

Now, fast forward to last week: the bike lanes were painted. I biked down Bryant again and turned right into a bike lane. 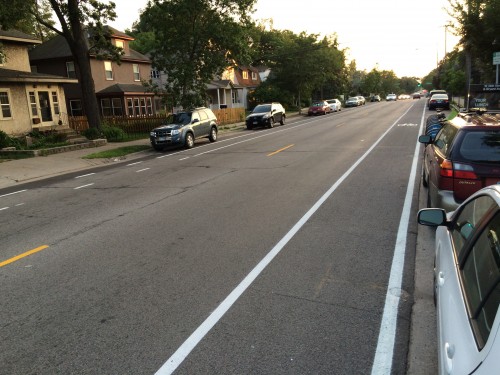 Not the best bike lanes ever, but they’re there!

Much better! Then, I got to 36th and Dupont. Gone was the useless sign, and in its place was a bright green two-stage turn! 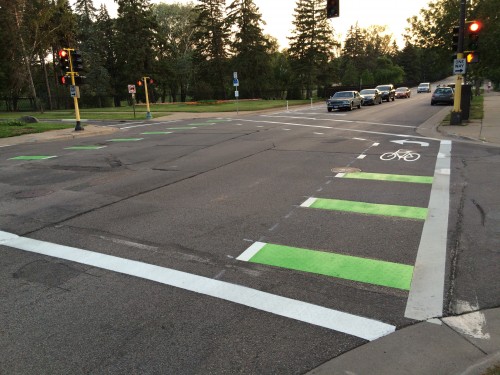 It’s clear for bikers and motorists. 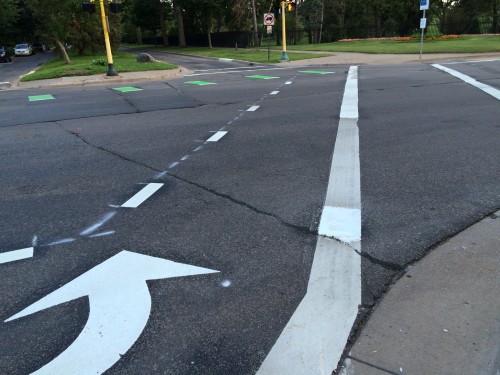 The second stage of the two-stage turn: crossing 36th.

This just goes to show that a bike network is only as good as it’s weakest (or nonexistent) link. I’m excited to see what’ll happen as Hennepin County and the City of Minneapolis create and strengthen those links over the next twenty-five years.

16 thoughts on “36th and Bryant are Finally Connected”