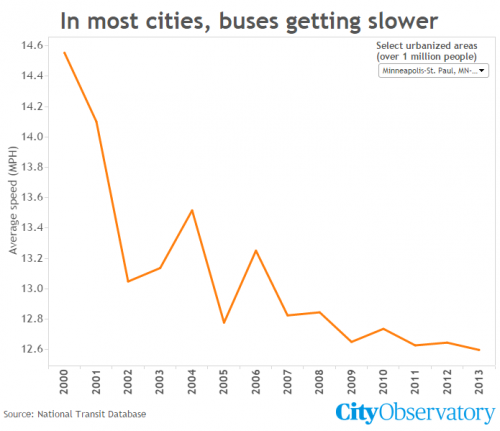 Today’s chart of the day comes from a post at City Observatory by Daniel Kay Hertz highlighting a nationwide trend of average urban bus speeds dropping since 2000. The piece goes into the trouble in dealing with nationwide data in evaluating cause and effect of this reduction and questioning if bus service cuts play a significant role in speed reduction.

It’s also possible that average speeds could decline without any clearly negative impacts on service. Our measure of system-wide bus speeds will pick up changes in the mix of route types that a city runs, so some year-over-year changes may reflect that, rather than changes in the speed of any particular route. Imagine, for example, a transit agency that decides to cut back on suburb-to-city commuter express buses with little ridership and instead focus on local routes in neighborhoods where residents, jobs, and amenities are more densely packed. That would almost certainly reduce the agency’s average bus speed, but might at the same time increase the number of people with access to useful transit service.

Of course, bus speed is not the only measure of high quality transit service:

While vehicle speed isn’t the only, or even most important, factor in good bus service, it does matter—and slow speeds are hardly inevitable. Better stop spacing, all-door or proof-of-payment boarding, and bus lanes can all dramatically improve speeds. The current downward trend suggests that these interventions may be increasingly needed.

I’m interested if readers have any data or anecdotes about what factors may have played into the drop in our own region, which came in at 6th highest of all transit systems sampled.