Call them whatever you want; Airbnb, Vacation Rentals by Owner, HomeAway. You’ve probably heard about them in the news. Maybe you even stayed in one and wrote about it for a streets.mn post! Whatever you might call them, I’m talking about the ability to rent out anything from a spare couch to a whole unit or home on to strangers for one to 30 days, with the host either present or absent. I’m of the opinion that we should make them fully legal in Minneapolis and St. Paul. Let me convince you! 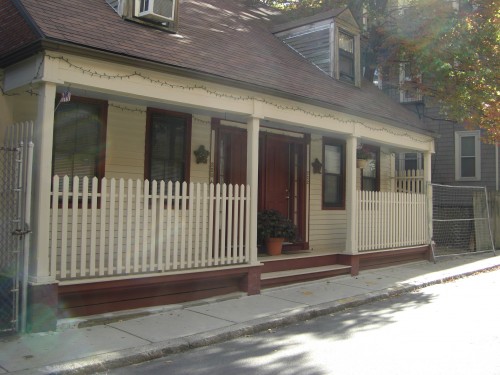 An alley-facing two-unit vacation rental in Boston my wife and I stayed in. Owner lived on the left, rented the right out while his daughter was in school.

If we’re being technical, someone could legally rent out their unit (or a bedroom inside it) as a short-term rental under state and city laws. The State of Minnesota defines a Bed and Breakfast as:

Owner occupied establishments which offer lodging and breakfast, without a limitation on the number of rooms offered. If breakfast is offered to more than 10 persons, a commercial kitchen is required.

While this doesn’t cover whole units run nearly full-time as a short-term rental, it covers many use cases. Of course, to operate one of these, you’d need:

At a glance, a single home or unit that meets the building code shouldn’t have a hard time meeting these requirements. The annual license fee assuming one guest lodging unit is $10 plus a $35 flat fee. Nothing too onerous. You’ll have to pay all state and local hospitality taxes, which is sort of unclear how that’s done with services like Airbnb (at least, in locations where they they don’t have streamlined occupancy tax collection & payment figured out). Finally, the state requires lodging establishments to follow all local zoning regulations before they’ll issue a license, which brings us to…

Local zoning! I’ll focus on Minneapolis here, as I suspect St. Paul (and many suburbs) are pretty similar. Again, technically, short-term rentals are legal in some parts of the city. Like the state, a “bed and breakfast” is the closest definition for VRBO-style units:

Bed and breakfast facility is an establishment where short–term lodging is provided for compensation which may include breakfast meal service to guests only. Such facility is subject to additional requirements in the codes referred to in section 297A.50.

As with the state, you need a license (which will set you back $155 a year), and to meet certain building and maintenance requirements, plus inspectors may come in at any time.

When I say we should legalize short-term rentals, I’m mostly referring to zoning. Here’s which zoning districts bed and breakfasts are allowed in Minneapolis: 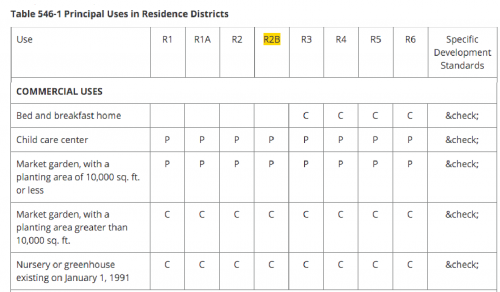 Basically, anything R3 and above allow them. As I’ve noted before, most of the city is zoned R2 and lower. Even at R3 and up, one can only open a BnB with a Conditional Use Permit, which requires a fairly intensive application process to simply rent out a spare bed, room, or unit. By comparison, someone can open an in-home daycare center or place of worship by right in any zone–uses that are more likely to bring traffic and noise nuisance issues.

As a neutral observer–I’ve never worked for any firms in the short-term rental business–the biggest benefits to making these legal with fewer regulatory hurdles are flexibility and building local, independent business culture. 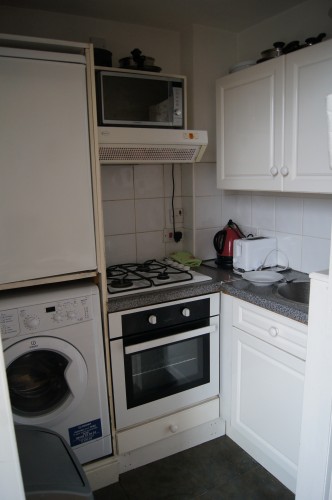 When I say flexibility, I mean for potential renters as well as property listers. On the demand side, I can say from experience that VRBO has offered properties in locations at prices I simply wouldn’t have found in the typical hotel market. Not always, of course. For example, in 2013 my wife and I took a trip to London and Paris. We found a small apartment in central London, about a mile walk from Big Ben (even closer to Piccadilly Circus and Seven Dials) for a price we simply could not find on the hotel market. We got the benefit of a kitchen to help lower our trip’s food bill, with the tradeoff being a less well-appointed living space and bathroom.

In 2014, myself and nine friends rented out two separate ADU units in Boulder, CO for a wedding weekend. The multi-room nature of each structure allowed the married couples some privacy while the single dudes could share a bed, all for less than if we had rented three hotel rooms (and again, they were in a far better location). Anecdata aside, standard hotels have price floors given the regulations they need to meet with the resulting construction and operation costs per unit. Short-term rentals can (though not always) meet a lower market tier.

Flexibility extends beyond the leisure or business traveler, as well. Many people move between cities and require short-term housing while they settle into their job and look for an apartment or home. While there are short-term availability apartments, they may not suit the needs of many relocators. We used to have a range of housing options for people of all incomes and tenancy requirements. As the City Journal says:

Single men had a strong order of preference among these various alternatives: They preferred lodging and boarding houses to cages, cages to dormitories, dormitories to flops, and flops to the city’s shelters. Men could act on these preferences by moving as their incomes increased.

In today’s New York, however, many of these housing choices are no longer available. City regulations designed to eliminate these classes of housing have left the very poor only the choice between a shelter or the street.

For property owners, the ability to rent out a spare room to help make the mortgage (or rent), one of Airbnb’s big marketing messages, is only one piece of the flexibility argument. Imagine someone building an ADU in their backyard for their mother-in-law, but it’s still a few years until she may need it. Maybe you’re the type who has family visit throughout the year for extended stays and want a nice finished space for them, but it would go unused the remaining 75% of days. Maybe you personally are gone half the year. Making it possible for people to choose how often they want to rent out space in their home should be on the table as an income generator in our cities. I’m not naive, somewhere between 95 and 99% of people don’t want a stranger sleeping on their couch or basement bedroom. That’s fine, but some do, and they represent… 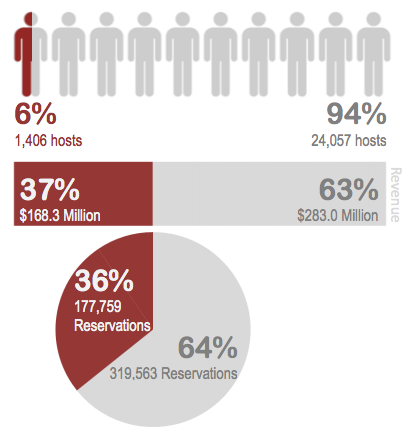 One of the primary arguments against Airbnb and other hosting sites is that commercial landlords make up a sizable chunk of units and revenue in a given market. A New York Attorney General report found that 6% of Airbnb rentals were commercial users with 3+ unique units, but they made up over one third of NYC Airbnb revenue and reservations (see right).

This Buzzfeed analysis of Airbnb data found hosts with at least three entire-home listings accounted for 18% of all NYC Airbnb revenue.

Since this runs contrary to Airbnb’s selling point of benefitting Regular Joes with a spare room, it must be bad, right? Let me put that into context. The United States hotel industry is made up of several large players, a good number of medium hotel companies, and a relatively short “long tail” of firms. This chart shows the market share top three hotel chains in the US:

That’s 36% of revenues to the top 3 chains. There are other chains with similar number of rooms not listed here. Yes, the majority of hotels are actually owned as franchises rather than managed directly by the hotel firm itself (this IHG fact sheet shows about 88% are franchised). But a typical franchise hotel owner usually owns multiple properties in their given region. So if you’re an urban liberal who supports local business, which is worse: a 200 unit hotel franchise owned by an individual with likely multiple similar properties, or an Airbnb unit owned by a commercial landlord with 6 other similar units in your city? Which policy is more likely to have a vast network of individuals offering unique experiences to tourists in our charming neighborhoods?

I believe there’s a healthy middle ground to allow but regulate this activity. I can guarantee almost none of the ~500 Minneapolis units listed on Airbnb have proper licenses from the city and state. They’re probably also not paying the required taxes. We need to streamline the processes necessary to get them up to snuff.

At the same time, there are maybe some regulations targeted at health and safety that fit a large hotel model that maybe don’t apply to a single room or unit. It might not make sense to require all of them.

In exchange for a simpler zoning, licensing, and tax collection processes, we should consider requiring commercial insurance, strictly enforce nuisance complaints, and raise the penalty for operating illegal short-term rentals. We should also consider some protections for hosts to prevent horror stories like this.

Finally, to the folks complaining that short-term rentals like Airbnb raise housing prices by pulling otherwise rentable units off the market…welcome to the party. Supply and demand do indeed exist, and you can’t pick and choose when to invoke them (i.e. argue against the notion that new supply helps affordability). I agree there are potential instances where a low-rent unit could be turned into a higher-margin VRBO by evicting residents. We need a broader policy on tenant’s rights in the Twin Cities. But even in the red-hot NYC market, that study found that “the average rent increase in this timeframe [2005-07 to 2011-13] was 9.76% for the top 20 zip codes for Airbnb usage, compared to 9.30% for the entire city.” That’s a pretty small difference, one that’s probably also explained by other factors.

In any case, short-term rentals offer up a more locally-sourced option for leisure, and even business, travelers while providing a potential source of income to folks much lower on the income ladder than typical hotel owners. I think they should be legal. What do you think?