There was an article today in the Star Tribune by Steve Brandt (he of “the bike lobby wants to lower the speed limit“) asking whether Minneapolis has enough bike lanes already. Aside from saying, no, we don’t have enough and yes, we need more, I’ll leave it to those who are more plugged-in to local bike advocacy and infrastructure planning to respond to the substance. I want to focus on something else. 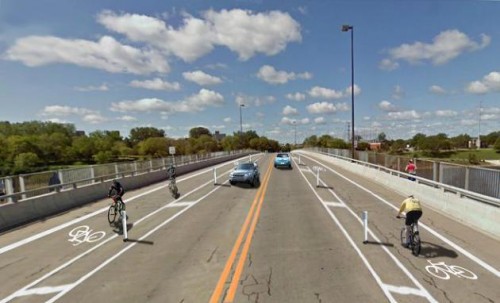 Are these all the bike lanes we need?

Brandt tells us that because we already have so many bike lanes, “some are wondering, how much is enough?”

Huh. Who are these some? The article doesn’t directly say. Let’s look for clues in the rest of the article.

“Are we going to have a protected bike lane on every street?” asked City Council President Barbara Johnson, noting business concerns about plans to add barrier-protected bike lanes plus greenery to Third Avenue S. through downtown this summer.

Well, I guess she could be the “some.” I certainly hope she is, because that’s the obvious implication and I would hope her views aren’t being misrepresented. But she’s not quoted as wondering whether we have enough already, so we don’t really know.

Brandt goes through a bunch of numbers about how many lane miles we already have and how we stack up against other cities (although apparently only American cities, because I don’t think Minneapolis is actually way ahead of Copenhagen or Amsterdam among large cities with bike facilities). With all these details, maybe there’s an advocacy group or traffic planning expert who is the “some” that is the basis for this entire article. But if that’s the case, why isn’t it identified?

The only other theory I could come up with is that Brandt himself is the some. But that doesn’t make any sense either, because this is a news article not an opinion piece, and Brandt is a reporter not a columnist. And, of course, he doesn’t tell us it’s his opinion, he relies on the amorphous “some.”

Left unable to reach a conclusion from the article itself, I asked Brandt about it on Twitter. This was his response as to who the “some” are:

@ajm6792 Ordinary readers who call or e-mail me when I write re bike infrastructure. See online comments after recent stories.

I want to be perfectly clear that I know nothing about how journalism is practiced or about its ethics, but nonetheless, this answer shocked me. “Some” isn’t the city council president (or the out-state legislator who is also inexplicably quoted on something way outside his jurisdiction). It’s not an organization or a group. It’s not even Brandt. It’s a few random unidentified people.

And worse, he doesn’t tell the reader that. Readers are given no context at all as to who or how many the “some” is and thus are left entirely in the dark about how much they should credit the opinion of the “some.”  Apparently it doesn’t matter, because Brandt (and/or his editor) has decided that these are opinions that need a broader airing and readers don’t need to know who holds them.

I have to wonder, would this even have been published if instead of “some” it said, “an unknown number of people who have sent me unsolicited emails and people who left comments on the online versions of my articles?” Sadly, I suppose it would have.

But there’s a lesson here for advocates. Apparently, all it takes to get a news article published about a purported trend is a few pings in a journalist’s inbox. I guess we’ve got some more addresses to add when we’re writing to our elected representatives.