One of the most paradoxical aspects of the downtown Rochester ecosystem, is the relationship between Destination Medical Center (DMC) and Mayo Clinic.  It is quite the dichotomy.  On the one hand, Mayo Clinic is DMC.  They were the ones responsible for its inception; the ones who felt compelled to act and create DMC.  The ones who ultimately advocated to the local voters and state legislators for its institution.

On the other hand, Mayo Clinic and DMC want different things.  Mayo Clinic is fundamentally a hospital and as a part of that typology, they need to control all aspects of a building.  The design decisions–all the way down to the type of flooring–carry with them health care implications, and thus, the campus is extremely inward focused.  From HVAC systems to anti-microbial finishes, what happens inside the Mayo Clinic buildings are finely tuned.  For DMC, they want activation, vibrancy, vitality, and the entropic environment that makes cities such exciting places.  These places are wholly uncontrollable outside of the hermetically sealed buildings on campus.

But quite frankly, the Mayo Clinic is running out (some would say has run out) of space.  Demand is at an all time high and supply is low.  As a result–as the saying goes–beggars cannot be choosers.  And so many spaces currently leased/occupied by Mayo Clinic are not in the most ideal locations.  In particular, the ground floors of buildings that front the most urban streets.

What would happen if all Mayo Clinic office space was vacated on the ground level of buildings surrounding the Second Street SW and First Avenue SW intersection?

This epicenter of activity for the Mayo Clinic and the “Heart of the City” (home to Thursdays on First), is currently dominated by commercial office space.  In urban design parlance, this is considered a passive use.  In contrast, an active use consists of retail, restaurant, or services that promote a high amount of pedestrian interaction.  The NE corner of this intersection is a perfect example of active uses (Eagle Drug Store, Essence Skin Salon).  However the SW, SE and NW corners are all populated with ground floor space occupied by Mayo Clinic.  Private offices and conference rooms most of which have the shades all but permanently drawn. 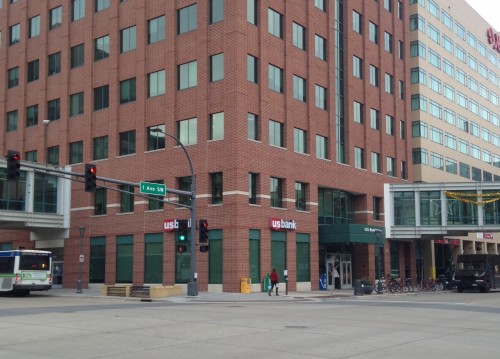 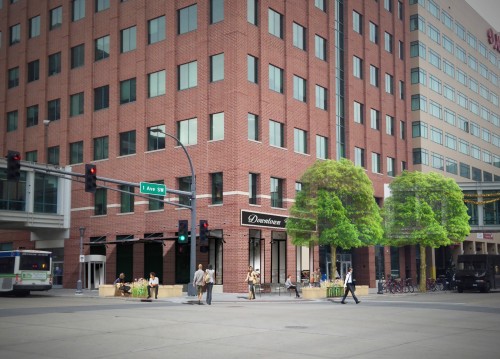 The amount of untapped potential that exists in this node of the downtown core is wasted on windows with shades drawn, a lack of entrances, and narrow concrete sidewalks in need of expansion and activation. The base of these buildings should relate to the human scale and allow for interaction between indoors and out. Ground floor uses and retail activities should spill out into the sidewalks and streets to blur the distinction between public and private space. Preferably, active ground floor uses that create enriched experiences along each street for both pedestrians and motorists. Sidewalk activity has been shown to slow vehicular traffic to make pedestrians feel safer when crossing the street. 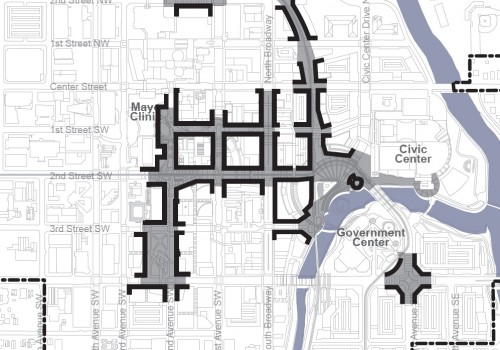 Consider what might happen if Mayo Clinic decided to sublease all of their space on this one intersection to other uses, or left entirely to occupy less demanded square footage: the impact on Rochester’s downtown core would be minimal, but the precedent that such an action would create could formalize additional development down the street through the Urban Village and future University of Minnesota Rochester campus. We should be so lucky to have a downtown with these visions of complete streets that are vibrant, accessible, convenient to public transit, linked to surrounding neighborhoods, safer and healthier. 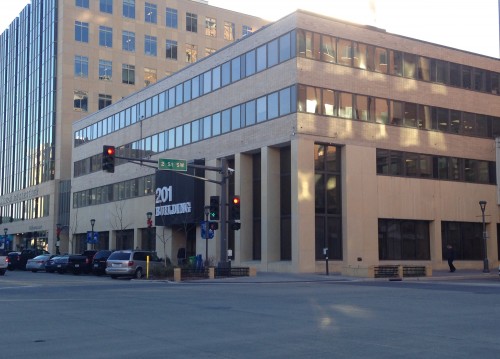 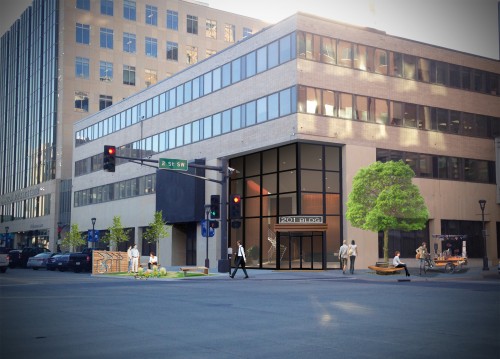 Arguably, this Mayo Clinic condition (trend, precedent, rut?) has a much greater impact on the decreased vibrancy of our streetscapes than the skyways ever have.

Or put another way, the skyways are here to stay, but why don’t we make the street a more compelling place to be instead?

5 thoughts on “Active Streetscapes and the Role of Mayo Clinic”