I’m not sure if my living situation qualifies as “outstate” as much as it feels like it sometime. There is a barn on my property, along with a grain silo. Two of our neighbors have horse pastures, and agricultural is still a large part of the community. But I live in Becker, located in Sherburne County. It is located on Highway 10, a corridor served by public transit that directly connects St. Cloud with the Twin Cities. For some purposes, the area is considered part of the Twin Cities thanks in part to the sprawling exurbs that are also considered to be a part of central Minnesota. As much as I want to freelance, I don’t actually work in Becker. Instead I choose to work on the north side of St. Cloud at an organic food co-op. Depending on the weather, I’m able to use a combination of bikes, buses, and my own feet to get there.

To begin with, I have to get to the bus stop in Becker. The stop isn’t recognized by Google Maps, so I had to use the name of an old cafe that used to share the parking lot with the stop. I live just east of the intersection of CR 73 and 165th Avenue, which gives me three options of similar distance. For the most part, I usually take the highlighted option.

Route options to get me to the Park and Ride

It feels like the most direct route, and traffic is usually minimal. There are a handful of houses on this street that sit on the river. The other side of the street is almost entirely agricultural. Most mornings, only three or four cars pass me on my way in, and I think this might be part of the reason why: 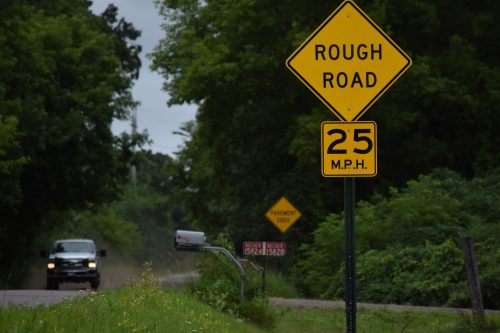 Several years back, the decision was made to pave this road. But not the entire section, just the short stretch where some of the houses are closer to the street instead of down on the river. It gets graded each year, but not often to keep the gravel section from turning into a bumpy “washboard” surface. It’s not great, but at least on my bike I can maneuver around some of the rougher patches. It’s also nice not having to worry about traffic when I leave in the morning. After passing by a couple of relatively new residential neighborhoods, I reach CR 24, seen on the map as Central Avenue. This road is paved, and just last year an off-road trail was added to make the river crossing a little safer. I’m still waiting for it to be finished though, and in the meantime I will usually bike on the shoulder unless there is traffic. 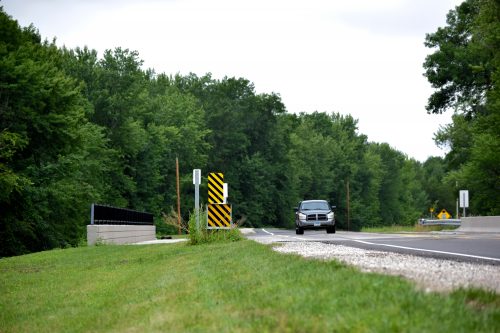 This pedestrian bridge is the only paved portion of the new trail. It isn’t long before it joins up with the trails and sidewalks in the city, but I hope this section is completed before the school year starts so kids (and myself) can make it into town safely when the weather turns.

Lately, I’ve started taking a different route into town, which is shown on the map as Highway 10. While the highway does have wide shoulders, there is a trail that runs parallel to the highway. This connects 137th Street to Bank Street near the hotel seen in the background of the first photo. 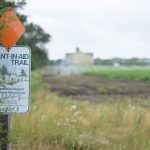 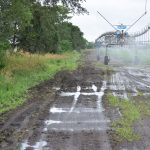 I seem to be the only recreational user in the summer. The only other people I see on this trail in the summer appear to be migrant farm workers tending the potato fields. The irrigation system can be a hassle too, and I usually have to end up walking my bike through and around some of the water that pools up.

During the winter, a marked snowmobile trail cuts across the fields and brings me almost directly to the beginning of my route at the intersection of CR 73 and 165th Avenue. This skips most of 137th Street entirely, but during the summer time I have this wide open road to travel down. 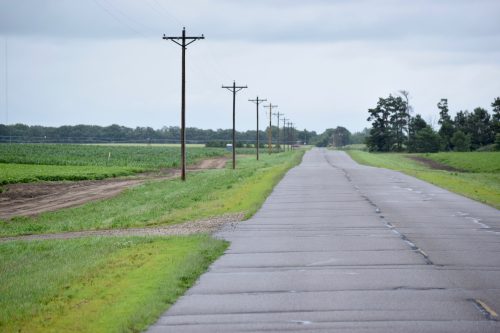 I always avoid the third option of taking 117th Street. The shoulders are small and unpaved, and there is a decent amount of car traffic. So, one way or another I end up here at the park and ride. 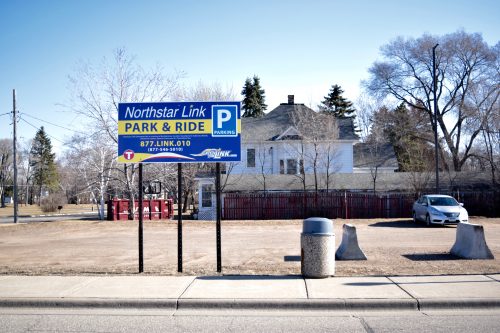 I don’t usually like to bring my bike to St. Cloud with me for some reason. I ride a mountain bike to handle the gravel roads, and most days it ends up locked here until I come back. There have been no standard bike racks installed here, so I lock it up to the Park and Ride sign seen above. The bus ride is nice, it takes about 25 minutes and there is only one stop light between Becker and St. Cloud. According to one of the drivers, the buses used for this route are aging, most of them already well over the million mile mark. Sometimes the wheelchair lift gets stuck, other times there are more than two bikes and the remaining need to be stowed in the cargo bay underneath. 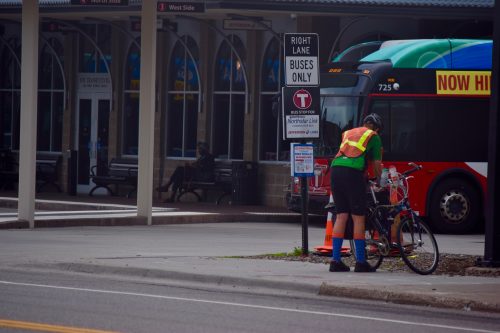 There are three stops in St. Cloud–the park and ride, the Downtown Transit Center, and the University. During the school year, some of the drivers will skip the Downtown stop entirely and just head straight to the University. Then they look in the mirror and see that I haven’t gotten off, and apologize for mistaking me as a student. Fair enough, I’m young and wear a backpack, but after three or four times I had to start reminding some of the drivers when I got on. When the weather is poor and I have time to kill, I sometimes do end up in the University library. I can’t use the wireless internet, but I can catch up on my reading or writing or just pick up a copy of the newspaper up front.

Otherwise, I’ll get off downtown to make my way to Centennial Plaza. The #4 Northside route runs directly to the Plaza, but if it’s nice out I like to walk the route. I like walking right along the Mississippi in the morning, but at the moment downtown is cut off from 5th Avenue North by the construction of this parking ramp. 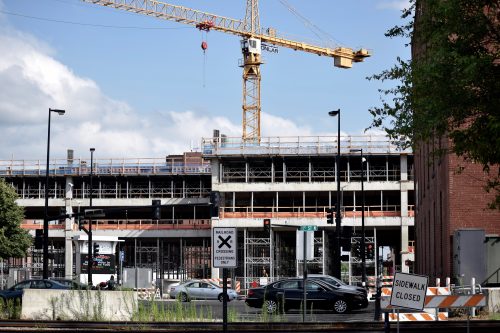 More parking for your car

The Mississippi River Trail, or MRT, also runs along this stretch of 5th Avenue. Under construction right now is this section of off-road trail that runs along the river, bypassing the intersection of East St. Germain Street. It should be noted that while the MRT runs on the opposite side of the river from where I live, I have biked from St. Cloud to Becker using CR 8. It isn’t part of the trail, but it runs along the east side of the river and is marked on the MRT map as having wide, paved shoulders. 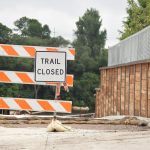 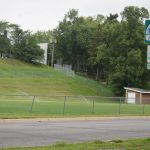 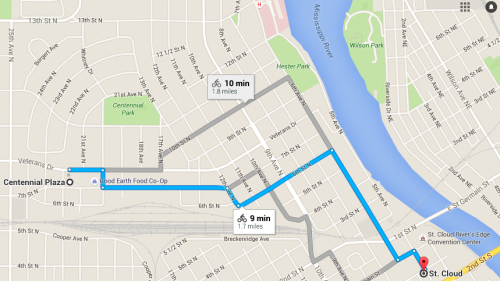 I find it odd that these bike directions seem to try their hardest to keep me from biking on any of the actual bike routes in the city. One of the marked routes in St. Cloud is on 8th Avenue north, which isn’t highlighted on the map. There is also a marked route on 11th Street north, which is also avoided for some reason. 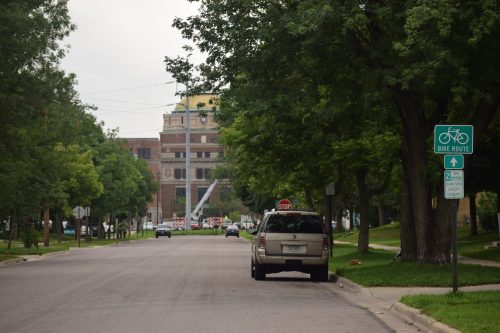 The entire trip is 28 miles. If the weather is bad and I end up taking the bus while in St. Cloud itself, the total fare is $4.50: $2 total for the Northstar Link, and $2.50 for Metro Bus. My Go-to card from Metro Transit in the Twin Cities is accepted on the Northstar, but not in the St. Cloud system itself. Overall it’s not a bad deal for the distance traveled. Since my sister goes to school in Becker, I was getting a ride into town from her during the cold months. I didn’t start cycling until the summer, but I’d like to get the appropriate bike and gear to handle the snow and cold.