Bicycles and cars on Cleveland Avenue in St Paul. Both should pay their fair share (and cars should stay in their lane lest they kill someone).

A reader recently wrote to our local paper suggesting that bicycle riders should pay for their share of the roads they use. I quite agree. I think all users should pay their fair share.

I’m a strong believer in personal responsibility and that we should each pay for what we use. This makes for better decision making and creates much more efficient use of scarce resources than when the costs of using these resources are not tied to our choices.

Historically we paid for our roads with taxes on gasoline. In theory the amount of gas you used was roughly equivalent to the wear and tear you placed on the road system. In reality it was extremely rough but it sort of worked.

As the costs to build and maintain our roads and bridges have increased, gas tax revenue has not. This largely due to increased fuel economy and the tax being a fixed amount per gallon instead of tied to inflation. Politicians were afraid to increase the gas tax appropriately, so either maintenance was foregone or the gap was filled with easier to vote on general funds.

Today, less than half of the costs to build, maintain, and operate our road system are paid for from such user fees, with the bulk coming from general tax revenue — mostly property taxes.

This will only get worse. Electric cars use no gasoline and so do not contribute to this part of road costs. Not a problem today, with Battery Electric Vehicle’s (BEV’s) accounting for just over 1% of US auto sales. However, by 2025 BEV’s are expected to comprise between 25% and 100% of US auto sales. 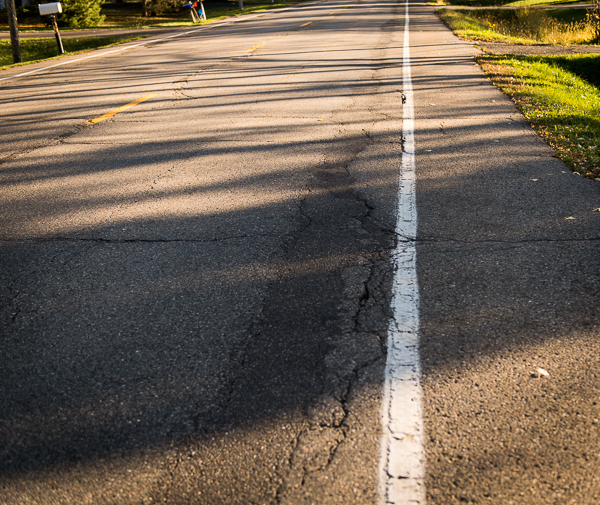 I don’t think this long rough strip nor the jolting cross cracks every 10 feet are from overweight bicycle riders. Roads in the US are in generally worse shape than those elsewhere. We not only need a more fair system to pay for them but we need to invest more in maintenance.

It’s not working nor is it a fair system. Let’s look at a system that will be much more fair based on actual road use and imposed risk.

The costs to build, maintain, and operate our road system need to be covered and should reflect use as accurately as possible. Someone who drives an electric car fueled from solar should pay their fair share. Today they do not. Fortunately technology allows us to charge accurately based on usage — a Wheelage Fee.

Three factors influence the cost that a person and their vehicle (or just a vehicle when autonomous delivery vehicles arrive) cause; weight, speed, and size[1]. 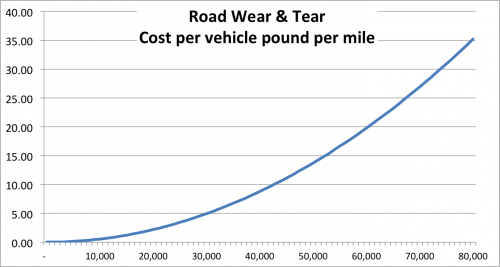 Next is Size. The larger your vehicle the more space it requires to drive and queue at junctions. This cost is about 1/5 cent per foot of length for a single lane vehicle.

Let’s put it all together.

It should be noted that this is quite small compared to the $0.45 to $1.30 per mile that AAA says our car costs us directly (fuel, tires, oil, maintenance, etc.).

A pedestrian costs about 2 cents for that 10 mile journey (and the cost of a pint after walking 10 miles).

People driving cars impose a high risk on those around them, particularly on roads that are poorly engineered (which is the case for most US roads and why we have the highest road fatality rates of all developed countries).

A transportation system comprised only of people walking and riding bicycles would have a fatality rate very near zero. Nearly every bicycle rider and pedestrian fatality in the US is caused by someone driving a car. People choosing to drive cars are imposing this risk on others.

Each year US drivers kill between 5,000 and 6,000 people walking and riding bicycles. Minnesota drivers kill about 50 each year and injure, often seriously and permanently, another 1,800. There is a high cost of choosing to drive. 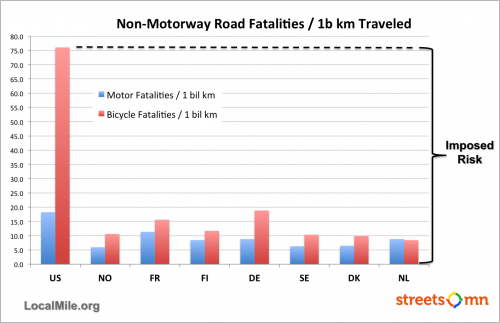 Drivers impose considerable risk on bicycle riders (and people walking). This imposed risk is much less in The Netherlands and other countries than in the US.

I’ll not attempt to put a cost on a life or a lifetime of a disability. We can though determine what it will cost to create protection to reduce the risk that drivers pose — about $0.06 per mile traveled. And since we know that greater speeds pose greater risk then we’ll adjust it for speed as above.

As more roads are brought up to spec this cost will fall off and eventually be zero for most drivers and trips.

And there you have it. Exactly what the newspaper writer asked for and what we should put in place.

[1] Number of axles, tires, tire design and tire sizes have an impact as well.

[2] $4.31 per mile damage to our streets, plus costs of fuel and maintenance and paying drivers and other transportation staff (about 5-10% of most school systems budget), extremely high levels of air pollution near schools from idling buses (and cars), decreased activity for students resulting in lower academic performance, greater obesity, and higher healthcare costs. Are school buses really a good idea? BTW, there are no school buses in The Netherlands who have among the healthiest population of all developed countries.

57 thoughts on “Yes, Bicycle Riders Should Pay Their Fair Share”