Did you know that you there are 23 bridges in Minneapolis and Saint Paul that allow you to walk or roll across the Mississippi River? This October, I spent a weekend walking across 19 of them and am in love with this way of experiencing the river and our twin cities. This route was so much fun that I plan on making this walk an annual tradition. For this walk, I used the Twitter hashtag #MissRiverBridgeWalk.

I started my walk at the corner of 42nd Avenue and Lyndale Avenue North. This makes for a great trailhead as you can fuel up and have one last bathroom break at Mykonos Coffee & Grill before venturing downstream. 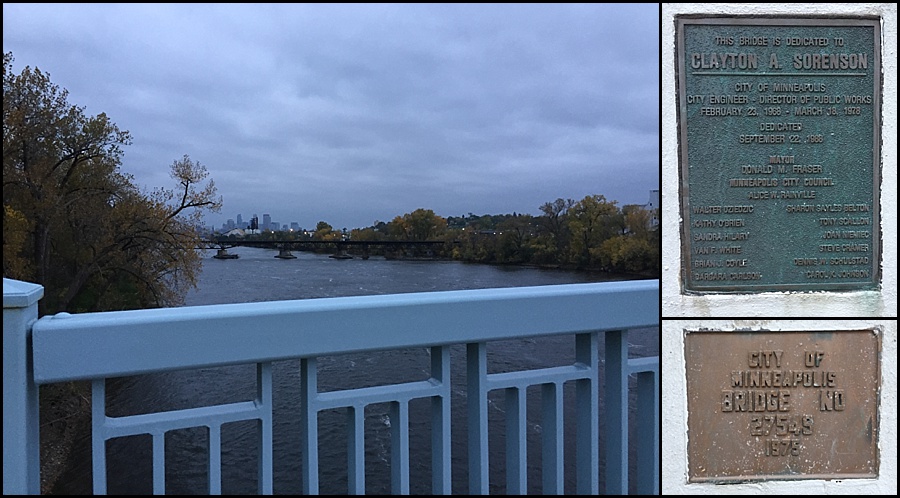 Built in 1977, Camden Bridge connects 42nd Avenue N and 37th Avenue NE. Its railings and girder are painted a distinctive powder blue. A dedication plaque informed me that in 1988 Camden Bridge was dedicated to a former Minneapolis City Engineer and Director of Public Works, Clayton A. Sorenson (1968-78). Before this walk, I didn’t realize that Minneapolis has a custom of dedicating Public Works structures and buildings to past City Engineers.

Learn more about the Camden Bridge

Route note: At Saint Anthony Parkway, I had to trade the beauty of the riverbank for Marshall Street NE. A highlight of this stretch of the walk was time spent in Marshall Terrace Park. A wood staircase led me to the water where I could take photos of the next bridge, Lowry Avenue Bridge. 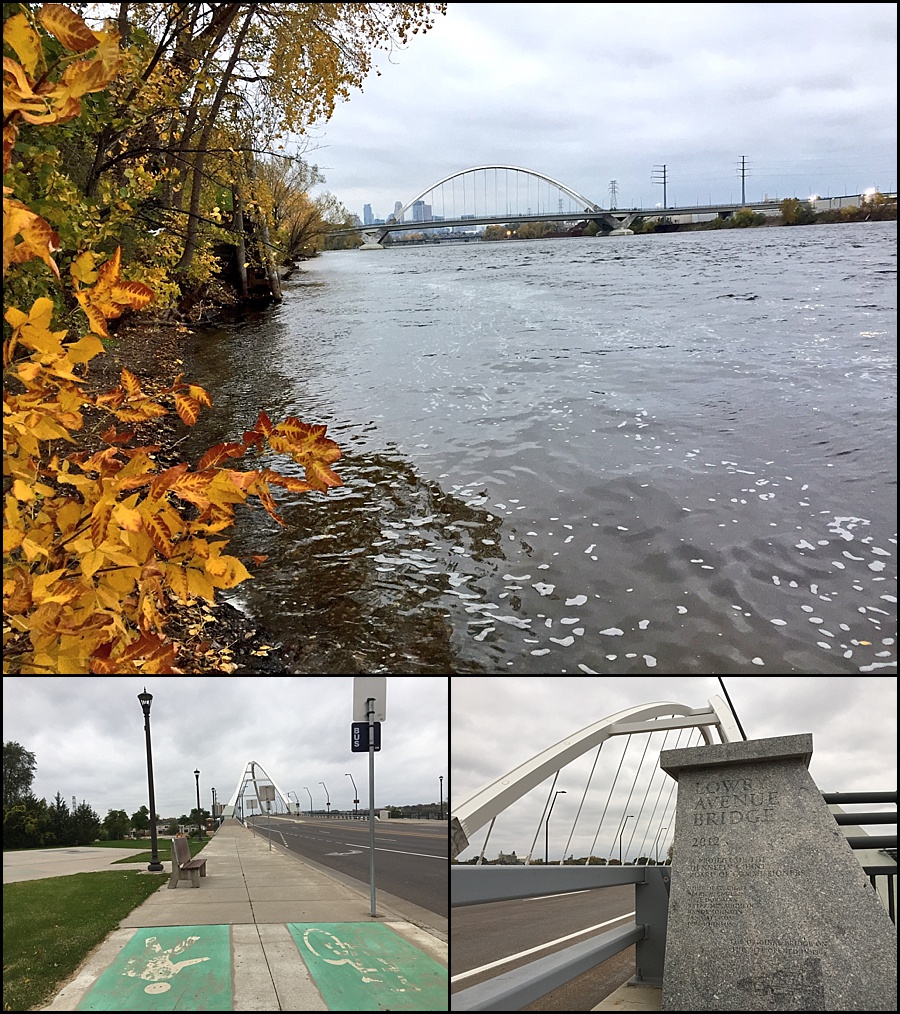 One of the new kids on the block, Lowry Avenue Bridge opened in 2012. The timing of my walk meant I missed out on the illumination of the arches of the bridge. The default color is blue but organizations may apply for special lighting.

Route note: Looking back at my route, I wish I would have crossed Lowry twice so I could have walked along trails on the eastern side of the river. 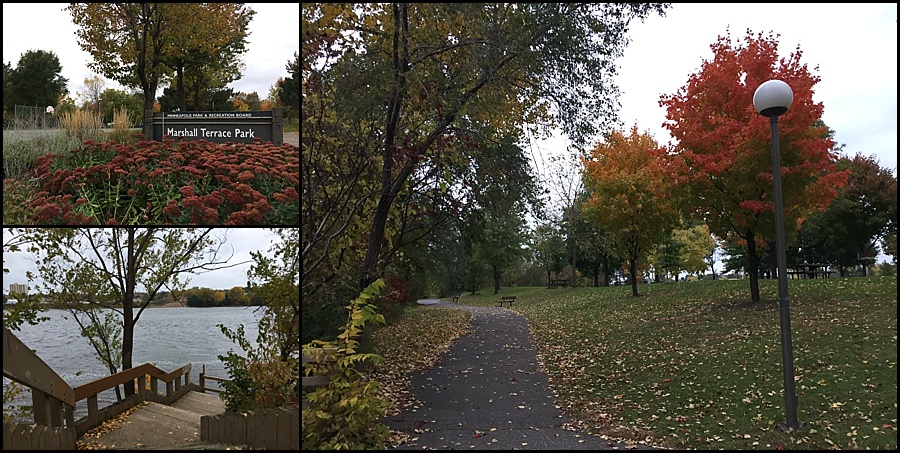 Opened in 1987, Broadway Avenue Bridge is no frills. Crossing from the west to east, I did enjoy the view of the historic Grain Belt Brewery complex.

Route note: Once I crossed the bridge to the east side of the river, I couldn’t figure out how to access the trail because of Graco. Instead, I walked on Sibley Street NE until I reached the next bridge, Plymouth Avenue Bridge. How does one access the trail from Broadway Avenue? 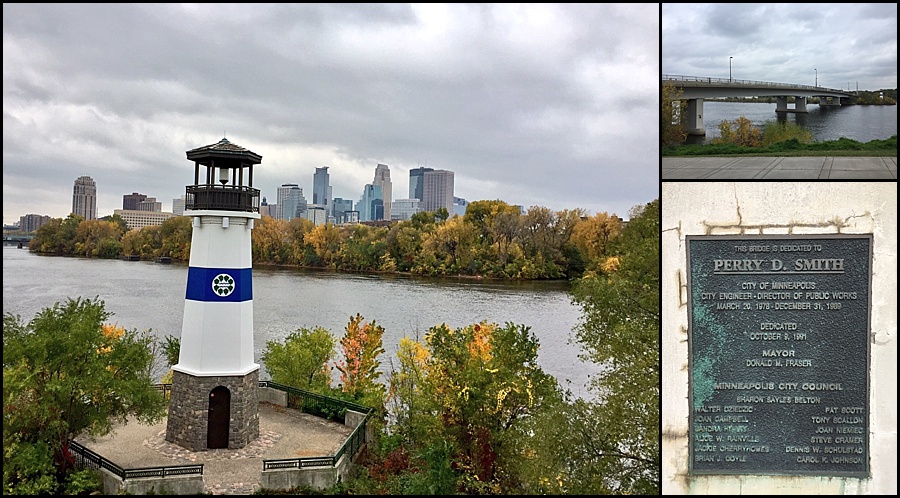 Route note: I walked along the west side of the river and decided to skip crossing two bridges: Nicollet/Boom Island Bridge (scheduled for repair summer 2017) and First Avenue. 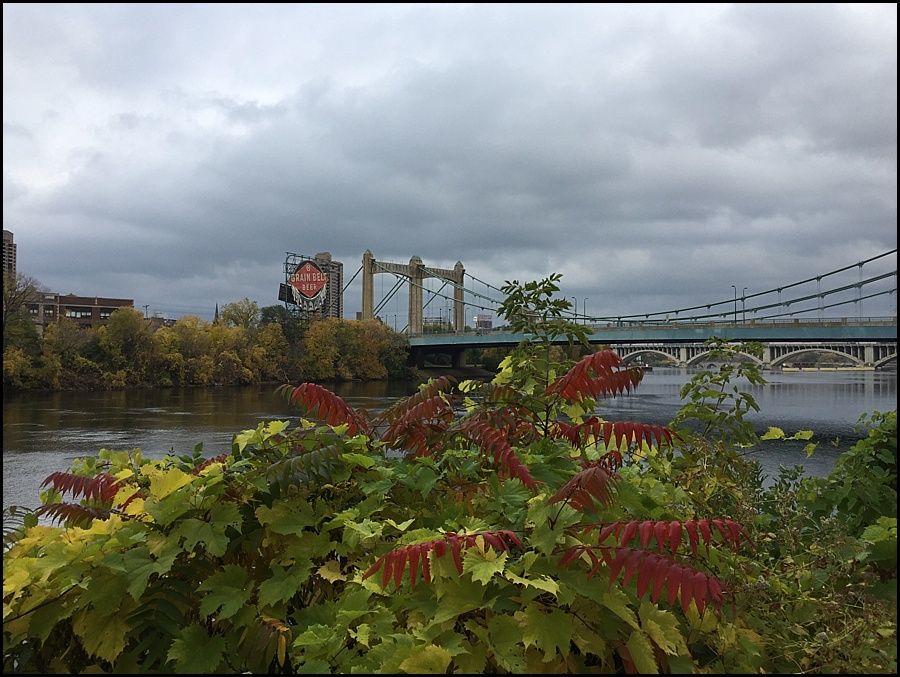 People crossing Hennepin bridge, the bridge plate, and decorative details of the bridge.

The first bridge to cross the Mississippi River was where today’s Father Louis Hennepin Bridge stands. Opened in 1990, this suspension bridge is a popular subject for professional and amateur photographers.

The beautiful truss of the Merriam Street Bridge was originally built in 1887 by King Iron Bridge Company and was part of the Broadway Avenue Bridge. It was opened in 1987 and a great fit for Nicollet Island.

Route note: After crossing the Merriam Street Bridge, I walked along Main Street until I reached the set of winding stairs to take me to the Third Avenue Bridge. This would have been a good point in the walk for a break since Main Street has several cafes. 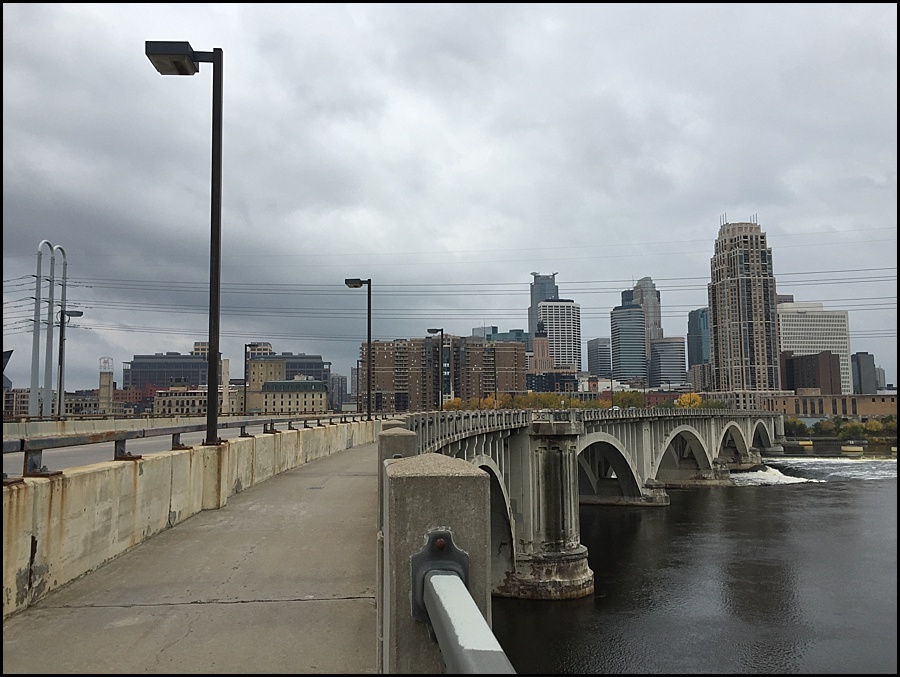 The view from the west side of Third Avenue Bridge

Originally known as the St. Anthony Falls Bridge, this bridge connects Third Avenue on the south end and Central Avenue on the north end. I like the curve in the Third Avenue Bridge. The west side offers a great view of St Anthony Falls. Under the north end of the bridge, you can watch people learn how to use Segways before they venture off on the Magical History Tour. 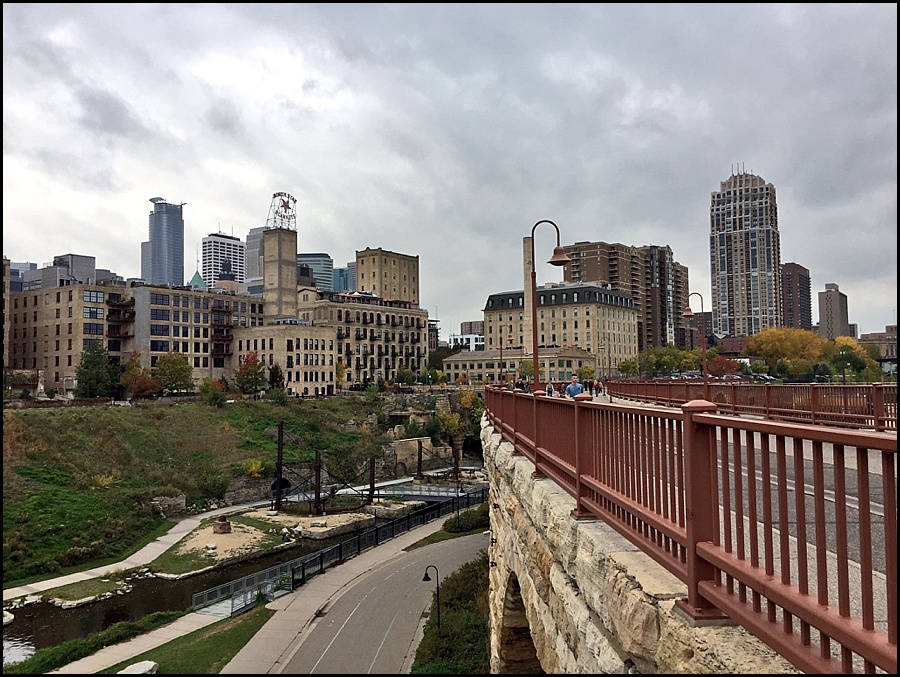 View of the Minneapolis skyline from St. Anthony Bridge

I think of the Stone Arch Bridge as the heart of Minneapolis. It is used for walking, rolling, sightseeing and memory making. I love spending time on and around this beautiful arched bridge.

Route note: After crossing Stone Arch Bridge, I walked a couple of blocks north to 2nd Avenue SE to make accessing the next bridge easier. Where 2nd Avenue passes under I-35W Bridge, there are recycled glass tiles made by students and family members of the bridge’s construction workers. This walking tour by John A. Weeks III is a way to view the I-35W Bridge since it is not accessible for walking and biking.

The high of crossing the beautiful Stone Arch Bridge took a deep dive when I reached the 10th Avenue Bridge which is one of my least favorites.

Route note: After crossing 10th Avenue Bridge, it can be a little confusing on how to proceed. It’s best to turn around to walk north and make your way to the Bluff Street Bikeway.

Built in 1922 for Northern Pacific, Bridge #9 was reopened in 1999 for pedestrians and cyclists. It is one of two bridges on the University of Minnesota campus that provides a car-free stroll or roll. I walk on this bridge often as part of a lunch break loop. 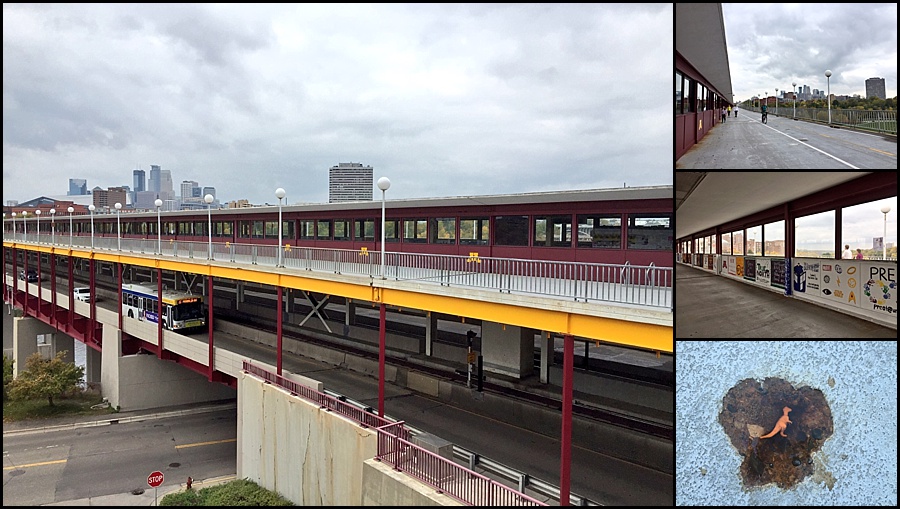 Washington Avenue Bridge is another one of my favorite bridges to cross. Since it connects the East Bank and West Bank campuses at the University of Minnesota, the upper deck is heavily trafficked by walkers, runners, cyclists (even the occasional unicycle!), and skateboarders. The lower deck of this bridge is used for motorized vehicles and the light rail. While I do not personally love walking through it, there is a covered walkway which is painted every year to promote student groups and activities at the University of Minnesota. It also received a modest facelift this year. If you’re an observant walker, you may notice a creative approach to filling holes in concrete. Look closely and you’ll find a variety of enshrined toys and treasures. The land on the west bank of the river near near the Washington Avenue Bridge has also been used for construction sites for other bridges such as the recent Franklin Avenue Bridge construction.

Route note: I chose to walk across the Washington Avenue Bridge twice but in the future I would instead cross once and walk along the trail on West River Parkway to the next bridge, Franklin Avenue.

I absolutely love the new Franklin Avenue Bridge. On the day it was re-opened, I walked to the bridge from work so I could join an informal group of fellow walkers and cyclists who gathered to celebrate. Unfortunately, on the day of this bridge walk I missed the Grand Opening celebration. I made up for it by crossing it twice and walking on both sides of the bridge. It was a great place to take in Mother Nature’s Autumn colors. 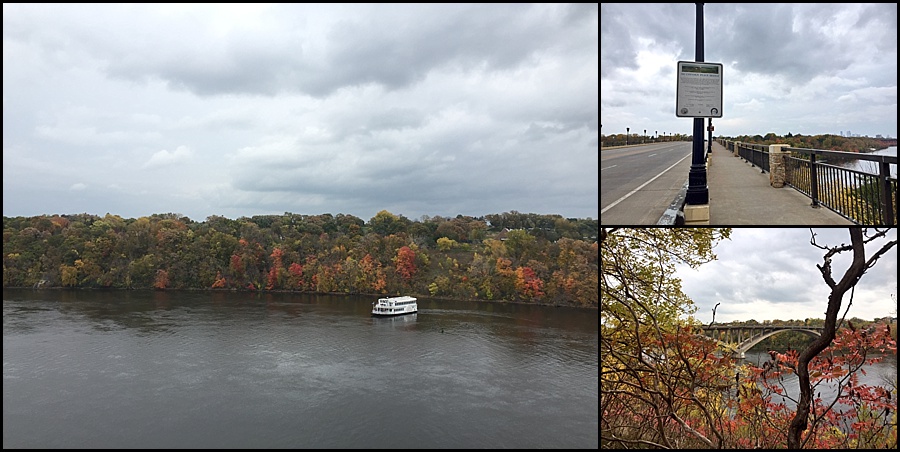 The Lake Street-Marshall Avenue Bridge is one of two bridges that connects the twin cities of Minneapolis and St. Paul. 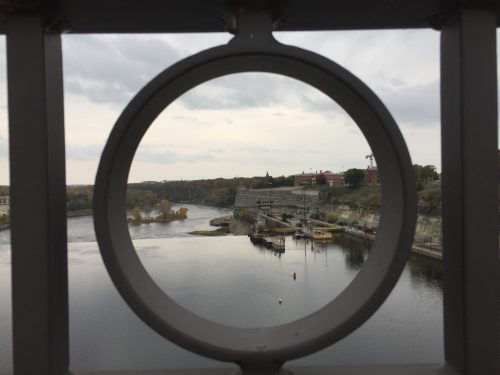 The Intercity Bridge, more commonly known as the Ford Parkway Bridge, is the other bridge that connects Minneapolis and St. Paul. It was built in 1925-27 and is on the National Register of Historic Places. I’ve crossed this bridge many times while I’m in the area enjoying Minnehaha Falls Park and St. Paul’s Highland Park neighborhood.

Learn more about the Intercity Bridge

My husband, Scott and I began our bridge walk at sunrise on the southernmost bridge in St. Paul.

Lafayette Bridge is one of the longest bridges along the Mississippi River in the Twin Cities. It offered a great place to watch the sunrise and view the downtown St. Paul skyline. 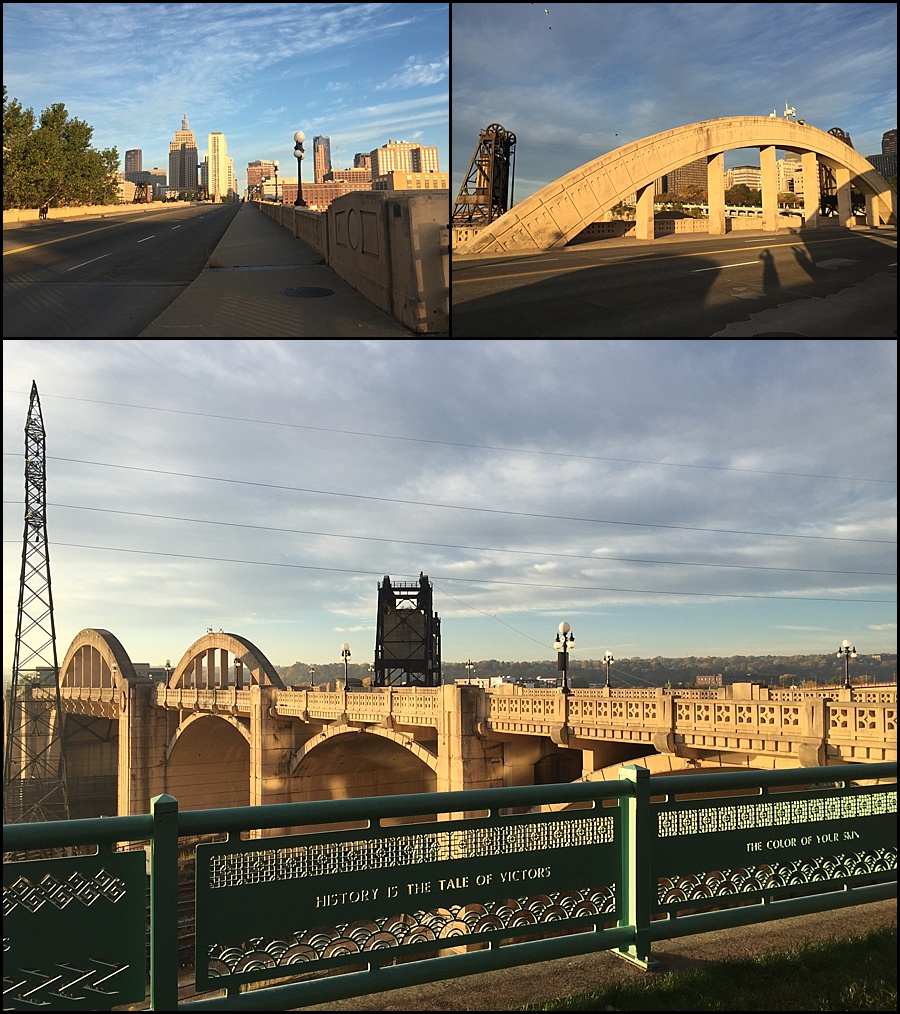 Robert Street Bridge with its concrete rainbow was built in 1924-26. On the north side of the bridge, you can visit the Saint Paul Cultural Garden. 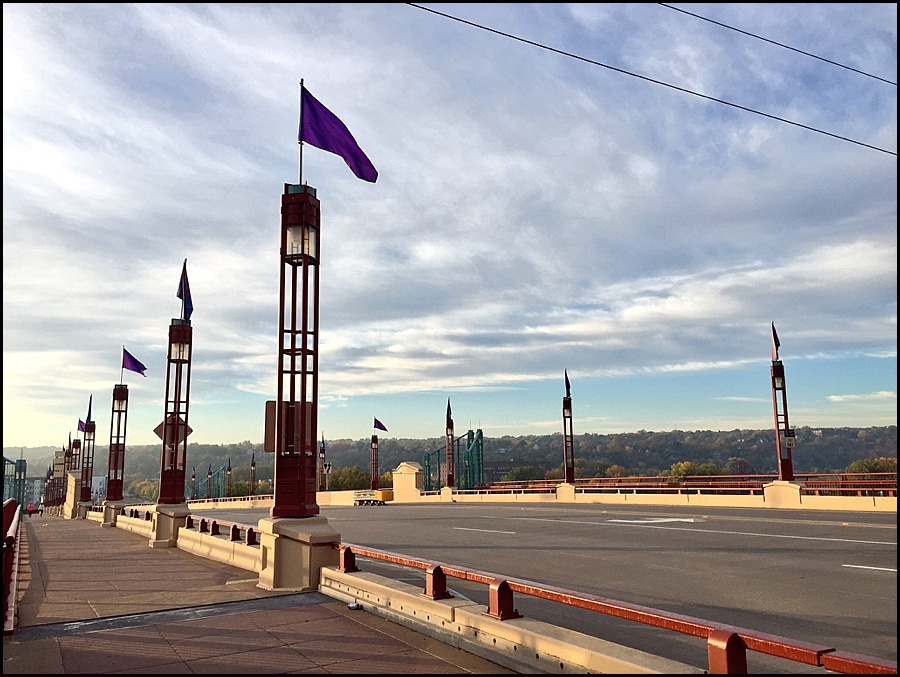 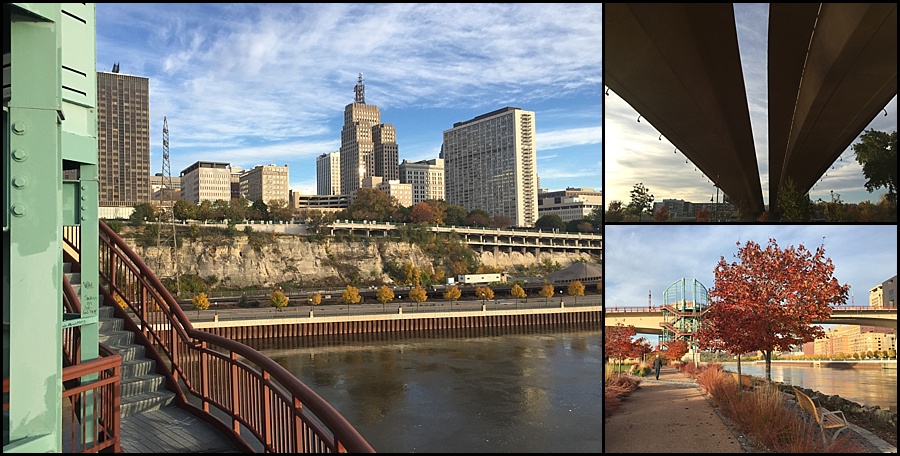 Wabasha Street Bridge is one of my favorites in the Twin Cities. The sidewalks are buffered from vehicle traffic and there are a number of observation decks to take in the river views. You can also take stairs down to Raspberry Island.
Learn more about Wabasha Street Bridge 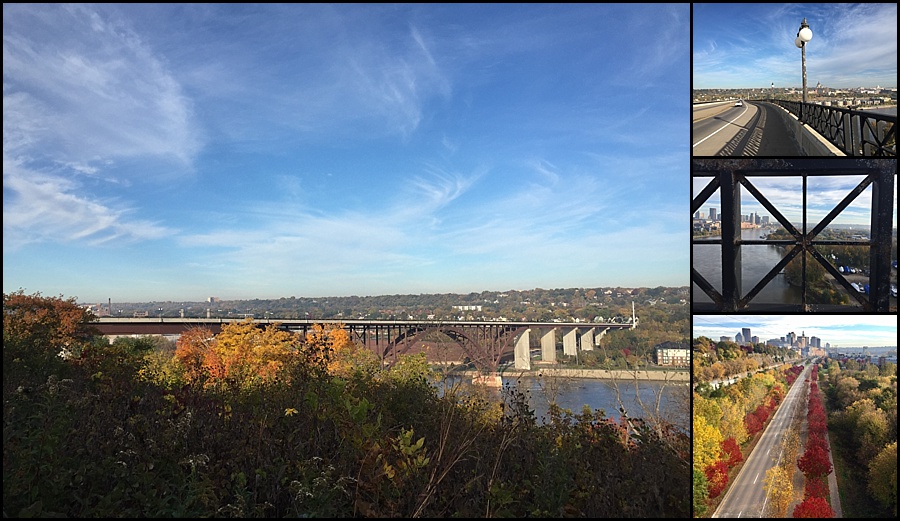 Built in 1987, the High Bridge offers great views of St. Paul and on this walk we were treated to some spectacular autumnal colors.

Route note: We didn’t want to back track to Wabasha in order to access the trail that runs along the river so we ended up walking away from the river and along 7th Street. When we were finally able to reconnect with the trail, it was along the Shepard Road. I will admit this is not a favorite trail of mine. There isn’t enough protection from the noise and speed of motorized traffic. In hindsight I wish we would have crossed the High Bridge twice so that we could have walked through Lillydale/Harriet Island Regional Park. 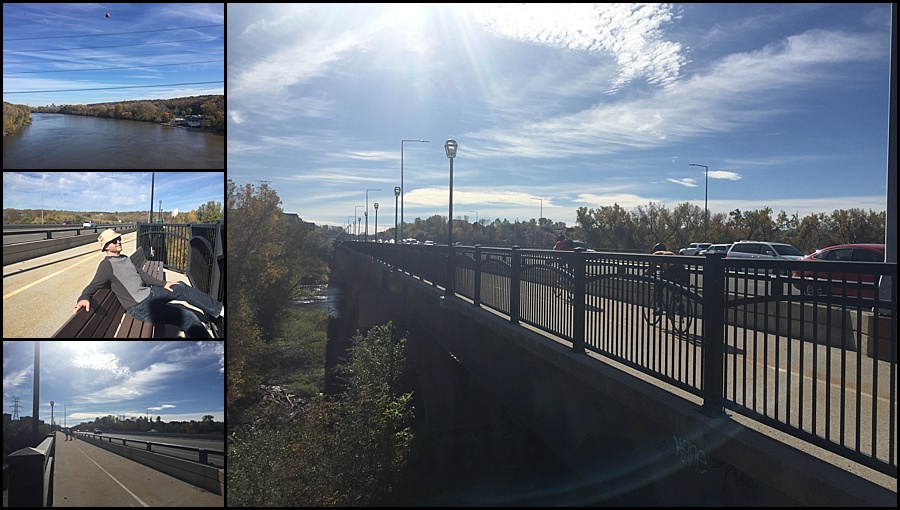 Before planning this bridge walk, I incorrectly assumed that we wouldn’t be able to cross I-35E because pedestrians and cyclists are not allowed on I-35W. We ended up crossing this bridge twice and there were far more people walking, running, and biking than I would have ever imagined.

Route note: We were getting mixed reports on whether or not we’d be able to cross Fort Road Bridge (Highway 5) because at the time it was under construction. Therefore we decided to cross I-35E twice and end the first annual Mississippi River Bridge Walk. Next year I will cross the bridges I had to miss this year.

I’d like to improve this route for future weekend walks. Where would you start and end each day? Without a lot of back tracking, how can I plan this walk so that most of the time is spent on trails near the Mississippi River? Where would you recommend taking breaks? What else would you change to make this a fun two-day walk in Minneapolis and Saint Paul?

1 thought on “Walking the Bridges of the Mississippi River”