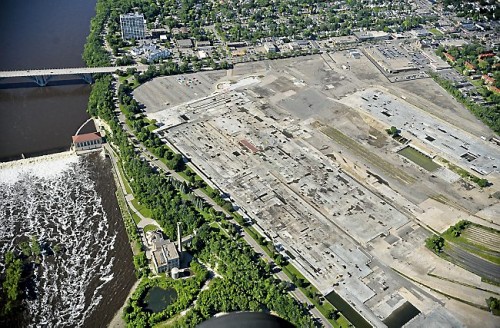 As the public forums churn on to test visions of how the former Ford Plant property might be developed, I find little evidence of complementary planning to alleviate the impact on the communities surrounding the Ford site.  At a recent gathering, participants questioned and clucked about the ingenious, elegant, sustainable, and green options envisioned in the draft plans.  Presenters exuded delight in this once-in-a-lifetime opportunity to plan and manage one of the larger housing and commercial development projects in the nation.  Others salivated over the increased tax revenues the project could generate.

Aside from the convivial innovation of holding the public meeting with an open-bar at the Summit Brewery, it was easy to see what all the excitement is about.  I frankly think that the development can be a good thing for Saint Paul, drawing upon the examples of other cities around the world we know, like Paris, with amenities and aesthetics in higher density habitations that preserve, enhance and celebrate life in community.  I love life in the city, and know that increased density is not incompatible with a rich and enjoyable lifestyle.

What concerns and frustrates me about the Ford site initiative to date is its focus on one piece of real estate.  The city is like an organism with many members, each affecting the experience and quality of life of the whole.  Missing is consideration of the impact this development will have on the lives of those whose homes border the development; in particular, residents of neighborhoods where I live along Cretin Avenue.  Any creative efforts to improve one neighborhood of the city should entail the responsibility to engage adjacent, adversely affected neighborhoods to reach equally creative solutions that maintain, if not enhance, the livability of their community.  The project should not be pronounced completed until we can all agree that this has happened.

Four thousand new housing units and supporting commercial, service and recreational development that engender a self-contained village are planned for the 135-acre site.  Commendable work has gone into reducing reliance on cars through planning to create walk and bikeways and mass transit options, but in the end, traffic will inevitably increase and be funneled through Cretin Avenue.  An increase of 200 cars per hour at peak morning and evening travel times is projected.  It could be higher, for a street that is already congested and at times difficult to cross safely during these same hours.  Assuming that there is no alternative to Cretin, it’s time to plan on mitigation measures to slow the traffic with things like stop signs, curb bump-outs, pedestrian cross-walk signals, maybe even speed bumps.  I’m not ready to lie down on the street to block traffic, but I could get there.  I appeal to Cretin Avenue neighborhood residents and the creative development planners to work together to explore and integrate every possible measure in the final plan to favor “joie de vivre” livability along this corridor, and a better Saint Paul for all.

6 thoughts on “In Defense of Livability on Cretin Avenue”