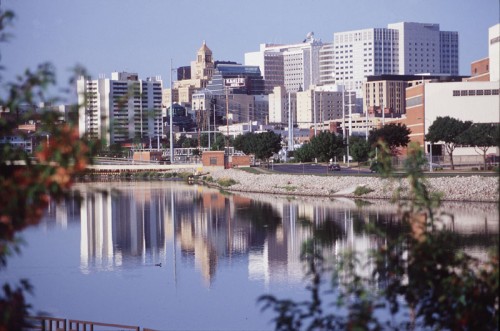 View of downtown Rochester on the Zumbro River

I would not have guessed that last year’s “9 Ideas” blog post would garner such attention.  The quickly assembled list was a no more than a combination of thoughts and ideas shared between friends and colleagues as well as examples derived from authors and practitioners from across the United States.  Yet the ideas spurred conversation.  Conversation about what to do.

We live in an fascinating time where ideas have merit, weight, and value.  Ideas can fail as often as they succeed, but they perpetuate nonetheless.  As they say, “nothing is stronger than idea whose time has come.”  At the same time, we are not having our most powerful voices initiate new ideas.  Sadly, in the race to see whose city building efforts are the most creative and innovative, we are still debating the best starter pistol to purchase.

This year, as two outstanding design advocacy organizations sunset, I am offering up 9 more ideas to continue the conversation.  I hope that the coming year will be one where our city leaders choose to act progressively to create change; instead of reacting to change as it occurs.  So here goes:

Bear with me, this may feel a bit technical.  The “street” as we refer to it is much more than the paved roadway where vehicles drive.  A street consists of the sidewalks on either side, parking lanes, boulevards trees, bike racks, cafe seating, and landscaped medians.  The decision to remove a total of ten feet of road from the authority of the vehicle and deposit it at the feet of the pedestrian would dramatically improve the safety and overall comfort of the public realm.  With this newly gifted space, we as human beings could decide where we would prefer the extra space to be allocated; not the automobile.  When you design a street for cars and traffic, you get just that.  It is time to design streets for people.

If you own a coffee shop, or a retail store, or a restaurant downtown, you most likely have some on-street parking spaces out front.  Would you rather have one car parked in front of your front door for hours at a time, or have a beautifully designed seating area that could accommodate 5-10 people?  Don’t worry, there isn’t a right answer to this question.  The answer depends on your business and your needs.  So why not allow each business to have a say in determining what that space should be in front of their shop?  A parklet isn’t permanent, so why not test something out to see if it increases your customer base?  Creating an avenue to increase the amount of space allocated to the pedestrian (see above) would allow the streets to organically evolve and adapt to the change in season, the change in commerce, and future changes in technologies.

Today, the need to have a city located near a river is virtually non-existent.  No longer are they vital sources of commerce or protection.  However, cities that remain close to rivers, lakes, and oceans are enriched by the public’s ability to use water for recreation, leisure and environmental conservation.  Despite repeated recommendations, Rochester has not embraced the natural resource that runs through its downtown.  In fact, it’s only physical treatment has been through the utilitarian method of flood control that turned the natural resource into an austere canal.  Indeed, it has the potential to be so much more.  If we were to hold a city-wide arts competition to gather ideas for what can be done to enliven or enrich the concrete retaining walls, we could shift the paradigm from one of avoidance to one of embracing.  Who better than artists to visualize the future of an overlooked and forlorn element of our built environment.

A tremendous amount of time and energy went into the creation of the draft DMC District Design Guidelines.  This document not only provides clear visuals for urban design principles and methods to evaluate success, it also synthesizes numerous previous design-focused documents such as the Urban Village Overlay Design Guidelines, the Rochester Downtown Master Plan, and of course the DMC Development Plan.  The problem with design guidelines is that they are meaningless if nobody enforces them.  Within these guidelines is provided an evaluation checklist at the end of the document to tee up the process of administering this great design policy framework.  So put a review body in charge, create a system that incentivizes following the rules, and let’s stop talking about becoming a great downtown environment and actually start ensuring that we become one.

5 | CREATE A PRECEDENT FOR LEED BUILDINGS

A number of years ago I was involved in one of Rochester’s first multi-family housing developments to seek LEED for Homes certification.  During the city review process, as we were talking about the required fees, we made the request to have the water and sewer fees reduced or waived since the project required a significant reduction in overall water consumption (per the LEED standards).  Water usage is one of the easiest elements of the design to quantify a reduction and since we have so greatly improved the demand on city services, we thought the request had merit.  The response was that they, “did not want to create a precedent for that.”  Why not?  Creating a precedent to pursue greater energy efficiency, water usage reductions, and smarter material resourcing would only stand to benefit the city long term.  It is time we aspire to have the healthiest building stock in America if we are truly seeking to become America’s City for Health.

I swear….if one more multi-family housing project comes forward with the name “Someplace on First” or “Address on Third” I am going to lose it.  It is only deteriorating our collective hippocampus to continue to name these buildings in such an inane manner.  We live in a city with four quadrants–each using the same avenue and street naming conventions.  But did you know that it hasn’t always been that way?  From the historic homes on College Street (4th Street) to my own home on Genessee, we used a more specific and intentional manner to name our streets.  When I was young my hometown city celebrated it’s sesquicentennial by installing on it’s street signs (in a different color, right below the top green ones) the names of the original platted streets.  Rochester could do the same thing.  Installing historic street names and resurrecting this long lost part of our history will aid us long term in creating more memorable places.

A number of years ago I was part of a group tasked with looking to simplify and standardize the parking signage in the core neighborhoods.  We found in some areas nine different signs; each describing a particular nuance.  Approached as a design problem, the various behaviors that you are trying to prohibit could be better solved with an intentional strategy.  If you don’t want Mayo employees parking all day on a residential street, then prohibit parking for two hour windows at each shift change.  If you want to provide on-street parking for active ground floor businesses, then provide meters or 30-60 minute maximums.  Having a “No Parking 8am to 5pm Mon-Fri” sign right a block away from a “No Parking 8am to 6pm Mon-Sat” sign sends a message that we actually have no idea how to control parking.

Not all areas in Rochester are created the same.  Low density in Kutzky Park is not the same as low density in Merrihills.  The zoning ordinance that exists today is broken beyond comprehension and should simply be thrown away.  Whether you believe in form-based codes or use-based codes, there needs to be a new zoning map that recognizes the different parts of our city by the neighborhood patterns in which they were constructed (e.g. Traditional Neighborhoods, Mid-Century Neighborhoods, Modern Era Neighborhoods, etc.).  By combining areas in this fashion, it would greatly simplify the zoning definitions as there are more similarities in development pattern than in geography.  This tiered system, in conjunction with a form-based code, would allow us to build more productive places and stop fighting against the outdated rules.

Tired of fighting a new skyway battle every time a new project is proposed?  Establish a master plan for where the skyways and subways will go and where they won’t go.  And here is the most important part: enforce it.  A plan is useless without follow through.  A game is not fair if you keep making new rules along the way.  I am not 100% opposed to skyways.  I believe there is a place and rationale for skyways and subways.  But I also believe they are starting to act like exits on a highway with developers claiming they need an interchange in order to keep their business afloat.  If we develop places that are that susceptible to failure (as we did during the era of cloverleaf proliferation) then we deserve the pain that we experience.