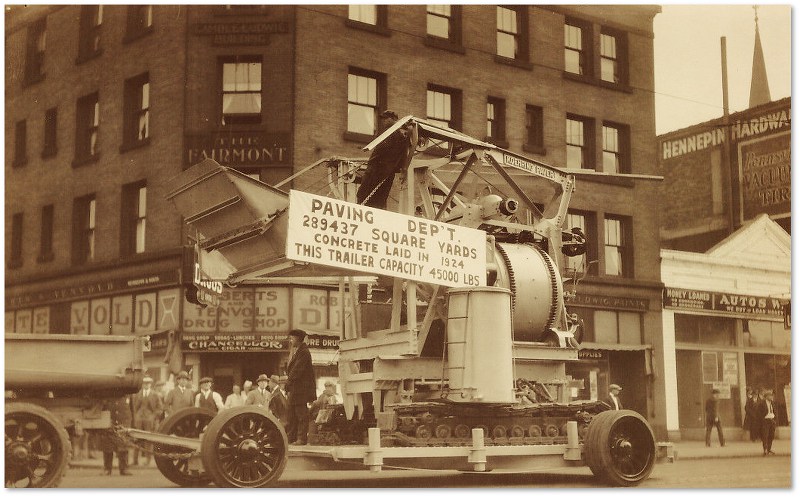 In 1893, Court Avenue in Bellefontaine, Ohio became the first American street paved with concrete. George Bartholemew is still celebrated for his “artificial stone” pavement. Bartholemew convinced the Bellefontaine City Council to try it around the Logan County Court House by posting a bond that guaranteed the pavement would last at least five years. The street was still there. In 1991, the city closed the avenue to motor vehicles and erected a statue of Bartholemew in the middle of the road. In 1909, Woodward Avenue in Detroit, Michigan became the first mile of concrete pavement in the United States.

There were probably fewer than 10,000 cars on the road in 1923, but when the state of Arkansas put down 24 miles of concrete near Pine Bluff, the road became tourist attraction. Motorists loaded their automobiles on to flat cars and came by railroad to let loose. On a smooth, rutless highway the old roadsters could safely reach speeds of 50 miles-per-hour and more!

Rolling by the Lumber Exchange Building…

In 1924, the City of Minneapolis Paving Department laid 289,437 square yards of concrete using trailers capable of haling 45,000 pounds. Roadways made of concrete can last decades, but Minneapolis doesn’t build concrete streets anymore. Concrete is harder and more durable, but asphalt is cheaper. That being said, Minneapolis has been trying to hang on to the concrete streets it already and city officials have employed a variety of renovation and repair techniques in the Victory and Nokomis neighborhoods.