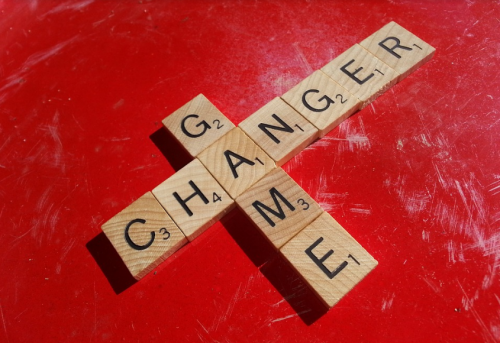 The summer is here and this usually means that I end up writing a streets.mn article that is light and airy like a white wine.  So without further adieu, I present to you a listicle. Eat your heart out, Buzzfeed.

Here are the three game changing streets projects you should research, comment upon, and dream about as the summer blue skies start to produce lackadaisical cumulonimbus clouds. 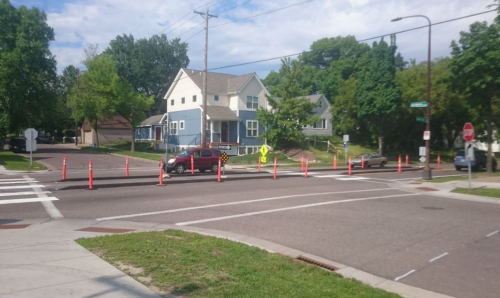 It is no secret that I love Saint Paul’s East Side.  I lived there for many years and wrote, produced, and released an entire concept record about the area.  I find Payne-Phalen especially to be a place where poetry disregards the written page and prefers to live in the narratives of citizens.  There are literal shamans that wander Bruce Vento talking to birds.  The dream of the American middle class roared proudly through the 50s and 60s.  The Hold Steady even wrote a faux Replacements tune about Payne Avenue called Sweet Payne.

But even as I “dream of a unified scene” for the East Side, there is an asphalt divider that cuts Payne-Phalen in half.  Maryland Avenue is terrifying to cross as a pedestrian as it has 4 lanes of travel where automobile drivers routinely speed up to 50 miles per hour.  It has claimed the lives of citizens in the neighborhood and will continue to do so if left in the same design. 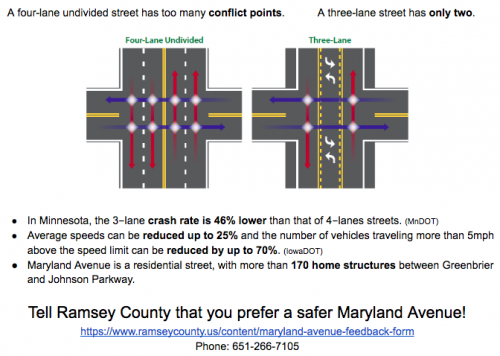 Source: flyer created by neighborhood activist Eric Saathoff in support of the 4-3 conversion.

Currently, Ramsey County is running a test “road diet” where the 4 lane street has cones on it to make it a 3 lanes.  Bill Lindeke isn’t being hyperbolic when he describes this project as the most important projects in a generation.  Not only could a 3 lane design save lives, but if this test is well received it could set a precedent with the county that poorer neighborhoods deserve more than being just a blurry image out of the window of a speeding motorist.

You may submit comments on the project here, so please, go drive, bike, and walk along Maryland Avenue.  Try some delicious Pho while you are there.  Then send your thoughts about the 4-3 Conversion to Ramsey County. 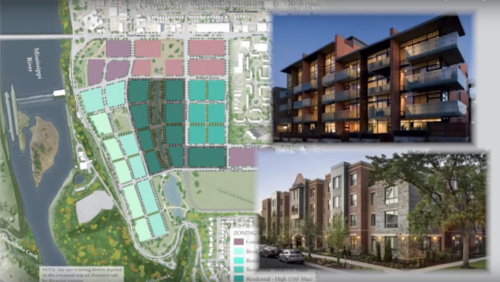 Just across the river from Minneapolis in Saint Paul’s Highland neighborhood is a gigantic empty hole where the Ford Ranger Factory once stood.  To a regular person biking by, this may look like just big empty lot that still hasn’t been redeveloped.  However, to urbanists, politicians, and many neighborhood residents, this dirty hole is the literal future of the neighborhood.  Saint Paul has branded it “A 21st Century Community”  and the plans are to create a mixed use space that supports walking, biking, and transit while being an economic boon to the community.

The creation of these plans has fostered a debate in Highland around the concept of “density.”  On one hand, a newer generation of residents wants the city to make intelligent plans to accommodate the influx of young people that want to move to and invest in an area like Highland.

On the other hand, a handful of long time residents of Highland would prefer that the neighborhood continue it’s longstanding tradition of serving the existing interests of current land owners of low density parcels and not incorporate new developments that require a slight change in density.

There has been extensive writing on this topic on streets.mn already, much of it revolving around the concept of “neighborhood character” and it is, in my opinion, worth reading.

It’s an interesting debate and both sides have valid (and plenty of invalid) points.  Once you’ve done your research and separated the plentiful chaff from the wheat, you can join your neighbors in the debate.

Sustain Ward 3  is a YIMBY group that is predominantly in favor of the Highland redevelopment and are organizing to incorporate this project into the community in a strategic way.

Neighbors for a Livable Saint Paul is a NIMBY group that opposes any buildings higher than 3 stories, opposes the use of TIF public financing for the project, and “demand(s) low traffic increases on surrounding streets all the way to freeway access points.”  They support little league baseball.

The City of Saint Paul has a fantastic outreach site set up with info on the project and when you have done your research I encourage you to give the city your official stance.

Give your comments to the City here. 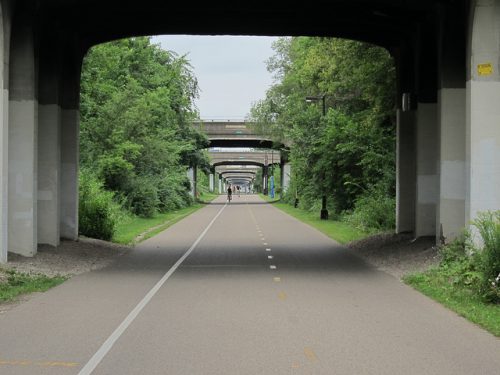 As is probably obvious by now, I stumbled into discussing urbanism not through an urban design degree but rather because I was once a poor music student and needed to bike commute to finish my music degree.  While this makes me a decidedly non-technical voice here at streets.mn, I do think it gives me a unique perspective on city design.

Because of my art background I am adamantly and without pause in favor of dreaming big, being imaginative, and planning for a city that lives up to the best dreams we can concoct.  It was Miles Davis that once said “Don’t play what’s there, play what’s not there” and I believe this jazz idiom is equally at home in describing our future city.

“What’s not there” is a Greenway connection from Minneapolis to Saint Paul.  The Greenway “bike highway” ends in my neighborhood of Longfellow and does not connect over the Mississippi into Saint Paul.  Although both Andy Singer  and Alex Schieferdecker have explained elegantly why this seemingly simple project presents a gaggle of legal, political, and engineering problems, I believe that this seemingly impossible project is worth pursuing and incredibly feasible. 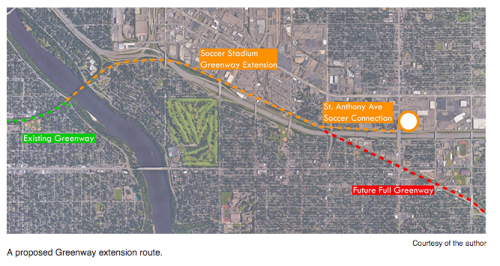 Map from Alex Schieferdecker’s MINNPost piece “The Midtown Greenway is the missing piece of the St. Paul soccer stadium plan.”

I am not alone in this dream and in fact the Union Park Community Council in Saint Paul is holding a meeting from 7:00-8:00 pm on Wednesday, June 7 at 1860 University Avenue to discuss how best to support the project.  This for me is the “meeting you can’t afford to miss” of the summer and I recommend you go.

I anticipate that strategic partnerships between St Paul and Minneapolis community councils will be necessary in order to bolster the political will necessary to make this happen.  In laymen’s speak, I believe that real lasting community development comes when we organize from the ground up to make our cities everything we dreamed.

Let’s get out there and be like Miles. Let’s play the notes that aren’t there and make our cities a creative expression of our collective humanity as citizens.