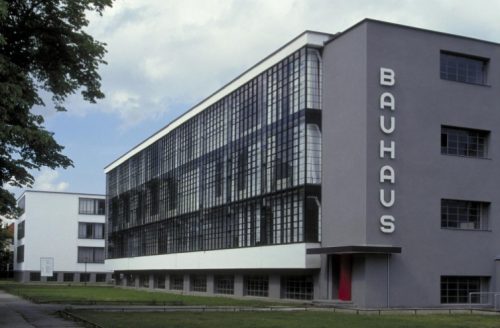 It is with great joy that I have seen some of the authors here at streets.mn start to open up discussion on the meaning of “neighborhood character.”  Answering the question about neighborhood character is difficult to do quantitatively, as it is hard to measure what culture is and how it is changing.

As I started researching the history of national and neighborhood character for this article, a natural dichotomy arose.  David E. Stannard expresses this duality especially well in the first sentence of “American Historians and the Idea of National Character: Some Problems and Prospects” when he says,

“Historians have traditionally handled the idea of national character in a curious manner: on the one hand, most historians take a dim view of any serious attempts to generalize about the “character” of a nation; on the other hand most of them constantly do it.”

I hold this duality in mind as I proceed knowing full well that I am discussing not measurable things like zoning, but rather interpretable things like culture.  This essay will be structured then around three questions instead of three statements.  Although I have my own opinions on how these questions are to be answered, it is my hope that my thoughts and opinions stated here are the beginning of discourse instead of the expression of a manifesto.

Are we Constructing Buildings that Express the History of our Cities?

Minneapolis and Saint Paul are two cities that grew, like many midwestern cities, out of the industrial revolution.  We are relatively young and definitely American, so our architectural legacy is a bit of a smorgasbord of design.  We have gothic churches,  elegant Victorian homes,  and a great deal of newly built Bauhaus style apartments.

Bauhaus apartments are defined by high contrast, sharp lines, and a steady percussive beat of individual balconies. Good examples of these new buildings are 700 Washington, Wahu, Flux, and Walkway.  The Walkway will be important later when we discuss the goals of design.

Bauhaus to me is an especially interesting architectural trend for our cities, if only for its frequency of usage.  In terms of architecture, it’s very very new.  And this newness seems to be especially loved by new urbanists.  It’s like Bauhaus is putting the umlaut into Nü Urbanism.

Historically speaking, I have my doubts that our obsession with new build Bauhaus style truly expresses the cultural diversity of the Twin Cities, so let’s let the interpretation of history percolate while we talk about the design goals of our buildings.

Are the Design Goals of our Buildings Congruent with our goals for our Culture?

Bauhaus is all about design.  In fact, Walter Gropius famously stated in the manifesto of Bauhaus that “the goal of all artistic activity is architecture.”

You can see this especially well in the dormitory that he designed.  The perfect rhythmic frequency of the private individual balconies places humans in a grid like they are circles placed onto the landscape by some sentient post-modern dot matrix printer.

Locally speaking, The Walkway Apartments in Uptown are a good example of the architecture, namely in how this building splits individuals so regularly into private spaces intentionally creating separation in the urban space.  This privatization of space is to many problematic and emblematic of the community collapse that Robert Putnam talks about in “Bowling Alone: The Collapse and Revival of American Community.”

Tim Gihring expresses this elegantly in his Minnesota Monthly article on the Luxury Apartment boom by quoting one of the tag lines for the Walkway: “Private means ‘privileged.’” This privilege is described as  “an amenity not everyone appreciates—especially those on the outside.”

As an individual, I agree with him.  When I pass by one of these buildings, it feels as if I am being excluded from society.  The underground parking, elevators, and privatized courtyards seem to take the commons and give them to a members-only culture.  The mathematical lines and large flat surfaces pose a physical challenge, too, as they reflect wind and sound to make it literally harder to bike or walk next to one of these buildings. 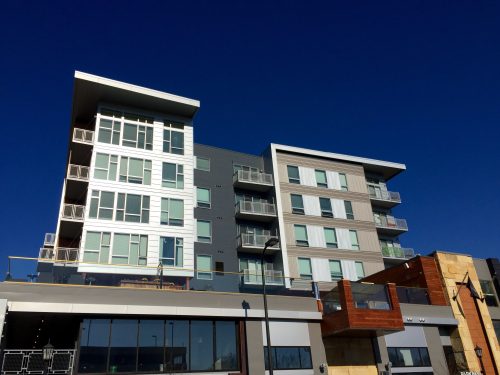 It seems every time I bike across the 10th Avenue Bridge, a mighty gust of wind reflects off of one of these shiny odes to modernism and makes my metaphorical struggle to hear or walk towards my fellow humans more difficult.

And this design idea is built into the idea of Bauhaus and written into the core of it’s ideology.  Alfred Barr states “most students should face the fact that their future should be involved primarily with industry and mass production rather than with individual craftsmanship,” and Gropius himself said “The Bauhaus does not pretend to be a crafts school; contact with industry is consciously sought…the old craft workshops will develop into industrial laboratories: from their experimentation will evolve standards for industrial production…The teaching of a craft is meant to prepare for designing for mass production. Starting with the simplest tools and least complicated jobs, he gradually acquires ability to master more intricate problems and to work with machinery, while at the same time he keeps in touch with the entire process of production from start to finish.”

Bauhaus by it’s very definition stands against history and in favor of modernism by saying “the student architect or designer should be offered no refuge in the past.”  This as an urbanist ideology was problematic in the 40s and in my opinion, it’s still problematic now.  If we as urbanists are to act in congruence with a desire to built cities around the people that inhabit them instead of designing cities that people can be placed in like dots, then we should treat the architectural style of Bauhaus much more gingerly than we are currently.  This leads me to my final question.

Are we Building our Urban Environments for People?

Jane Jacobs (y’all had to have seen Jane Jacobs coming in the third act, right?)  famously stated that “Cities have the capability of providing something for everybody, only because, and only when, they are created by everybody.  This inclusiveness stands in harsh contrast to the stark measured separation expressed in Gropius’s architecture.

“Under the seeming disorder of the old city, wherever the old city is working successfully, is a marvelous order for maintaining the safety of the streets and the freedom of the city. It is a complex order. Its essence is intricacy of sidewalk use, bringing with it a constant succession of eyes. This order is all composed of movement and change, and although it is life, not art, we may fancifully call it the art form of the city and liken it to the dance — not to a simple-minded precision dance with everyone kicking up at the same time, twirling in unison and bowing off en masse, but to an intricate ballet in which the individual dancers and ensembles all have distinctive parts which miraculously reinforce each other and compose an orderly whole. The ballet of the good city sidewalk never repeats itself from place to place, and in any once place is always replete with new improvisations.”

Personally, (thanks to Bill Lindeke for the clip)  I think this “sidewalk ballet” is aptly and visually described well by Spike Lee in his film “Do the Right Thing.”  I won’t get into the cultural necessity of this film even though I consider it a must see for anyone who rides a bike, buys a house, or says the word “gentrification” at least once a week.  That said, there’s something beautiful about it.   The community of individuals, albeit frustrated on the hottest day of the year, is forced by design to interact with each other.  They sit on the porches of brownstones, argue about basketball, and accidentally run over dope white shoes with dirty bike tires. 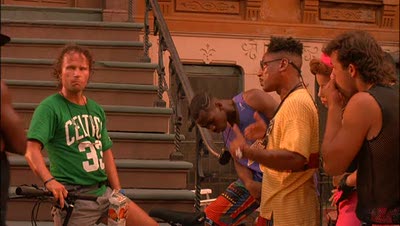 It’s kind of a mess, honestly, and I can see how people inside one of Walter Gropius’s dots might feel safer being separated from that mess.  But it’s an honest mess.  And it’s an inclusive mess.  And it’s diversity of thought and inclusion is in pursuit of Jane Jacobs goal to provide for everyone by letting everyone be included.  It’s kind of beautiful, really, and like many of my favorite living documents and ideas, this ballet evolves and reinterprets itself constantly as it weaves future plans into the present and the present into history.

So when we have an opportunity to create something new,  perhaps we should keep the architectural style and ideas of our community in mind.  Our cities are diverse, fecund, evolving places.  So instead of hammering out our individual living spaces into mathematical perfection that excludes history and creates a defined “other” like Bauhaus, let’s make a mess like Jane Jacobs does.

Let’s make porches and public spaces where people can fight about basketball.  Instead of putting up cameras around harsh ninety degree angles to facilitate security, let’s encourage people to share their community and put “eyes on the street.”  Let’s build for people in order that people may interact and grow based on having their society be social.

The famous American park designer Frederick Olmsted said that in order to design a good park, you had to tap into the “genius of a place.”  He theorized that places have intrinsic spiritual qualities that good designers must figure it out in order to best express the spirit in their design.

We have this same opportunity when we build our cities.  Our cities are a collection of our people and because of that, our “neighborhood character” is a collection of our shared values.  Instead of building places that unwittingly separate people from each other, let’s truly listen to our community values as we create our designs intentionally with human fluidity as to make our buildings perpetuate a healthy culture.