Here’s a chart from the must-read City Observatory website, written by Joe Cortright. This one has a great chart that shows the link between “distance from city center” and poverty rates. The data comes from a recent study by the Joint Center on Housing Studies at Harvard. 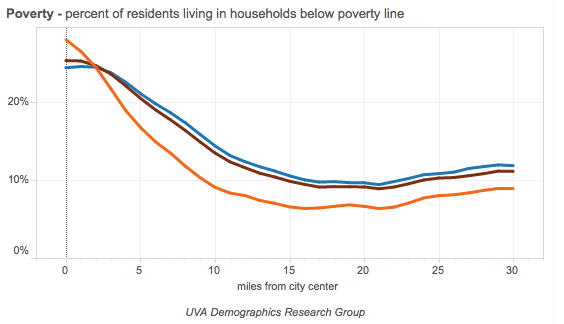 Here’s the takeaway from Cortright, who cautions against the simplistic narrative that poverty is decreasing in the “city” and increasing in the suburbs:

Its still very much the case that poverty rates are much higher closer to city centers than at the urban periphery. Luke Juday’s summary of the data for the 50 largest US metro areas makes it clear how strong this pattern is, and how little it has changed over the past 25 years. The poverty rate within 5 miles of the center of large metro areas (which are almost always the densest neighborhoods) are more than double, on average, the poverty rates 15 or more miles away from the center.

Cortright points out that poverty is increasing overall, everywhere, but remains focused in urban areas. While very close-to-the-center poverty rates might be decreasing, it’s still up within a 5-10 mile radius of the city center. This seems true for the core cities of Saint Paul, Minneapolis, and Duluth, despite the  shiny new apartments of the “back-to-the-city” real estate boom, and the growth of poverty in suburbia.

(For point of comparison, the borders of Saint Paul and Minneapolis are generally about 5-8 miles away from the downtown.)

PS. This kind of analysis always reminds me of the classic “urban geography” zone models from the early 20th century.