The August service change brings more cuts, and an overdue reworking of the routes in northern St. Louis Park.

All of the following cuts are to routes where better frequencies were implemented in an attempt to attract riders, but ridership hasn’t met expectations.

On weekdays, the Red Line BRT will run every 20 minutes instead of every 15 minutes.

On Saturdays, the two St. Paul branches of Route 3 (Minneapolis-St. Paul via Como Avenue) will run hourly instead of every 30 minutes.

On weekdays, Route 27 (26th-28th Street Crosstown) will run every 30 minutes all day long, instead of more frequently during the rush hours.

On weekday middays and Saturdays, Route 65 (Dale Street Crosstown) will run every 30 minutes instead of every 20 minutes.

On weekday middays and Saturdays, Route 67 (Smith Avenue-West Minnehaha Avenue-East Franklin) will run every 30 minutes instead of every 20 minutes.

On weekday middays and Saturdays, Route 87 (Rosedale-Raymond Avenue-Highland Park) will run every 30 minutes instead of every 20 minutes.

The cuts on Routes 65, 67 and 87 undo some of the feeder service increases implemented when the Green Line opened.

A handful of express trips will be trimmed around the system.

The west end of Route 9 leaves downtown Minneapolis on Glenwood Avenue. Over the years the portion of it extending into St. Louis Park split into more and more branches in an attempt to serve multiple neighborhoods and traffic generators. Working around highway and railroad barriers made this problem worse. Now there were six terminals and it was confusing to say the least (see first map). 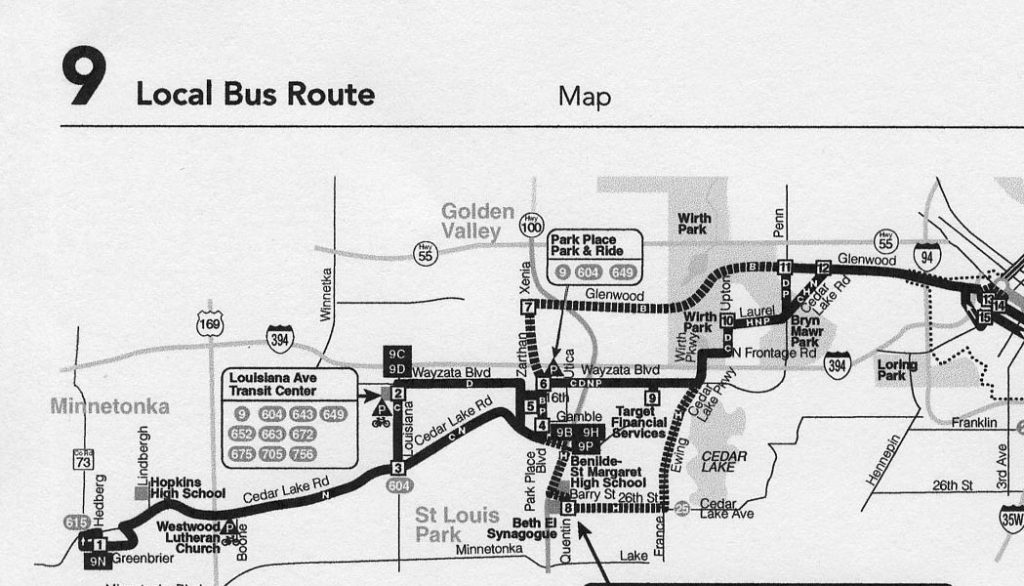 The decision to simplify Route 9 was driven by two factors.

Service levels stay about the same, but the result is the much simpler route structure shown here. 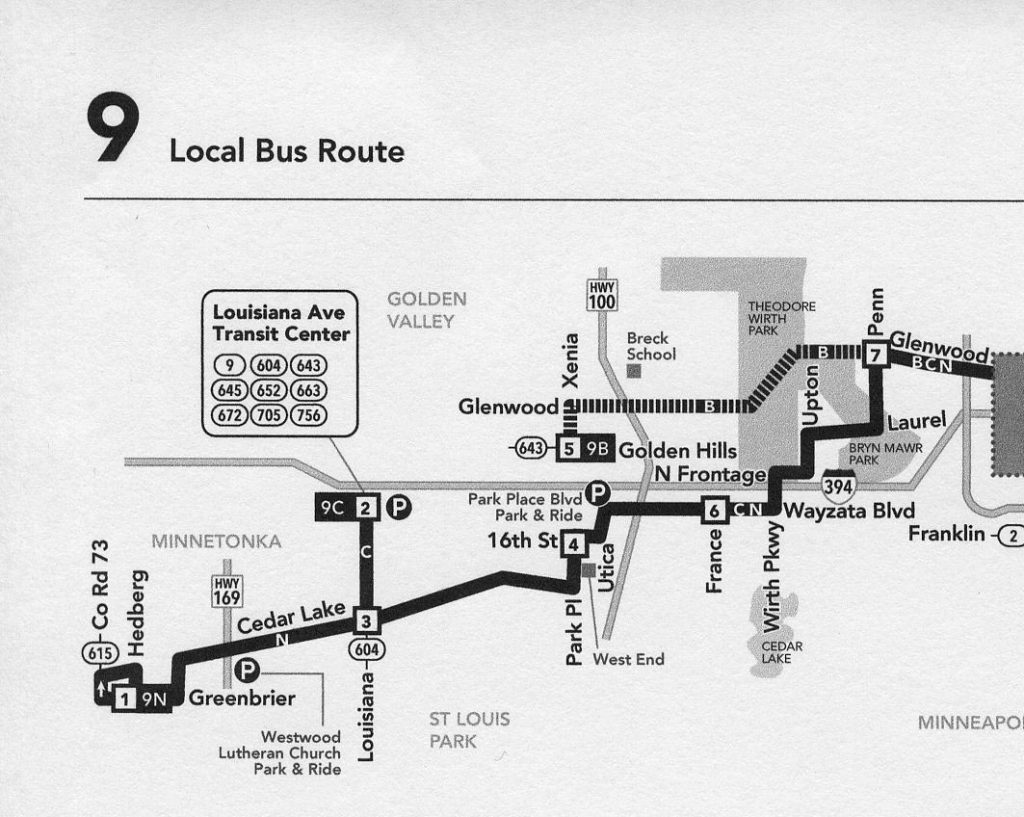 The current 9H that serves the neighborhood west of Cedar Lake with a handful of peak-only trips was tacked onto the Route 25 Kenwood bus to avoid eliminating their service altogether.

The West End area had also received peak period express and reverse commute service via Route 649, which uses I-394. Under this new plan, Route 649 is folded into Route 675, the all-day Mound-Wayzata-Ridgedale route that runs on the service roads of I-394. The new combination is called Route 645. It simplifies the route structure and adds service to the West End area in exchange for about a 3-minute running time penalty for riders west of there.

Here’s the summary map of the changes. 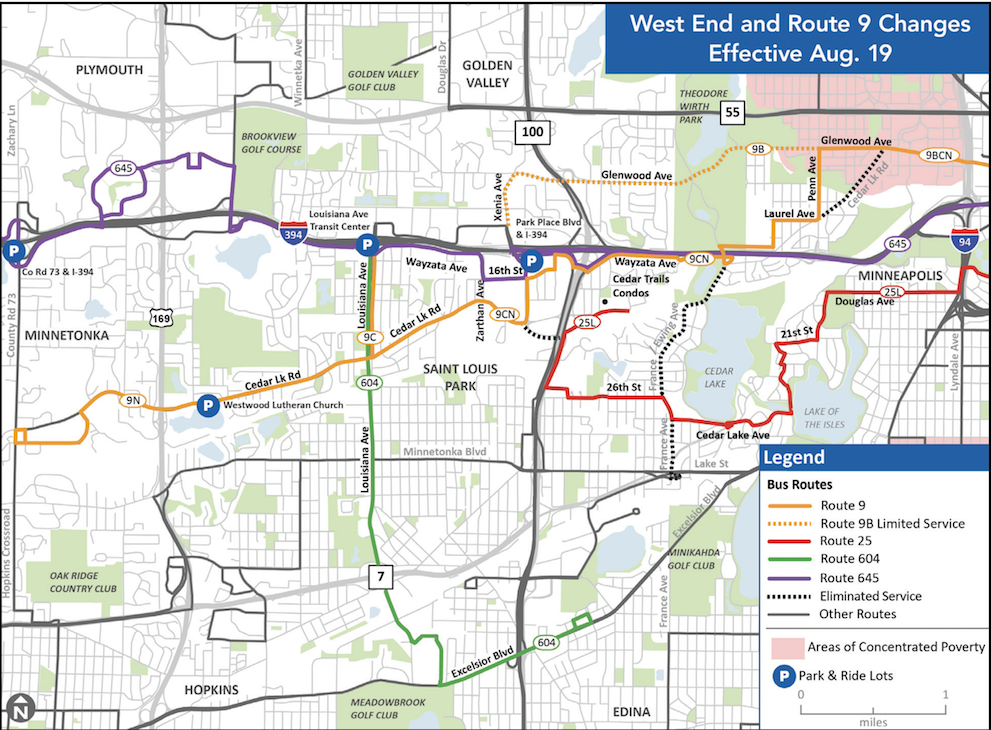 The limits of suburban off-peak service

About a month ago I needed to travel from Shakopee to Minneapolis during the midday without a car. Surprisingly, that trip was possible thanks to the experimental MVTA Route 495 that connects Shakopee to Burnsville and Mall of America. You may recall it was implemented, along with a South West Metro route to Eden Prairie, in an attempt to serve reverse commuters to Shakopee, including the new Amazon fulfillment center.

I was dropped off at the Marschall Road Transit Station/Park-ride, an attractive facility located next to Hwy. 169 in the sprawl landscape on the east end of town. 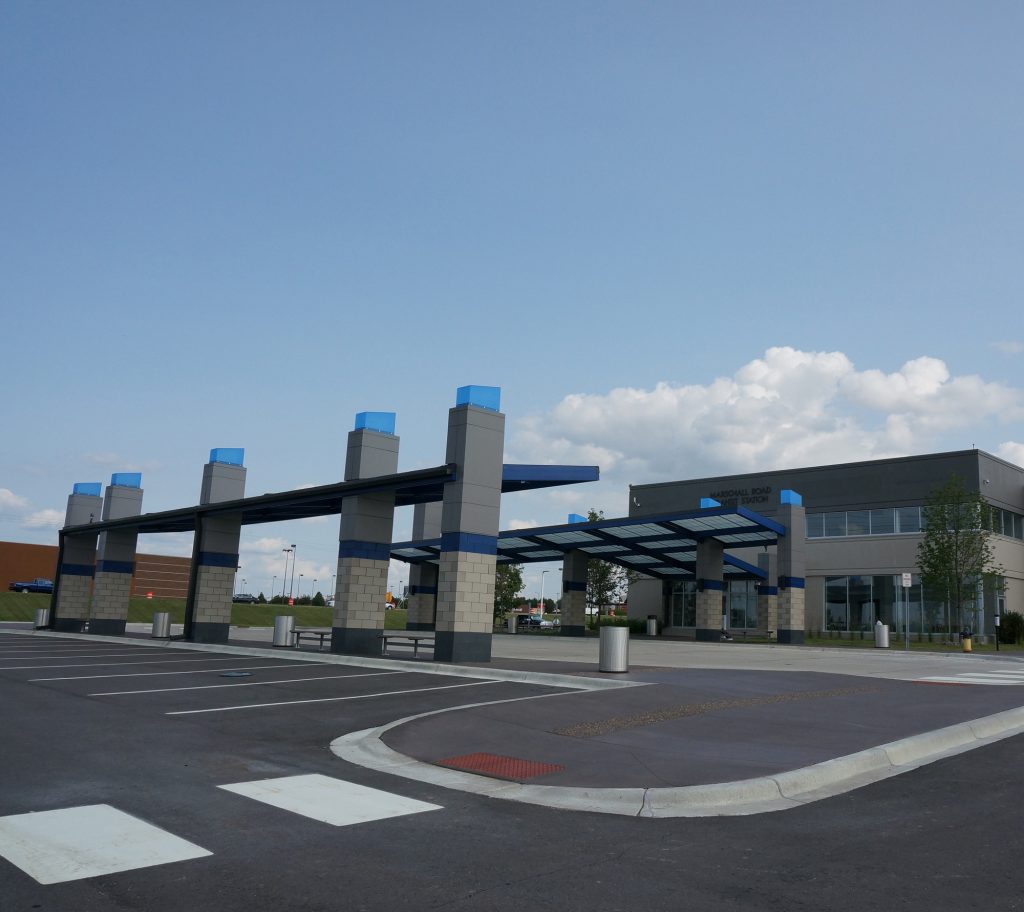 Once an hour, the 495 is scheduled to make timed transfers with a pair of minibus feeders that cover Shakopee and a shuttle from Mystic Lake Casino, another big employer. Hourly frequency is pretty bare bones, but if you’re transit dependent, it’s a whole lot better than nothing.

All the buses arrived and a total of less than ten passengers boarded or alighted. That’s the challenge here. Given the modest funding available, MVTA has done the best possible job of creating a transit network that will take you most places with transfers that are assured. But if not enough people use it, it can’t be sustained. That’s why the Eden Prairie-Shakopee Route 638 was discontinued last March.

I rode the 495 to Burnsville Station, the next timed transfer point. The 12-mile non-stop trip on freeway and 4-lane highway couldn’t be faster, but with only five passengers, the subsidy per passenger must be well over the limits set by the Met Council.

At Burnsville I made a timed-transfer connection to Route 465 headed for Minneapolis. 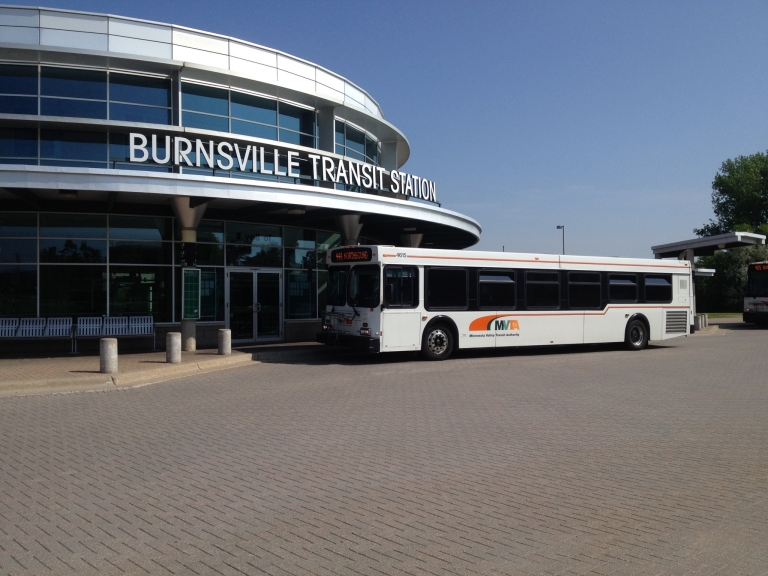 While I waited, the two legs of Route 444 to Savage and MOA via Eagan made appearances and picked up one passenger between them.

The 465 arrived and a few of us boarded. Eventually this route and Metro Transit Route 535 along I-35W will be replaced by the Orange Line BRT. The passenger potential is certainly greater here than in Shakopee, but the Orange Line will probably have only modest ridership, even though it will be a well designed service.

That’s the challenge of transit in the suburbs–lots of vehicle miles to serve a rather small ridership base. Make no mistake, transit dependent people live in the suburbs and deserve basic mobility, but it’s expensive to provide it. Off-peak suburban bus services are unlikely to attract choice riders. That’s just the way it is.

9 thoughts on “The Quarterly Transit Report–August 2017”