Minneapolis mayoral candidate Raymond Dehn recently released a position paper on affordable housing. It’s by far the most detailed housing policy paper any mayoral candidate has released to date. From a high level perspective, here are a few of the key points:

Priority #1 for Dehn is increasing funding to the Affordable Housing Trust Fund (AHTF). Currently, this is funded with roughly $10 million annually, and these funds are used to subsidize a small number of affordable housing projects. Adding money to this fund is a slam-dunk as far as priorities go, as it helps finance construction of new affordable housing, which is needed to remedy the ongoing housing shortage.

How is this money used? As an example, an affordable housing development proposed for 510 W. Lake Street would use $3.3 million from the fund, with $500,000 of that in the form of grants and the remaining $2.8 million in the form of a low-interest loan. The total cost of this project is $24 million for 128 units (making this particular housing very inexpensive on a per-unit basis), so the AHTF money helps this project financially possible. 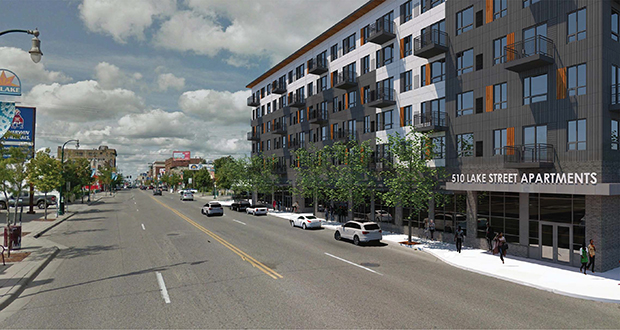 The proposed project at 510 W. Lake Street uses the Affordable Housing Trust Fund for a portion of its financing.

Dehn proposes adding funding to the AHTF in three possible ways: through linkage fees, a “Luxury Housing Tax,” and a municipal bond.

Linkage fees are essentially an additional tax on new development based on total square footage. This would directly increase the costs of new construction, a cost which would ultimately be paid by the tenant in the form of higher rent. This type of tax is an example of a “make new housing pay” philosophy. If you’re someone who believes building more market-rate housing in the region is a positive for affordability, you won’t like this idea. Adding to the cost of construction would result in fewer market-rate projects being proposed, but those that are built would have to chip in to the AHTF above and beyond standard property taxes. High-margin luxury units would likely continue to be built, but less-profitable market-rate housing projects (“workforce housing”) would become more rare.

The “Luxury Housing Tax” would be an additional tax on all housing units valued at over $500,000. Right now, this would primarily impact single-family homes near southwest Minneapolis, and very few condos or apartments. Track 29 City Apartments, which many consider “luxury,” recently sold for less than $270,000 per unit. This is more of a “make wealthy homeowners pay” approach, in contrast to the linkage fees proposed above. (Jacob Frey has proposed something similar, starting at $300,000. Both Frey and Dehn support some kind of value-capture tax, which would set aside some increases in tax revenue resulting from property value increases and dedicate it to affordable housing.)

A municipal housing bond is another option proposed by Dehn to raise a large sum quickly. This “make everyone pay” method of funding, as a municipal bond would spread the responsibility for funding affordable housing across a wider base, including new tax-paying households, the city’s strong commercial tax base and acres of single family homes.

Dehn also proposes reforming the exclusionary zoning barriers that are in place across the city. As Dehn puts it, our current zoning code is “rooted in the legacy of discriminatory practices around housing in our city.” Zoning has a long exclusionary history connected with the redlining practices of the 1930’s. Over the years, Minneapolis has continued to tighten the zoning code, such as in the mid-1970’s, when new apartments stopped being allowed in certain neighborhoods. 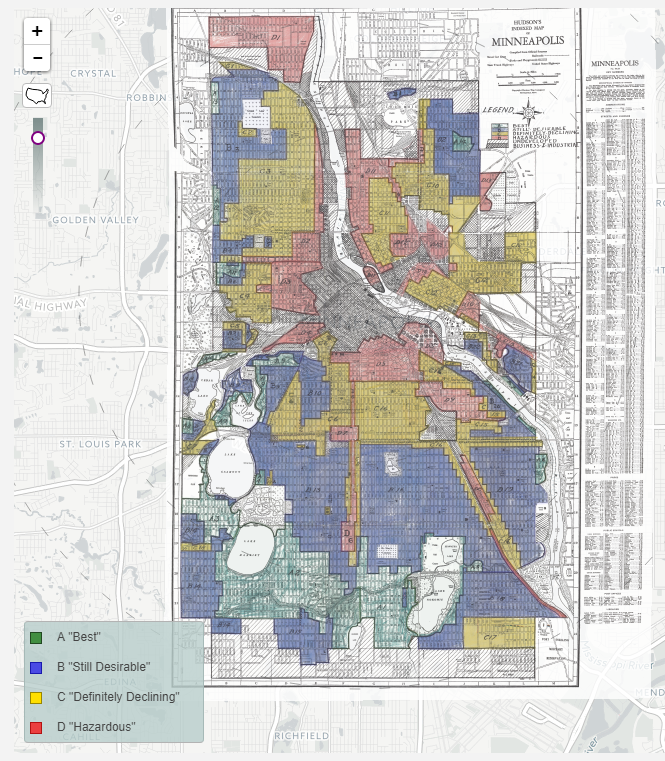 Redlining was used to keep cities segregated until the passage of the Fair Housing Act. It’s the foundation of “modern” institutionalized zoning.

Regarding zoning, Dehn outlines two major policy proposals. The first is an inclusionary zoning policy, which would require developers of new market-rate housing to set aside a certain percentage of units as affordable. This would lead to better racial and economic integration across the city. The drawback to this requirement is that this would also likely curb new housing construction. For an inclusionary zoning policy to work, it must ensure that new housing continues to be built. Currently, Minneapolis allows (but does not require) up to a 20 percent density bonus if 20 percent of units built are affordable, but that’s rarely taken advantage of. Other policies, such as reducing parking requirements in affordable buildings, or upzoning to allow more units in new buildings, are required so that such a policy does not damage our long-term housing needs.

The second zoning proposal is advocating for allowing mid-size housing in neighborhood interiors via upzoning, as well as allowing duplexes and triplexes in “some” areas that are currently zoned for single-family homes. This could allow some single-family homes to be converted into duplexes, which would put a small additional number of affordable units on the market. Rather than limiting this to “some” areas, I believe it would benefit the city to allow duplex and triplex construction across the city.

Dehn advocates for ending the state’s preemption on rent control, which I assume means that he supports rent control itself. Rent control sounds like a good idea on its face (“Rents are going up, this stops that”), but hasn’t worked very well in practice. Many of the least affordable cities in the United States (New York City, the Bay Area, Washington D.C., etc.) have rent control policies in place, with rent control covering a large share of housing units.

There is very little evidence that rent control is effective in stopping rising rents. We do not want a city where people are “trapped” in a rent-controlled apartment and unable to move, and we need to ensure that housing is affordable to all, not just those in rent-controlled buildings. Rent control is also likely to slow new housing construction, which is the opposite direction the city should be moving in during a housing shortage.

There are a number of other items included that pertain to renter protection in Dehn’s platform which are sorely needed. A renter’s commission and just-cause eviction ordinance are both long overdue, and both would strengthen the position of renters to city government and landlords, respectively. A Tenants’ Right of First Refusal would allow tenants to pool resources and purchase a building if it has been sold, which is worth looking at as a method to preserve Naturally Occurring Affordable Housing.

Like several other ideas referenced in the policy document (funding housing cooperatives, funding community land trusts, helping renters erase eviction records), it’s not clear where the resources to fund these proposals is going to come from. For example, a right of first refusal will not have a significant impact unless financial assistance is provided to tenants who wish to purchase a building. What’s clear is that the city needs more money in the overall housing pool, but where that money comes from and how it is spent determines how equitable this city will be.