In front of Minneapolis City Hall, some of my favorite things are currently on display: Minneapolis landmarks, public transportation, and selfies. 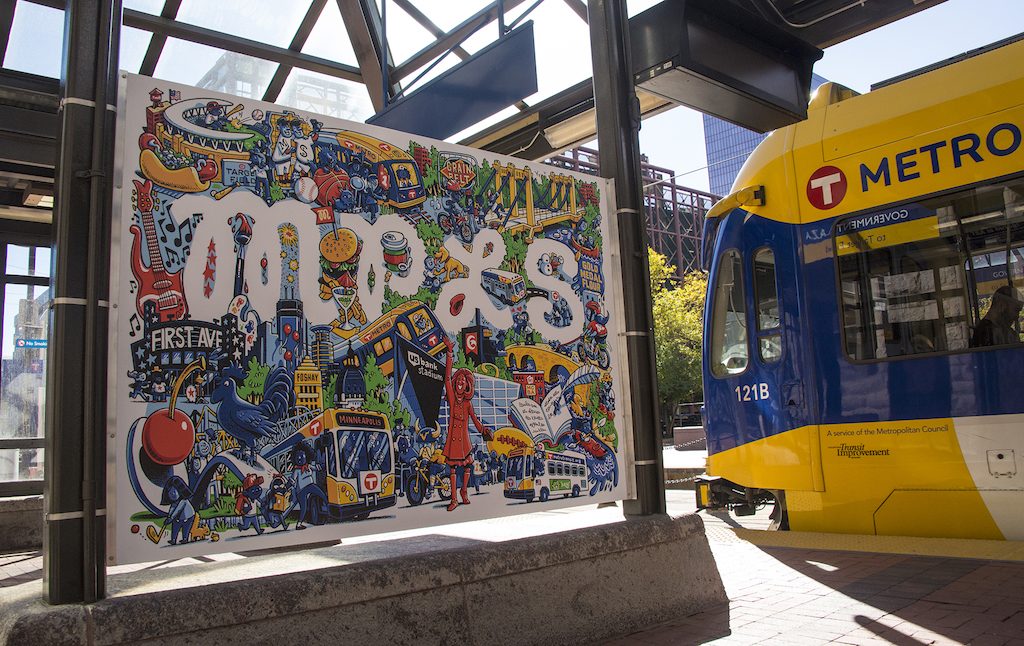 “We Are Metro Transit” is a public art installation that will be temporarily displayed at Government Plaza Station from mid-October through mid-November. One side of the display features artwork depicting transportation and downtown Minneapolis by local cartoonist Kevin Cannon. The other side is a collection of photos submitted by Metro Transit riders. Over the course of a month, a montage of photos will illustrate the diversity of our riders. 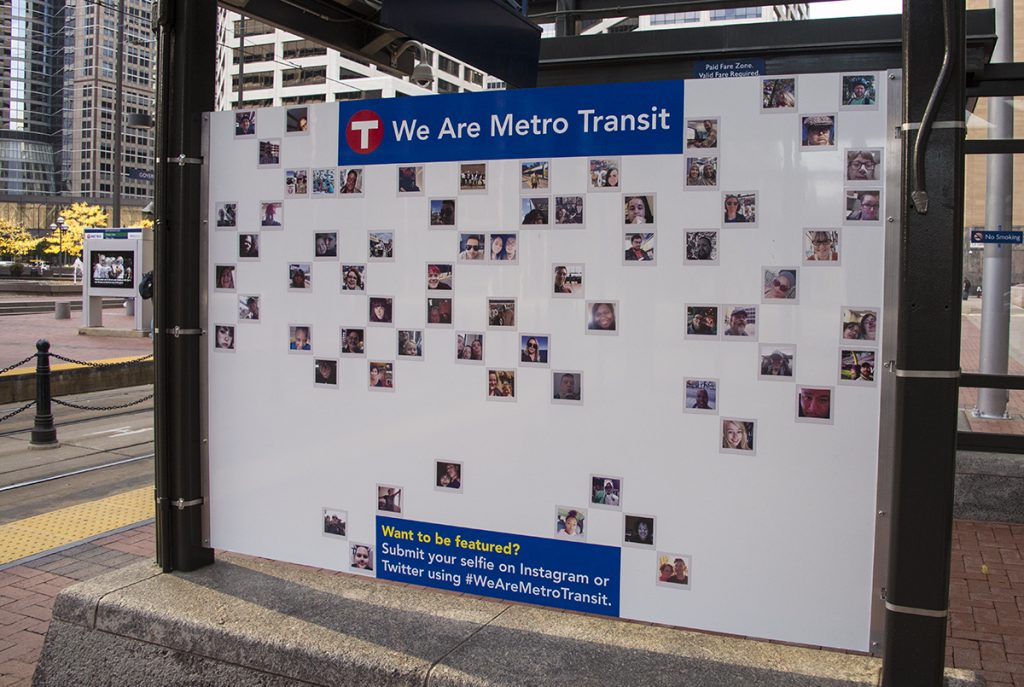 To participate, all you have to do is post a photo of yourself on Instagram or Twitter and use the hashtag #WeAreMetroTransit. It could be anywhere – a selfie on transit, a photo of you at your favorite location in the Twin Cities, anything! Your photo will then be printed as a polaroid and added to the mosaic of Metro Transit riders on the installation at Government Plaza Station. You’ll be able to see your photo along with everyone else’s if you stop by to see the art installation at the Government Plaza. 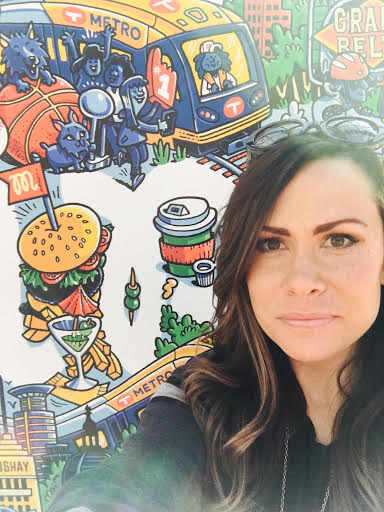 I wanted to know more about this crowd sourced project so I got in touch with Kathy Graul, Digital Communications Specialist for Metro Transit and asked her a few questions.

How did you come up with this idea?

Kathy: I’m always looking for unique ways to tell stories about Metro Transit and our riders through social media. Last fall, I experimented with a social media engagement project called the Yarn Bus, in which we commissioned a well-known local street artist, Knitteapolis, to “yarn bomb” the inside of one of our buses. It traveled on regular route service for two months, and riders shared their Yarn Bus experiences on social media using hashtag #yarnbus. The feedback was overwhelming – riders LOVED the Yarn Bus.

Along those same lines, I wanted to develop another project this year that incorporated a local artist and provided an opportunity for our riders to engage in the project in some way. I also really love polaroid photography, and it’s become popular recently as inexpensive, modern versions of the classic polaroid cameras have become available. I thought it would be neat if we could feature polaroid-style photos of our riders in a mosaic at one of our light rail stations.

So I melded the concepts together into “We Are Metro Transit,” which allows riders to submit their photos through social media using #WeAreMetroTransit, and their photos are then automatically printed as polaroids and added to the display at Government Plaza Station. The display also features an amazing illustration by Kevin Cannon, a local cartoonist, for riders to enjoy as they wait for the train.

What are the goals of “We Are Metro Transit?”

Kathy: I hope that people who see the installation take a moment to notice the diversity of Metro Transit riders as the display fills in with photos. And I hope that those who participate recognize that they are a part of a vibrant community of Twin Cities transit riders. Maybe they’ll see someone they know, or have seen on the bus or train before, as they look through photos of other riders.

I also hope that the installation simply provides an unexpected, pleasant surprise for passersby.

How was Government Plaza Station chosen?

Kathy: We wanted a location served by both the Blue and Green Lines in downtown Minneapolis for high visibility. Every light rail station is configured differently, and we needed one with enough room for a large art installation; Government Plaza was the best fit.

Are there plans for additional locations or public art installations with rider participation in the future?

Kathy: Yes, I hope these engagement projects continue to develop into an annual experience for our riders! We welcome feedback and ideas: kathy.graul@metrotransit.org.

What else would you like streets.mn readers to know?

Kathy: We want everyone to be included in We Are Metro Transit. If you know someone that does not have access to social media, but they would like to be included, their photo can be added to the installation by emailing it to me at kathy.graul@metrotransit.org. 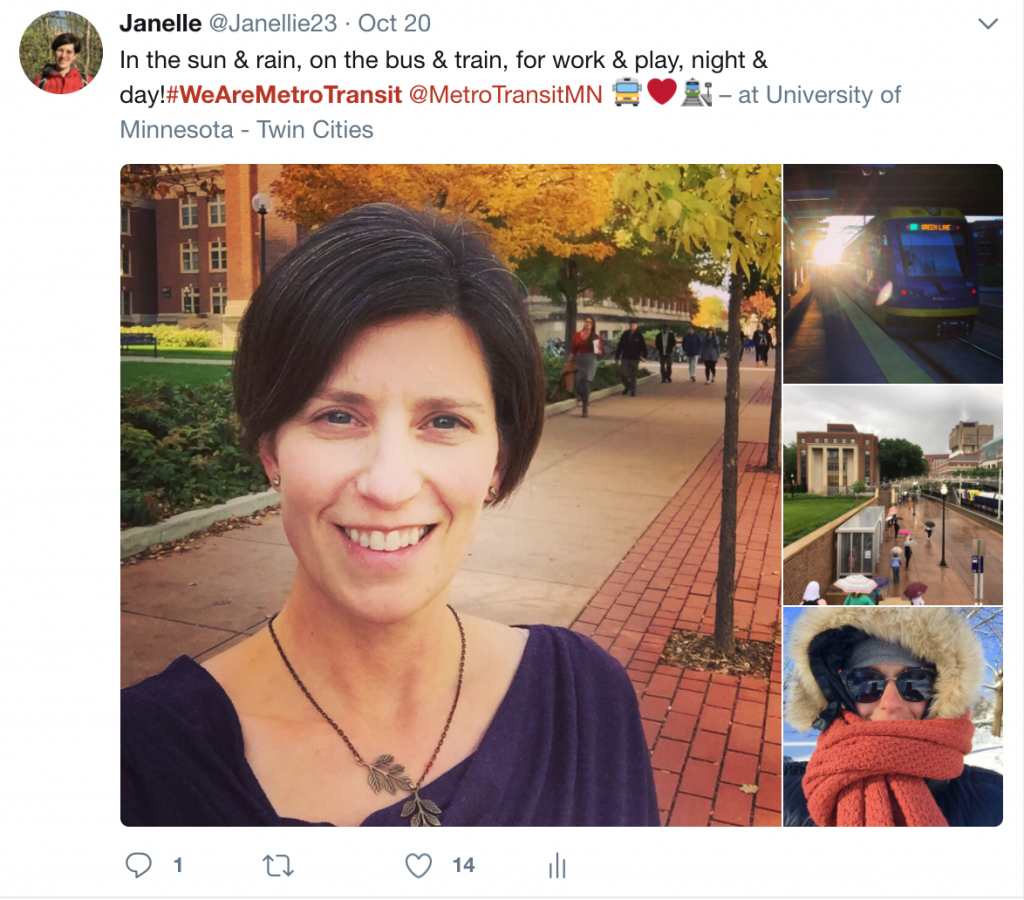 Kevin Cannon is a Minneapolis-based cartoonist who has produced maps for alt weeklies, theme parks, and film studios. He developed a love of cartography in London during college, while flipping through fragile maps of the Arctic tucked away in centuries-old travelogues. He enjoys working next to an open window, preferably with a hockey game on the radio in the background.

Kevin: Metro Transit told me they wanted my interpretation of downtown Minneapolis and for it to be something big and colorful enough to inspire the public to take selfies in front of it. My work is usually full of lots of little details, but because this art would be installed in a public place, I wanted it to have some element that could be seen from a distance, hence the big “MPLS” letters in negative space.

For this Minneapolis themed artwork, how did you select the landmarks to include?

Kevin: Minneapolis is rich with iconic landmarks, so the hardest part of this project was figuring out which ones to leave out. I tried to balance out peoples’ interests so that everyone who visits Minneapolis and sees the mural will (hopefully) be able to pick out something they know and love. Target Field and US Bank Stadium are obvious crowd pleasers for the sports fans, and I definitely wanted to put in the MCBA [Minneapolis Center for Book Arts] and the Guthrie for the arts lovers. I regret not being able to fit in the Central Library or any of the amazing restaurants in Minneapolis. Maybe I’ll work on a larger, more exhaustive map someday…

Does this artwork include any inside jokes or stories you’d like to reveal?

Kevin: Of course! I always try to sneak in my fiancée somewhere, and her nephew Marty and niece Louise usually find a cameo appearance as well. I was working on this map during the WNBA finals, so I made sure to include the Lynx mascot with the championship trophy as well. [editor’s note: I love this project even more knowing that it celebrates the best professional sports team in Minnesota!]

Kevin: My first apartment out of college was on Franklin & Hennepin in Uptown, and my bedroom window looked directly out onto a Metro Transit bus stop. So just for nostalgia’s sake, that’s probably my favorite stop. And my favorite route would have to be the 6, because a long time ago that was the route I took to get from St. Louis Park to Downtown Minneapolis for my first comic book studio internship. And my dream route? Anything that could take me from my front door to Indeed Brewing. The 10 bus is pretty close.

What are your favorite streets and intersections:

Kevin’s parting advice: Run down to Government Plaza station and get a selfie before it’s gone!

Fun fact: Kevin’s 2017 Independent BookStore Day was featured in my Independent Bookstore Day Walk post. I was first introduced to Kevin Cannon’s art when I worked at Grinnell College, his alma mater. I still have a hoodie featuring one of his earlier cartoons. As a former career counselor, I absolutely love his account of becoming a cartoonist.

4 thoughts on “We Are Metro Transit: Snap a selfie before it’s too late!”