A History of Bicycle Helmets

Advocacy for wearing bicycle  helmets is almost as old as bicycles themselves. In the 1880s bicycle clubs began to advocate for the use of helmets. Eventually racers began to use helmets, first leather pith-type helmets, then leather ring-type “hairnet” helmets, but helmets were unknown in non-race bicycling. 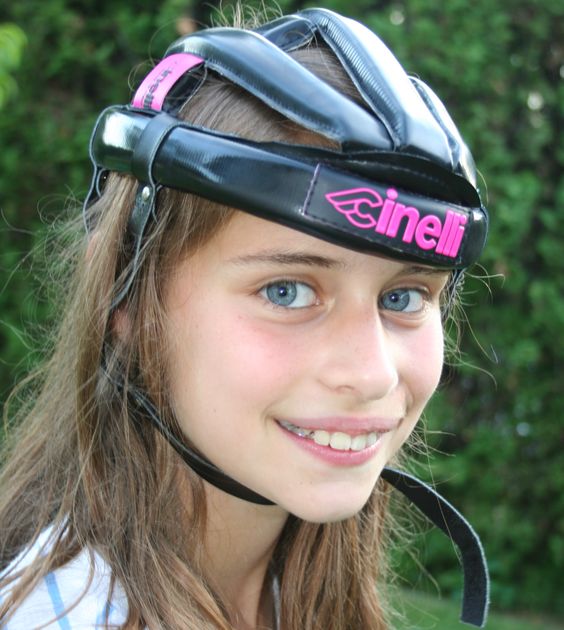 The first thing resembling a modern bicycle helmet was put out by Bell Sports in 1975, the Bell Biker, which was a modification of motorsports helmets, made of polystyrene foam with a hard Lexan shell. These continued to evolve into the early 1990s (most noticeably by replacing the act of threading the chinstrap through rings with a quicker to use buckle).

Hardshell Bicycle Helmets: The original “Bell Biker”, the Bell Biker II, The Windjammer and Viva (put out by Bell but without using their name).

Hardshell bicycle helmets have stuck around in a way; they’re now smooth, rounded “skateboard style” helmets. Traditional bicycle helmets are designed to be well ventilated and protect for a single higher speed crash only before being replaced. The skateboard standard calls for limited multiple impact protection at lower speeds and ventilation is a secondary concern since you aren’t constantly working , and generally more back of the head protection since you can fall backwards off a skateboard easier than a bicycle.

But some people choose to use skateboard style helmets (which have further morphed into “urban” style helmets) on bicycles despite the drawbacks, so many are certified for bicycle use. In fact some “skateboard style” helmets are only certified for bicycle use, not skateboarding. All the manufacturers have a “skate style” or “urban” design, but Nutcase and Bern are the two the specialize in them. Also, from the UK you have Yakkay brand helmets, which are a basic skateboard style helmet with various soft hat-like coverings. It seems to me these would be unbelievably hot, but at least you don’t look like you’re wearing a helmet. In the late 1980s came improvements in the foam that negated the need for a hard, heavy outer shell. One of the first, the Bell Ovation, had a soft lightweight shell that was taped to the foam, but more commonly they had no shell at all. Most of them had a Lycra cover to make it at least look like you weren’t wearing a Styrofoam picnic cooler and to provide a bit of protection from handling damage.

Unfortunately in practice these tended to shatter into pieces and scatter at the first impact leaving the user vulnerable to further impacts. Manufacturers experimented with embedding wire mesh, but ultimately returned to soft shells. The color of the foam eventually generally changed from white to black to reduce the “picnic cooler” or “mushroom-head” aesthetic, as well as colors of the shell other than white or black becoming available. Two more colorful examples, but still the outer shell is taped to the foam. The main problem with the band of tape was aesthetic and it could eventually deteriorate so the shell could separate from the foam. Some of the ultra-cheap helmets today, like the ones sold in discount stores or given away for free at helmet giveaways still have taped shells, but they’ve mostly been supplanted by in-mold shells.

In the early 1990s came another innovation: injection molding the foam into the shell, rather than manufacturing them separately and then taping them together. Initially it meant the front strap or strap anchors were exposed, but later on they figured out how to make them recessed. Of course, the trend towards  models with more and more vents came out. In the mean time, an occipital lobe retainer became standard; this is the strap that runs across the back of the head. Later came one-size fits all ring fit systems, where you tighten a fastener on the retainer rather than having multiple sizes of bicycle helmets and further fine-tuning fit by swapping out different thicknesses of pads. Recently Bell has come out with the “Tru-Fit” system that eliminates fiddling with the straps to adjust it and thus also eliminates improper wearing position. It’s found mostly on their cheap discount store line. I find it works as intended but the elastic it requires makes it feel noticeably tight compared to traditional fit systems. Specialized has also has similar system called “Twin-X” for most of their line.

The most recent development is MIPS” Multi-Plane Impact Protection.” One of the criticisms of bicycle helmets is they can increase the torque applied to the head in the event of a crash, MIPS is basically a layer of slick plastic that allows some slippage between the head and the helmet. Whether this makes a difference in the real world remains to be seen. Generally the plastic is a bright yellow to draw attention to the fact that it’s there to potential buyers. Bicycle Helmet with MIPS (as well as a front bug net to keep stinging insects from being sucked into the front vents, a feature more common in European bicycle helmets)

So with all these advances in technology, is your new $200 bicycle helmet safer than your old one from the 1990s? Probably not.  There have been various safety standards at different times and places but there have been no real-world differences noted since the adoption of the ASTM standard in the late 1980s. No manufacturer is going to come out with a design that is marketed as “50% safer than brand “X”, for a number of reasons.

If you look online for recommendations; you see the suggestions to chooser white or bright colors to be more visible, or having a rounded shape, or few vents. But does having a bright, visible color make a difference for safety? In the UK they did a study on what they quaintly call “Smidsy” crashes– Sorry, Mate I Didn’t See You.  It involved motorcyclists, but the same principles presumably apply to bicyclists. They found that even high-visibility clothing didn’t consistently improve visibility in a crowded urban environment.

At city street speeds on crowded urban arterials the visual kaleidoscope can simply overwhelm the motorist’s senses to the point they won’t even see and process something as important as traffic signals – the trend to more, larger signals overhead is needed to overwhelm all the other visual clutter. A white bicycle helmet as opposed to black is just too subtle to make a difference. (and it’s a myth black helmets are hotter – at riding speeds the wind carrying off any heat makes this moot). The safest bicycle helmet is one that’s stylish and cool enough to actually be worn regardless of merits of minimizing the number of vents or having a loud color.

And how often should you replace your bicycle helmet? Turns out not very often unless you were involved in a crash or just because you want to. You read that you should replace them after as little as two years. However a recent study collected helmets from the general public dating back to 1987 and tested them and found no significant difference in the performance of the foam lining. And even the cheapest ones meet the same safety standards. The one you bought for $10 in 1990 is probably as safe as a $200 one nowadays. The takeaway from all this is that a bicycle helmet is more or less a bicycle helmet.

The Statistics: Bicycle Helmet Use in Minnesota

Here are the results of an observational study on bicycle helmet use in Minnesota from the past two summers, from my mental and written tally sheets at times and places I’ve been. True statisticians would criticize that time is an uncontrolled variable  I obviously don’t know the exact population size (although data might exist in certain locations), but I do think this gives a reasonably accurate sense of bicycle helmet use. If you assume a population of hundreds of thousands of bicyclists over two years the data is probable accurate to within 5%. For the most part data on the trails  was gathered on “nice riding days”- when I as well as others were out bicycling. In most locations, several hundred adults were tallied.

Here’s the data for the Minneapolis parkway off-road paths. In this and all graphs, data for kids was only included when I tallied 20 or more in a given location. Also note usage by men and women is close, probably within the margin of error, but I recall there was a much more significant difference between men and women when I did this 10 years ago (and lost the data). Men were around 50% while women were about the same at 60%, which is why I separated them initially for this study. “Kids” is anyone from the low teens on down, and adults were higher teens on up. I originally attempted to tally data for teenagers separately but was unable to do so because of how few teenagers apparently ride bicycles, and it was difficult to classify riders into three classes instead of two. Now the Minneapolis Parkways in comparison to other areas. “Minneapolis” is areas not on or immediately adjacent to the parkways in Minneapolis (and a few from St Paul). “Inner Ring Suburbs” are riders on mainly streets and sidewalks suburbs with grids, mostly east Bloomington. “Outer Ring Suburbs” are suburbs with twisty streets and usually bicycle paths along the main roads, mainly Eden Prairie and Shakopee. You also have Hyland Park in Bloomington, the Browns Creek Trail outside Stillwater, and the Root River Trail by Lanesboro. Notice how low I don’t want to get too much into speculation about the reason for the differences, I’ll let others do that. I only note that areas where bicycles are transportation have much lower bicycle helmet use than areas for recreation.

Possible future investigations: There are a few interesting observations that I didn’t investigate. Different city neighborhoods probably have vastly different usage rates (and thus of all my data; lumping the data for the city of Minneapolis together, even excluding recreational trails, downtown, and the U,  probably made it meaningless). Also I noticed bicycle helmet use seems essentially nonexistent in small town Minnesota. I spent several days in Kenyon helping to dismantle a fence and I didn’t see a single rider with one there or on the way there.

Helmets are also recommended for inline skating. I found usage of about 20% for both genders. I did not break this out by location but most inline skating is done on recreations trails. Now for the elephant in the room: We now have some idea how many Minnesotans use bicycle helmets, but should it be mandatory, or should they do it voluntarily. My take on the great bicycle helmet debate will be coming up next (so please refrain comments on that line until then).