Even though it was nearing the end of the season for a blogging bike ride, Mother Nature was with me this glorious October day as the temperature peaked at 76 degrees. It had taken more than a year to get this interview arranged. By the time I got home from work, changed into my biking attire, loaded up the bike and hit the road, it was about 5:30 which left less than 45 minutes of daylight. However, the thermometer still hovered at 70. The destination this late afternoon was 1162 Lafond Avenue to talk with Rita Dahlbeck, about why she accessorized her garage with license plates.

The trim on Rita Dahlbeck’s garage is the main display of her wide-ranging collection of license plates. I took this picture on a stop on August 2, 2014.

I, too, am a license plate collector, so seeing the plates on Rita’s garage made me want to learn about her and her collection.

Before Rita and I talked on the phone in 2014, I assumed her husband was the hobbyist since most license plate collectors are guys.

Rita’s house is free of the ornamental license plates.

Rita has lived at the corner of LaFond and Dunlap for almost 30 years and loves her neighborhood and her neighbors. In fact, she got many of the license plates in her collection from neighbors.

So what is it about license plates that captivates Rita? “They’re pretty. They’re colorful. You can go somewhere or know someone and get a post card or some little trinket and everybody has one. A license plate from a place you visited or someone you know, there’s a different connection there. It’s just more valuable to me. It’s personal and it’s not a trinket.”.

Collectors can find tens of thousands of license plates for sale online, but Rita refuses to expand her collection that way. “If someone hasn’t given them to me or if I haven’t acquired them from being in a place, I don’t really want them. I have to have a human connection. That’s my only rule.”

With that philosophy, pretty much all of the plates have a story. For example, Rita got a New South Wales plate from her brother “My brother is married to an Australian and when they went to visit one time, he said, ‘Do you want anything from Australia?’ I said, ‘A license plate, of course.’” She told me, laughing. “So my brother’s brother-in-law is a mechanic and a vehicle came in that was totaled and he had license plates, and he (her brother) said, ‘Well yeah, I’ll take those!’”

A neighbor presented the New Hampshire vanity plate to Rita. It’s one of several she’s gotten from generous neighbors.

Rita got a customized New Hampshire plate, known as a vanity plate with hobbyists, from a person who stopped by. “Some guy just said, ‘You’ve got to have this Live Free or Die New Hampshire that reads ‘Oink’.’” 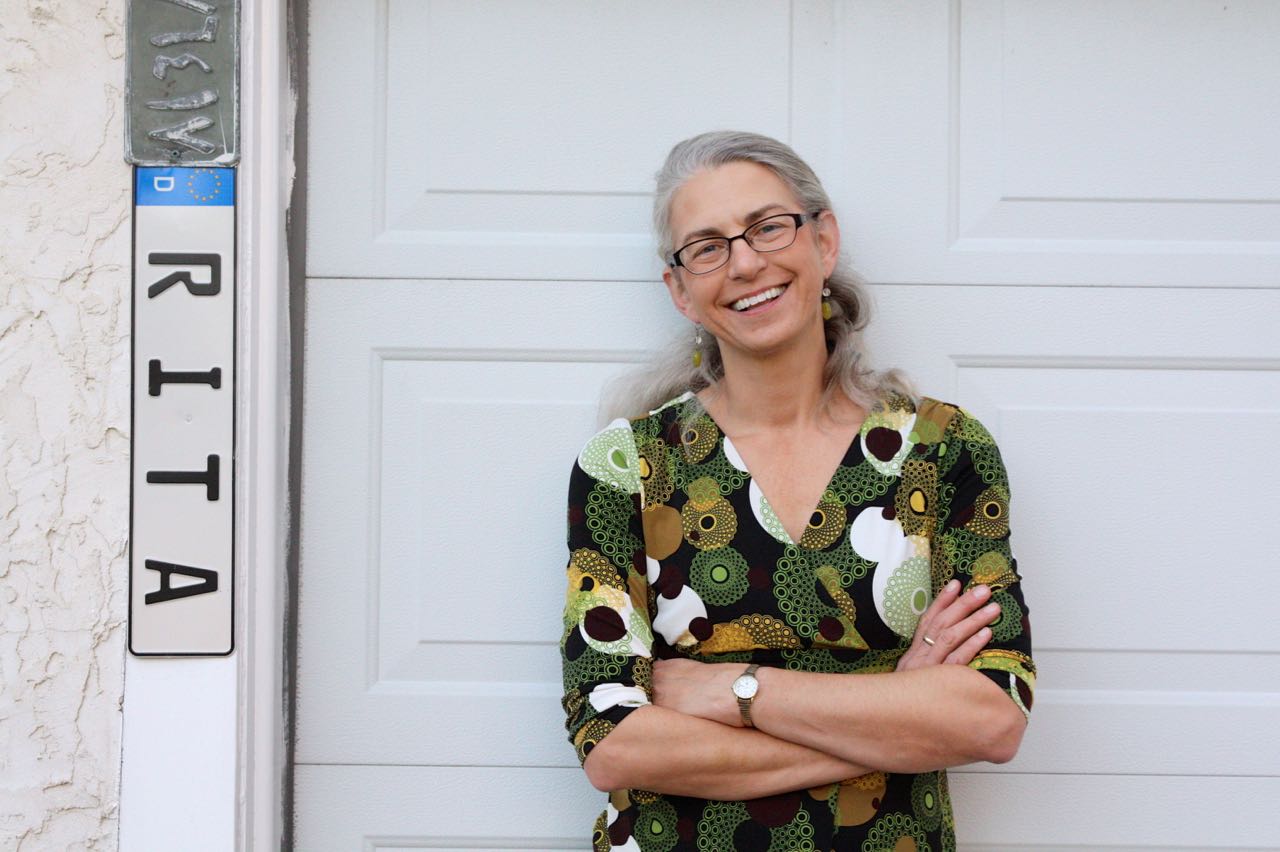 Rita’s German plate came from a friend. “A personalized plate from Germany! In Europe they don’t do personalized. He knew someone at 3M and 3M is in charge of getting the reflective on there. So he had it made for me!”

Not all of Rita’s plates are on display. She has some from 1920s and 30s in the house, and a box of plates in the garage.

The Little Free Library at Rita’s is also decorated with plates.

Rita put several plates on the Little Free Library on her property, along Dunlap Street. “I thought it would be great for little children to look at it and they could learn letters and numbers.

“He says we just have too much junk. He doesn’t have this affinity for acquisition that I do, let’s just put it that way.” – Rita on what her husband thinks of her license plate collection

It’s no surprise that walkers and bikers will ask or comment about her plates. “People ask if I’ve been to the places or they stand and look and try to find their state.”

These Minnesota license plates decorate a ladder that was attached to the silo on her Great Grandfather’s farm.

She had an odd conversation with a walker. “I have all Minnesota plates on a ladder which is from my Great Grandpa’s tree claim in South Dakota. He came here from Sweden, and that ladder, it had been on the silo, and I use it to put my license plates. A guy came up and he said, ‘Have you been to all those places?’ and it’s all Minnesota. I said, ‘YUP!’”

Rita plans to expand her collection. “I would like to get a plate from Spain because we have good friends there. I would love a plate from the British Isles because I was an exchange student there. But those are pretty tough. I don’t have Mexico or Canada! I should really just try to stay to this continent,” she said laughing.