You might have seen this chart making the rounds this week. It shows the relative size of US CO2 emissions according to electricity generation and transportation. 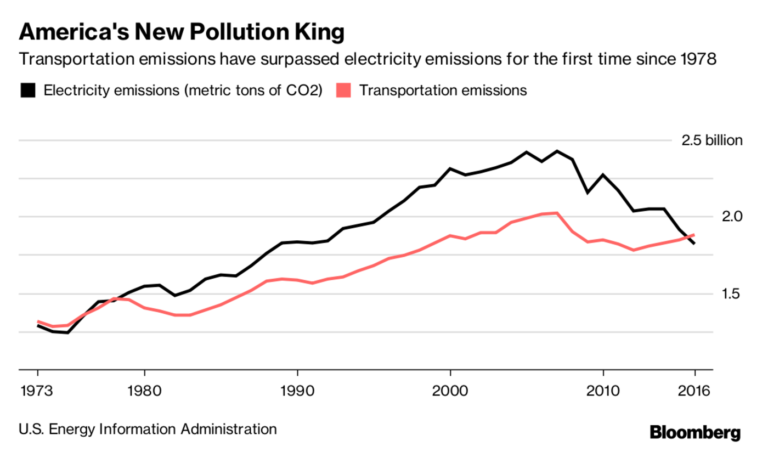 The article, via Ritholz’ blog and Bloomberg News, talks about the reason for the shift. It has everything to do with change power grid in the US:

For the first time in 40 years, power plants are no longer the biggest source of U.S. greenhouse gas pollution. That dubious distinction now belongs to the transport sector: cars, trucks, planes, trains and boats.

The big reversal didn’t happen because transportation emissions have been increasing. In fact, since 2000 the U.S. has experienced the flattest stretch of transportation-related pollution in modern record keeping, according to data compiled by the U.S. Energy Information Administration. The big change has come from the cleanup of America’s electric grid.

In some ways, transportation is a larger challenge for reducing CO2 in the US, because it’s so decentralized, with hundreds of millions of emitters (cars) instead of a few thousand (power plants).

Maybe electric cars will lead to a radical shift, though that also moves emissions back into the electricity sector? Maybe we can figure out a way to design cities that depend less on driving?

2 thoughts on “Chart of the Day: Two Sectors of CO2 Emissions”