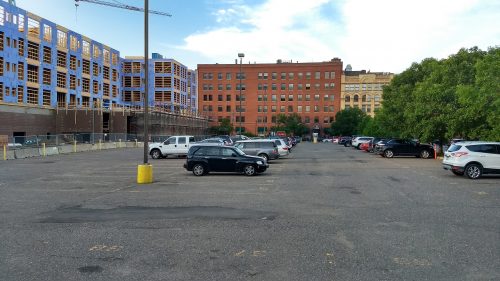 In 2016, Acme Comedy Co was the subject of the most high-profile movement to save a parking lot in recent Minneapolis history. If the owner of an adjacent parking lot was allowed to turn it into apartments, Acme’s owner predicted he would be forced to move his business out of Minneapolis to a parking-rich suburb. Nationally-known comedians rallied to Acme’s defense. Nearly 6,000 people signed an online petition to save a parking lot — in order to save a beloved comedy institution.

Today, with a new apartment building occupying that former parking lot, Acme owner Louis Lee tells the Star Tribune (in a story unrelated to parking) “Acme is enjoying its strongest business in a decade.”

This dynamic plays out on a smaller scale every week in neighborhoods across Minneapolis. Parking concerns are pervasive in a changing city. But people don’t usually pay attention long enough to check predictions against reality. We get headlines that say Neighborhood Threatened by Change. We never get the follow-up headline years later: Oops, Things Are Actually Just Fine.

So it’s important we honor bearded soothsayers like streets.mn writer Peter Bajurny, who was right all along. There’s one less parking lot in Minneapolis but the comedy business is booming in the North Loop. Go have your obnoxious “I told you so” moment, Peter — you deserve it.

7 thoughts on “Acme Comedy: The Parking Crisis That Wasn’t”